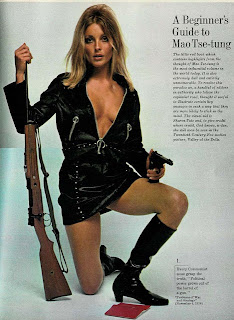 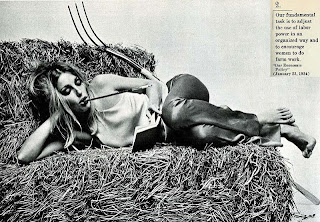 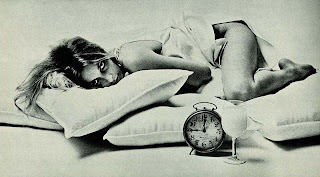 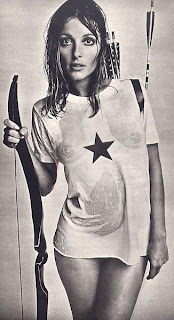 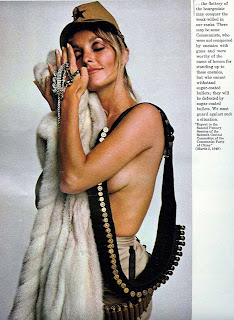 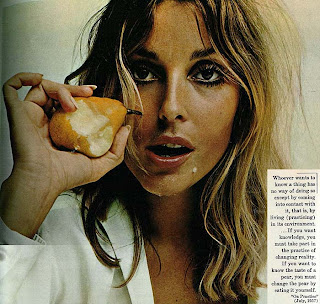 Now I will go back and read the words
;)

Hmmm. From what I have gathered Roman Polanski was at the time a true communist. But with this - like everything else - played by his own rules (living the Hollywood jet set life).

That being said, is Sharon supporting Roman being a communist, or is this just Esquire poking fun at Mao while also giving the movie a plug? My sense is that Sharon was doing her part to promote the movie.

I suspect this was just Esquire playing around with a topic that was prevalent at the time... from what I know (I certainly wasn't alive back then) Mao was in vogue with progressives in the West. The Yippies certainly used to brandish the Little Red Book.

My advice regarding the LRB: don't bother with it. Esquire's right, it's rubbish. The fact the New Left thought it was so groovy is just further proof of how twisted on drugs everyone was back then!

Matt, I don't think that's true. I have read interviews with Roman in which he says he doesn't understand Hollywood's love affair with Communism. He said he's lived under both Nazism and Communism and they were both horrific, especially for those in the arts. He was also happy when the Berlin Wall fell and when the anti-Communist and fellow Pole, Pope John II, was made Pope.

Roman Polanski was not a communist. He gave an interview a few years ago to Interview Magazine and I recall he ridiculed some of the figures of the French New Wave for their faux revolutionary posturing. Having lived through both Nazism and Soviet-style communism he's always indicated that he felt they were both awful systems.

(Also, sorry for the deleted comment above - I didn't realize my husband was already signed into Blogger so accidentally posted it under his username the first time.)

CarolMR - you're right; sorry if my comment was repetitive!

I love seeing photos of Sharon, particularly the ones I don't remember ever seeing before. I do not like the one with the gun in her hand or the one with the bullet belt (because I think they are a teeny bit unflattering to her perfect body, not because of the gun or the bullets), but the other photos really do show amazing face and gorgeous figure. The shots are all fun and irreverent; typical Esquire! And the one with the mushy pear dripping down her chin, LOL! Thanks for posting these.

I dunno. I find these photos really poignant. The capture the mood of the time, the sentiment that helped to lead our beloved perps to do what they done. We must remember the context of the times and Sharon is giving it to us right here. RIP

Patty sounds like a goddamned apologist and for this she is sorry. Her humanism runs away with her sometimes.

They are nice but the sexism, Jesus. I hate communism, but at least Mao said "women hold up half the sky". The girls of China were inspired to fulfil their potential, not lie around on fur rugs. Somehow this set leaves a bad taste to me.