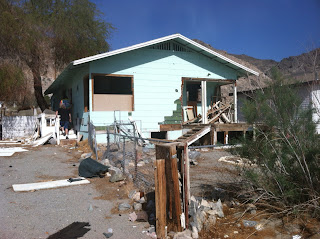 First stop on the way to Ballarat was the former home of TJ Walleman in Trona.
(photo taken at Marc's request. lol.) 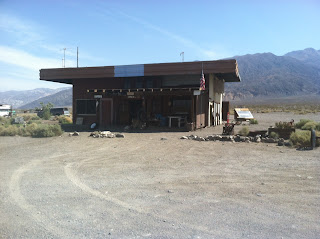 Next stop, Ballarat.
This is the Ballarat General Store 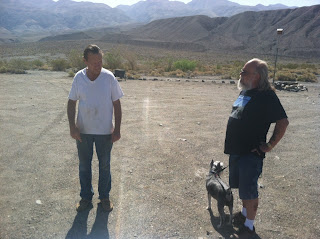 This is Rocky the caretaker and Grump 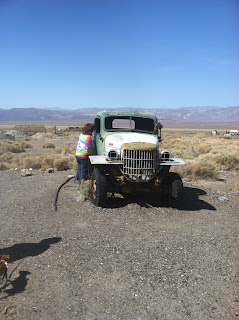 We gave Liz some private time with Bobby's Power Wagon 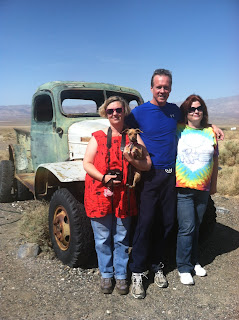 Patty, Matt & Liz in front of the Power Wagon 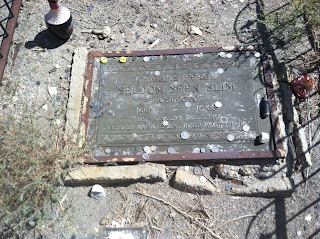 Close by is a cemetery for old miners.
Seen here is Seldom Seen Slim. 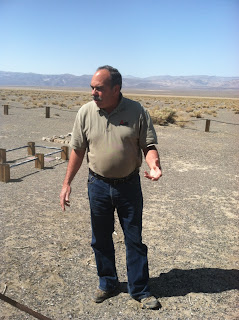 Shortly after after our arrival we were met by Sgt. Paul Dostie 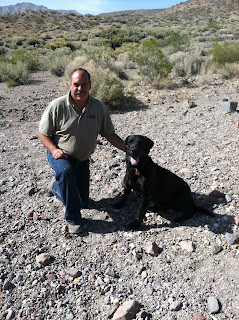 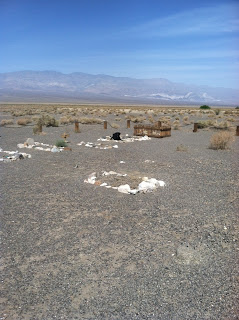 At the Ballarat cemetery Sgt Dostie demonstrated for us how Buster finds graves.
Buster chose the two spots that had the highest composition of "Volatile Organic Compounds" (VOC's) which are produced by human bone decomposition.

ON TO GOLER WASH 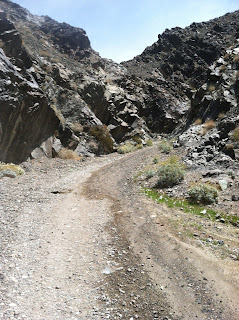 The mouth of Goler Wash 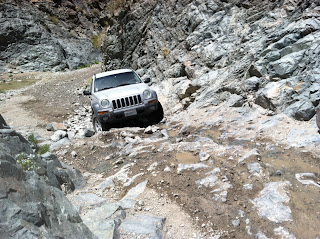 The only really difficult spot to pass is a spot called "the waterfall". It was mostly dry on this morning but it's no easy task to get even a four wheel drive over it. We had three! 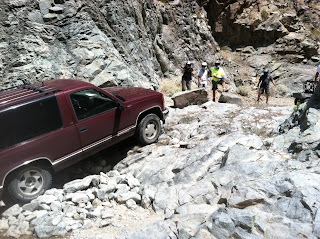 We helped get some dune buggies over the waterfall by moving around some rocks, etc. They then in turn helped us get the first of our three vehicles across. Funny story: Later on in the day these folks in the buggies arrived at Barker's and listened to the stories with great interest. Long story made short, we have some enthusiastic new readers! 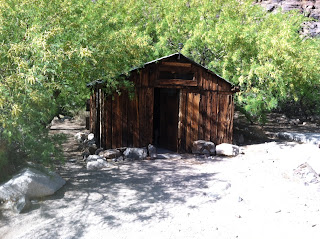 The Newman Cabin. Located about half way up Goler.
It was frequently used by the Family.

A few shots of our inspection of the main house: 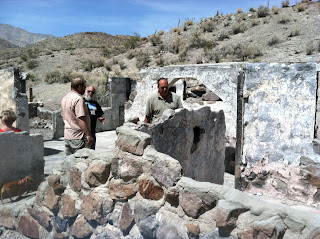 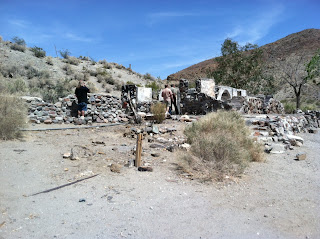 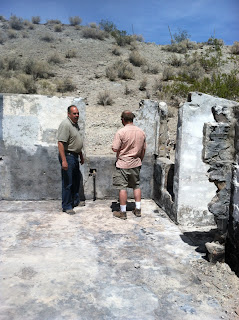 Sgt Dostie, Buster and others have identified five possible VOC "alert sites" around Barker Ranch. They are referred to as: Buster 1, Buster 3, Buster 4 and Ness 1. 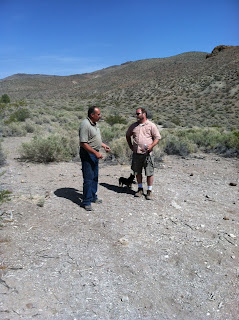 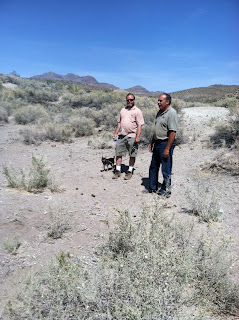 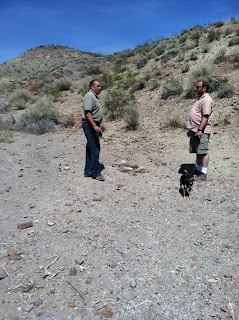 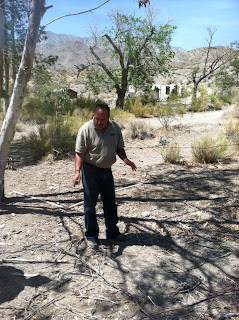 Sgt Dostie explains VOC site "Buster 4". It is located close to the front porch of the ranch. This one is particularly strong. It is speculated that it contains two young men killed with swords by two male family members. This may be why Robert Hendrickson said he could smell death while at the front door!

A bit of explanation is in order. Excavations on Barker's Ranch have come up "empty" by the authorities. The problem is this:

Desert flash floods are caused by rainfall having nowhere to go after being deposited. Most people think of the desert as being sandy and very absorbent; which it largely is. However, when water is deposited in desert elevation, it wants to take the path of least resistance to a low point and often that path is not soil percolation. The surface water accumulates in low volume streams that act as tributaries to larger creeks which act as tributaries to washes which funnel all of the water. This water evacuates from the higher elevation at a great volume and velocity and picks up sand, rocks, boulders, vehicles, houses, busses, helter skelter trucks, trees, brush, old wash deposits in its path; as much as the water volume can sustain. This water is ejected out of the wash and the deposits fall out of the water as the water velocity slows; depositing the heavier objects, first. Washes can be large enough to build homes in or small enough to walk across in a few footsteps. As the water continues its journey, the deposits left behind create alluvial fans. These fans shift and move with each incident of water evacuation and the subsequent debris left behind.

The point is, that the 3- 3 1/2 feet that was excavated only reached down to where the topsoil was in 1969! Charlie learned early on in prison that cops will only dig 6 feet. He has admitted in recorded telephone conversations that the Family buried these people at least 8 feet to avoid detection by police digs. With the alluvial deposits described above, law enforcement would have needed to dig 11 feet to find these remains. They stopped at less than 4 feet! 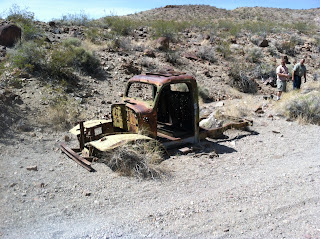 The "Helter Skelter Truck" located in a gully behind Barker Ranch.
It is also a Dodge Power Wagon. 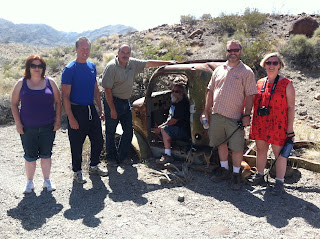 The group with the Helter Skelter Truck 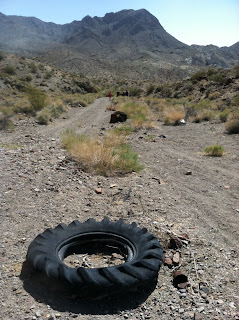 Curiously, somebody moved the Helter Skelter Truck. It used to be in a mostly buried state here, where you see the tire.  Someone (fairly recently) dragged it down to where you see it farther down the hill.

Myers ranch is is nicely maintained. The pool looks usable and irrigation hoses feed young trees and shrubs around the house that will eventually become great shade. 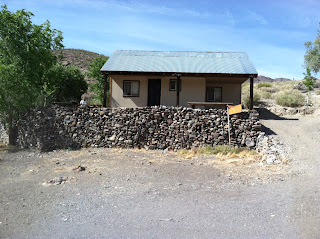 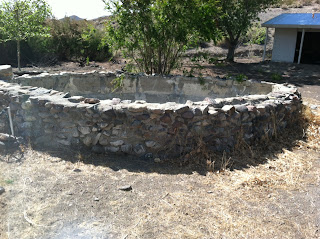 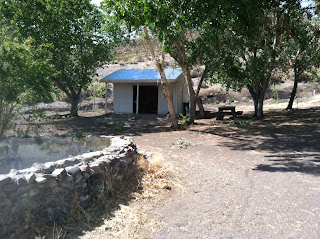 The Myers Ranch pool and a side building

Wow!! Did you post lookouts? Did you dance naked in the moonlight? Did you do one of Clem's fire rituals? Did you burn any earth moving machines?

It looks to me that the command center could be made operational again if blackie starts the battle of helter skelter back up.

I'm sure these sites have long since been picked clean of relics, but I am compelled to ask... Find any relics?

Day three was very interesting. Thanks to all of you.

Had you arranged to meet Sgt. Dostie, did he stop you because he thought you were up to no good, or whut?

Hey, whut! Buster could smell us coming all the way from Mammoth Lakes!

The Barker Ranch pics were heart breaking. It looks like its all gone.

orwhut - The meet-up with Sgt Dostie was planned.

I hope someone lit a dube out there...

If you brought me- I would have,,,

It must have been so surreal to see these places up close in person...

how fun to do this stuff in a group...

Wow, very impressive. Yes, what's the deal with Paul Dostie? He justs hangs around over there or what?

Paul drove over 4 hours each way to meet us. We are very grateful. Furthermore, we are all convinced that further excavation should (and must) be done.

Good to see fresh pics of these places Eviliz and company. Thanks for putting them up!

So give Liz and Patty a shovel...

and get Liz out of that truck... no she can't sleep in there lol

Any photos of the Evil One without shades? I want to see if the curvacious beauty really has red spinning eyes.
and don't tell Mr. Patty I said so (he is big) but his wife is as damn cute as she is personable.
Matt's just plain tall.
Fabulous photos, muchos gracias.

Leary, you are so sweet. Patty was s bit nervous about showing her bodaciousness to the world, but as we said repeatedly on our trip, "It is what it is."

To second what Matt said, Patty also believes there are more bodies up there. Why Inyo County stopped the dig last time at only 3-4 feet deep is beyond her level of understanding.

ST: Patty and Liz gladly would have started shoveling away but alas, its illegal to do so in a National Park without a permit. Patty may be chunky, but she's strong as a freaking ox! Let her at it!

Charlie made so much of Devil's Hole, it's curious that I've never heard mention that he even knew about Devil's Race Track.

Any photos of the Evil One without shades?

How in the world did the Family get their bus through the Goler Wash if you need 4-wheel drive?

rfoster1 said...
How in the world did the Family get their bus through the Goler Wash if you need 4-wheel drive?

They brought it up from the Mengal Pass side. It was much more drive-able back then, but real hard now.

I'm new to this blog and to the Colonel's...but man, I want to hang with you all...xo

Welcome, Maria! Glad to have you. We are in LA now. Follow along!

I noticed that somewhere in the sequence of photos between Bobby's Power Wagon in Ballarat and the Helter Skelter truck in the gully near the Barker Ranch, Mrs. Patty seems to have lost her pants! LOL! Looks like a great trip. So sorry the Barker burned prior to your trip. I heard it was once very cool, with its hand-hewn beams and the old fireplace and stove still there. There was some noise about rebuilding---anybody heard anything?

Patty emerged from the bushes at Barker's to inform Sgt. Dostie that she'd been held up and had her pants stolen.

No really it was just freaking hot so she put bike shorts on under her traditional red muumuu.

does anyone know if the rocky in death valley is rocky todd, member of the fountain of the world and manson family friend? i know he was arrested with grogan for having a sawed off shotgun in death valley and he was with the family at barker, so he was familiar with the area.

Beauders, Rocky is the son of George Novak, ex caretaker or Ballarat who died last spring. Rocky and George lived in the trailer that was left in Ballarat by Arelene Barker; now it's just Rocky. Patty does not think he was ever connected with The Family, though he likely met them many times. She could be wrong...

I'm guessing that stoned-out lazy hippies didn't bury any bodies, in hardpan, in August, eight feet down. Or at all.

I'm betting Buster is sounding on Native American graves or the bodies of miscarried babies, which prolly were completely decayed forty years later.

Said Patty: "Buster could smell us coming all the way from Mammoth Lakes!"

You realize that comment is just CRYING for a nasty joke, right?

awesome pics. btw, what recorded phone conversation with Manson, saying he buried bodies 8 feet down? I haven't heard of this, got a previous link I've missed?