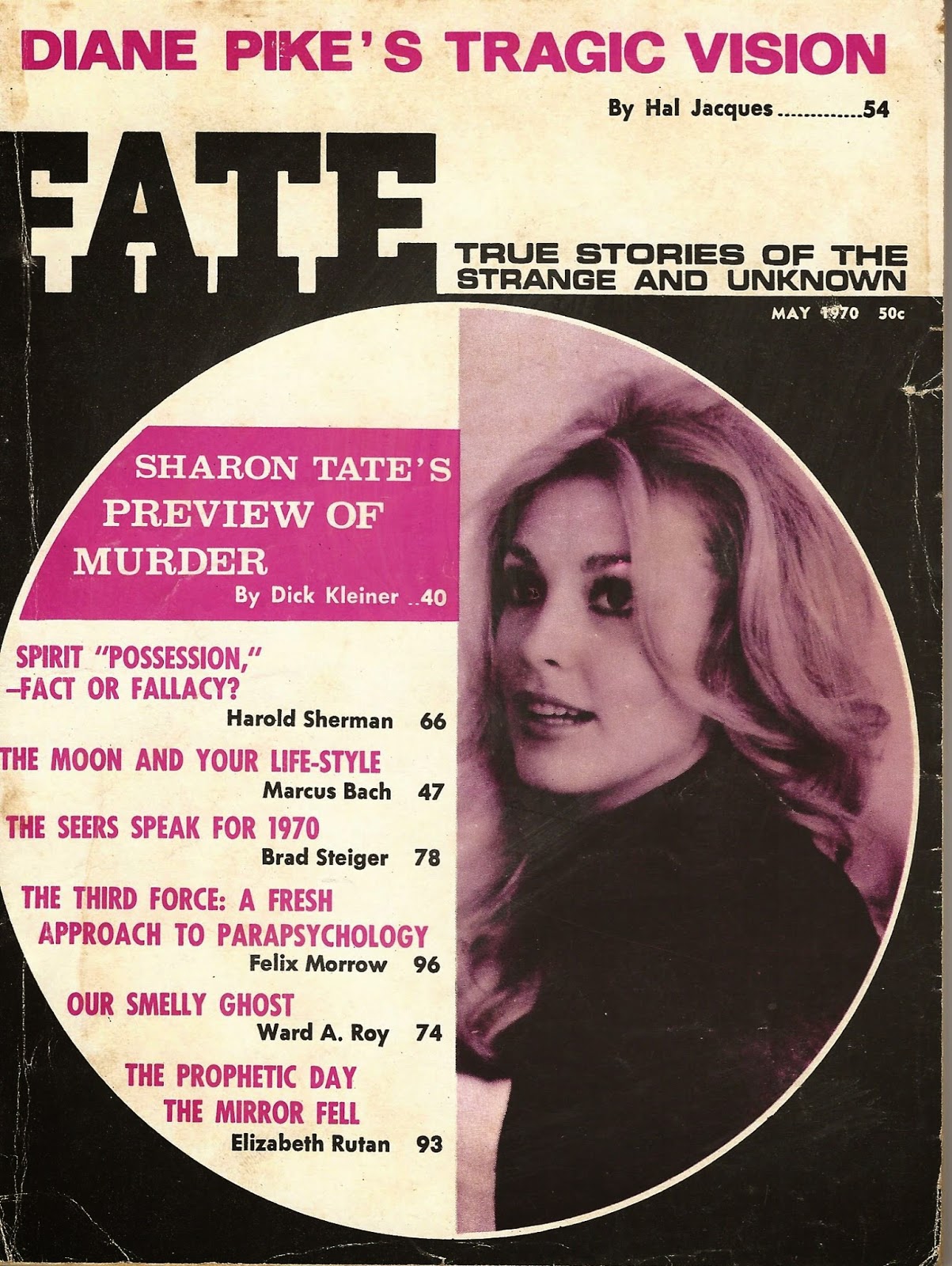 All of the images here appeared along with the article.

The meaning of a psychic experience Sharon Tate related to me some years ago seems obvious now-- but it didn't at the time.  The lovely starlet understood it not at all-- but today it is clear she foresaw the manner of her own death.

In my capacity as Hollywood correspondent for the Newspaper Enterprise Association, Inc., a news feature syndicate, I visited the set where Sharon Tate was working on a feature film on August 1, 1968.  I hade met Miss Tate once or twice so she recognized me.  Between scenes she invited me into her trailer. 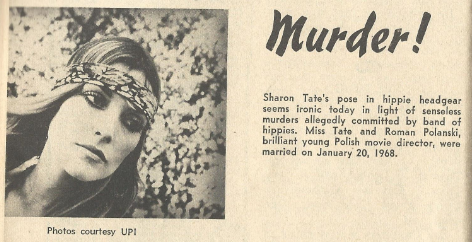 We talked for a half hour or so about her film career, her current movie and many other things.  Then I asked if she ever had psychic experiences.  It wasn't an idle question.  I always ask the stars and celebrities I interview if they have had such experiences at any time in their lives.

I had begun asking that question perhaps 15 years ago and I find a large number of actors and actresses recall such experiences.  They range from simple and commonplace- Deja vu and such- to fantastically dramatic stories.

So I posed my pet question to Sharon Tate, one of the most beautiful girls to become a Hollywood star in many years.

She answered unhesitatingly, "Yes, I have has a psychic experience- at least I guess that what it was- and it was a terribly frightening  and disturbing thing for me.  It happened a year or so ago.  Maybe you can explain it."

I said I wasn't too good an "explainer" but I would like to hear her story.  And this is what Sharon Tate related.  Remember, we talked a year before August 8, 1969- the date she, Jay Sebring and the others were brutally murdered.

At the time of her experience Sharon Tate was being squired around Hollywood by Jay Sebring.  A steady twosome, both exceptionally attractive, they made a striking couple.

Jay was a popular man-about-town.  His profession (he was a barber but in Hollywood they called him a "men's hair stylist") might seem a strange on to yield a "man-about-town" but Jay made a lot of money styling the hair of the famous and near-famous in Hollywood.  He had become reasonably wealthy and had purchased an expensive home in as exclusive part of the Los Angeles area.

His house was in Benedict Canyon which cuts north from Beverly Hills into the mountains.  The house had been owned years earlier by Paul Bern, an agent who became famous when he married one of his clients, a girl named Jean Harlow.

It was in a house at the end of Cielo Drive rented by Sharon and Roman Polanski, the brilliant young Polish director whom she married in 1968, the five murders took place.  But Sharon's psychic experience occurred in Jay Sebring's house. 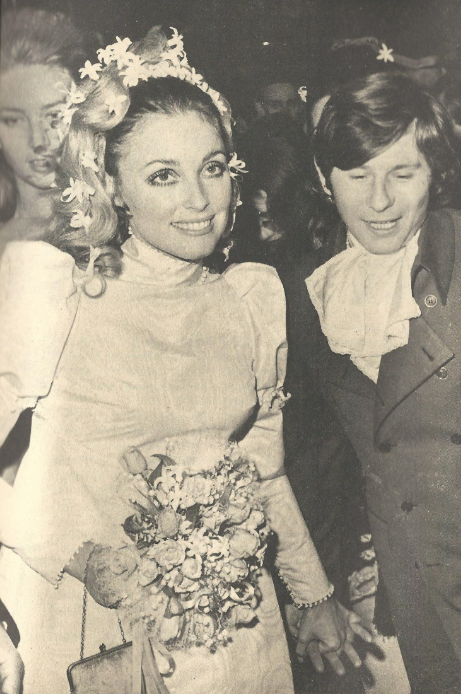 Jay had been called to New York on business.  A New York promoter was talking about franchising Jay Sebring Hairstyling Parlors and Sebring was there to talk about the deal.  At the time by sheer coincidence Sharon had no place to live.  She had given up her apartment in the expectation that another she had rented would be available but there had been a delay.  She couldn't get into the new place for a week or so.  She was planning to move into a hotel when Jay said she could stay at his house while he was in New York.

She happily agreed, for she was anxious to see the house anyway.  It was famous in Hollywood.  Everybody knew that here Bern had brought Jean Harlow when they first were married.  Everybody knew, too, that from here Jean had walked out on him.  And here too Bern had committed suicide.
***
Sharon moved a few things into Jay's house in the afternoon, cooked a little supper, read for a while, then went to bed early, tired from the moving.  But she couldn't sleep.

"I had a funny feeling," she told me.  There was nothing else, nothing external, all internal.  It was just a "funny feeling" that disturbed her and prevented sleep.  Every little noise- and what house doesn't have its little noises?- made her jump although she wasn't ordinarily skittish or excitable.

She turned on a bedside lamp, mainly to regain a sense of reality.  It didn't shed much light but enough for her to see something stirring outside her bedroom door.  "I saw this creepy little man," Sharon said, shuttering involuntarily.  "He looked like all the descriptions I had ever read of Paul Bern."

The vision, or whatever it was, made no threatening move in her direction.  The figure came into her room but did not approach Sharon's bed.  He simply prowled around the room, going rather fast for what she took to be a ghost, and bumping into things.  He- or it- didn't behave as she thought a ghost should- nor like a prowler.  He was moving too fast, he was clumsy, and he seemed to be almost solid, rather than transparent.

She didn't like what was going on.  She jumped out of bed and put a robe on and ran downstairs.  Shortly she wished she was back upstairs- for what she saw as she ran down the flight of stairs was enough to make anyone wish to be somewhere else.

"I saw something or someone tied to the staircase," she said.  "Whoever it was- and I couldn't tell if it was a man or a woman but knew somehow that it was either Jay Sebring or me- he or she was cut open at the throat."

She said she almost flew past this apparition and raced into the playroom, wanting a drink to steady herself.  She was sure that Jay had a bar somewhere in the room or at least a liquor cupboard.  But she had no way of knowing where it was.

Mysteriously something seemed to tell her- although she heard no voice- that she should open up one of the shelves behind the bookcase.  She groped around and found a tiny button.  When she pushed it the bookcase opened and behind was a hidden bar.  Quickly she poured a stiff one and gratefully swallowed the liquor.

She tried to clam down to assess her situation.  She told herself the whole thing must be just a horrible nightmare.  To test it she pinched herself- and was delighted to realize she had felt nothing.  It was only a dream.

Next the same soundless informer who had told her how to find the bar commanded her- irrationally it seemed- to tear away the wallpaper at the base of the bar.  This was ridiculous!  But her curiosity overwhelmed her.  She tore at the wallpaper and it came away easily.  Behind it was solid copper, a lovely base for the bar, which had been papered over by some boorish former owner.  She peeled away all the paper until the beautiful copper was completely revealed.

Again she reminded herself it must all be a dream. The incongruity, the apparition upstairs, the awful thing on the staircase and now the crazy business of ripping away the wallpaper to find solid copper- those are the ingredients of dreams.  She pinched herself again.  Still no feeling.

She thought she could go to bed now and sleep. she started back upstairs.  The thing, mutilated and gushing blood, still was tied to the newel post in the downstairs hall.  Upstairs the creepy little man still prowled about.  She skirted the former and dodged the latter and made it safely into the bedroom.  Surprisingly, once in bed, she immediately fell into a deep and untroubled sleep.

She awakened, late the next morning, to the sound of a male voice from below. 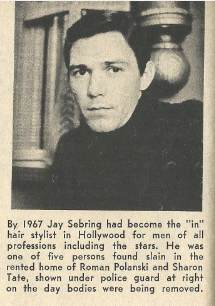 "Hey, Sharon, are you home!"  She recognized Jay Sebring's voice.  When she went downstairs, he explained the business trip had been cut short and he was home again.

As he talked she remembered the nightmare and laughed.  He wondered what she was laughing about but she couldn't tell him.  It would have been foolish to describe the two apparitions and the crazy business with the bar.

Then they walked together into the playroom and suddenly it all became reality again.  There was the bookcase open and the copper base shining and the scraps of wallpaper on the floor.
***
Sharon Tate, talking about this in the trailer on the movie set, laughed again.  It was the only psychic experience she ever had in her life.  Was it a dream?  Or were there ghosts?  She asked me what I thought.

I didn't know what to tell her.  Perhaps the "creepy little man" was a ghost, the troubled spirit of Paul Bern.  Perhaps the business about the bookcase and the wallpaper was feminine intuition or an ordinary hunch.  But the apparition tied to the staircase- that horrifying figure she felt was either Jay or herself- that I couldn't explain at that time.  Now it seems obvious. What could it have been but a preview of the horrifying drama to come? 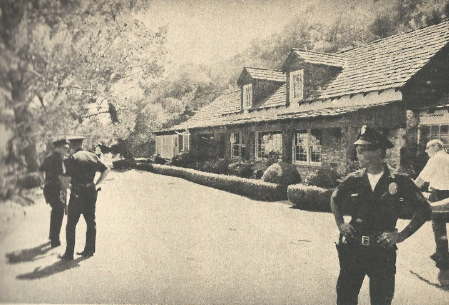