Shorty's guns are for sale!  There is a listing for them at site that specializes in selling firearms.  The seller is asking $75,000.00 for them and associated memorabilia. 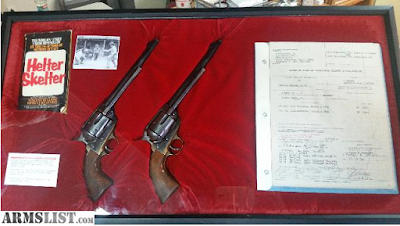 Skepticism abounds when items related to the Manson case are offered for sale.  With an enormous amount of help from CieloDrive I believe that between the two of us we have authenticated the revolvers and along the way discovered a thing or two that we didn't know.


Cielodrive.com has a section on Shorty with background information and the early days of the investigation into his murder.  The guns are discussed in the links to the reports.

The revolvers enter into the picture because they were evidence that members and associates of the Manson Family had something to do with the disappearance of Donald Jerome "Shorty" Shea.  Danny De Carlo told investigators that he was given two pawn tickets that were taken from Shorty's body by Bruce Davis.  These two pawn tickets turned out to be for the revolvers.  De Carlo redeemed the tickets and took possession of the guns.  De Carlo allegedly gave one of the one of the revolvers to Charles Manson.  Two weeks later De Carlo learned that Shorty had been murdered where upon Charlie returned the revolver that De Carlo had given him and De Carlo using the alias of Richard A. Smith went to a different pawn shop and sold the revolvers.

The "pearl handles" description does not seem to be true, the guns have walnut handles and there is no evidence that Shorty owned any other pair of revolvers.

Another official report is the trial testimony of Arch Hall Sr. who sold the guns to Shorty.  And thirdly, there are the pawn tickets from Shorty pawning the guns.  Shorty had pawned the guns a few times when he was low on money.  These tickets are from when they were pawned in February 1969 and the serial numbers are noted. 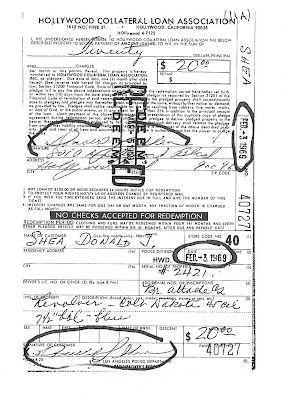 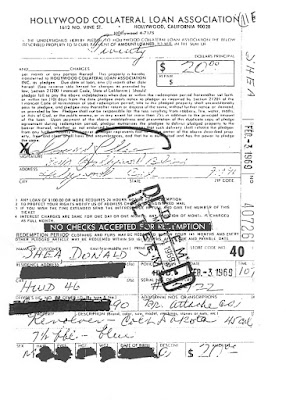 A little about how Shorty came to have the revolvers.  The revolvers were purchased new by a man named Arch Hall Sr..  Arch Hall was involved in the movie business, first as a stuntman with occasional small roles in films starting in the 1930s.  He eventually started his own film company, Fairway International Films, in the late 50s which was solely to promote his son Archie Hall Jr. as an actor and singer.  He had visions of his son becoming the next Elvis Presley.  He completed about 11 films which were later pronounced as being the worst films ever made.

Hall made Shorty's acquaintance when he shot portions of a movie titled What's Up Front early in 1963 at Spahn Ranch.  Shorty and his second wife, Sandra, were living at Spahn with their three children at the time.  Shorty kept in touch with Hall after the filming and hit him up for any possible film roles quite regularly.

The revolvers were acquired by Hall for use in the filming of Deadwood 76.  Hall stated that Shorty fell in love with the guns during the shooting of the movie and pestered Hall to sell him the guns which he eventually did in 1968.

They are-- Italian made copies of Frontier model Colt's with long barrels, and they are made in Milano.

I had them made special for quick-draw.  ...you file the triggers-- I'm not technically qualified to say, but it is so that you can fan the gun, shoot much faster with it.

Q  By Mr. Denny-  Were the guns safe to fire real bullets?

A I'd hesitate to shoot them.  They are made in Italy to match a Colt and we never shot a real bullet in it.  We shot reloads-- you know, blanks-- and I think they said they were alright, but because it was sort of a Mickey Mouse Colt, in a sense, we never used it for real bullets.

So, the revolvers were not manufactured by Colt, they were less expensive Italian knock-offs that had been modified and Hall wouldn't have used live bullets in the guns.  Most of the official report do refer to the guns as Colt's as does the current seller.

The Seller provided both Cielodrive and myself with pictures of the serial numbers and a close up of the papers that are being sold with the guns. 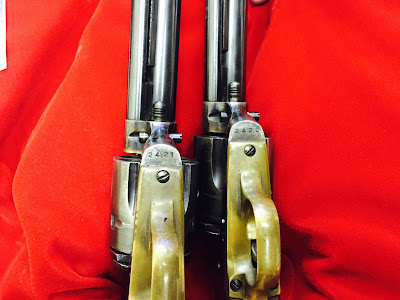 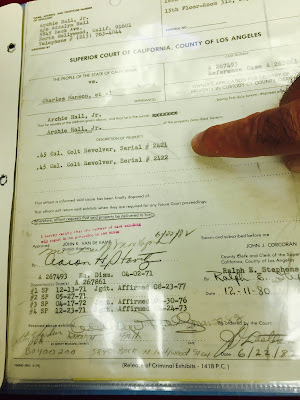 Arch Hall Sr. died in 1978, it was his son who applied to the Superior Court of Los Angeles County to have the revolvers returned.  Cielodrive told me that these are the only guns associated with the Family that are known to have been returned to their owner.

While Shorty did give Arch Hall something down for the purchase of the revolvers, about $25, two used cameras and some second party postal money orders, which bounced, as collateral.  He did not finish paying off the guns nor make good on the money orders.  As a matter of fact once Shorty had the guns in his possession he did not give Hall any more payments, only called with excuses from time to time.  Hall had the receipts for the original purchase of the guns so that made the guns his.

While reading the information at Cielodrive it occurred to be that Shorty wasn't as tall as I once thought.  I have always thought that Shorty was 6'5" and the reason he was called Shorty was because he was so tall.  Not so apparently, Kitty Lutesinger puts shorty at 5'10", Shorty's wife Magdalene says he is 5'10", information in one of the reports that looks like it's from Shorty's drivers license says he is 5'11".  Shorty's autopsy report says the remains were 5'10''.  Another myth shattered!

Here is the movie Deadwood 76, see if you can find Shorty!  Cielodrive and I could not.  Shorty is suppose to be riding a horse in several scenes of the film and he was one of Sam Bass's "boys" involved in a gun fight towards the end and he gets shot, to the best of Arch Hall's recollection in the trial testimony.