The nut don't fall far from the tree 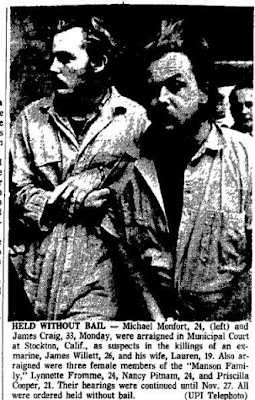 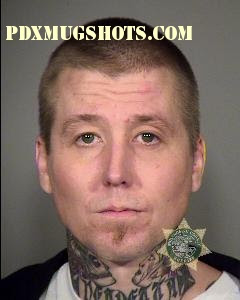 Bend police also revealed Saturday that a second suspect, Eric Ian Monfort, 32, had been arrested Wednesday in Portland. A third, unidentified participant in Tuesday’s holdup at the Holiday Motel remains at large.

I personally think if he invested in a few "turtle neck" sweaters, he might of been on the lam longer. And maybe he should of called Momma for "hiding out tips."

On 12/2 Nancy Pitman a.k.a "Brenda McCann" and Bruce Davis surrendered. Davis was charged in the Hinman and Shea murders and Brenda was wanted on a forgery charge. Both had lived for months down in some huge drainpipes of the L.A. flood control systems in Canoga Park. 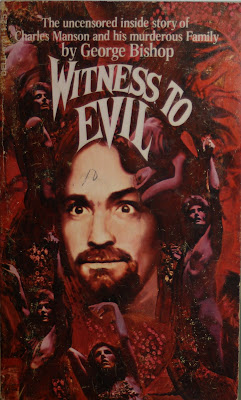 Here are a few fun illustrations by Bill Lignante from Patty's copy of Witness to Evil (above). She loves that there is a "10" on his head instead of a swastika, as in 10 cents. Patty paid a bit more for it than that; it's obviously been around the block. According to the acknowledgements,"Illustrations broadcast by ABC news on ABC Evening News with Howard K. Smith and Harry Reasoner." 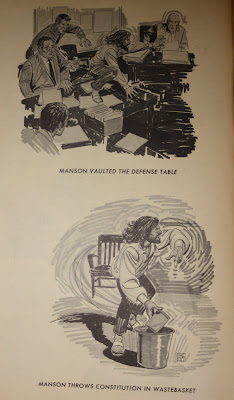 "Ah, so! Strong, shalp, instrument-u!" Everyone else gets full sentences but it's 1971 and Noguchi ain't white and this is a Pulp Novel: 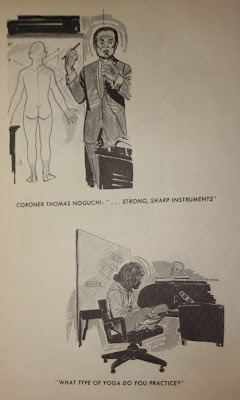 "That Oral Whatchamacallit!" The joke never gets old. Apparently though, Bugliosi did it to impress on the female members of the jury that Charlie had the power to make the girls do utterly repulsive things (snicker), and not necessarily to embarass Babs: 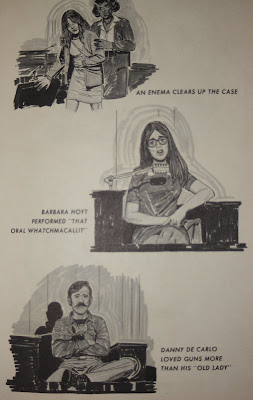 Does anyone know what the enema is about? Below: Patty does not think this looks anything like Sharon Tate: 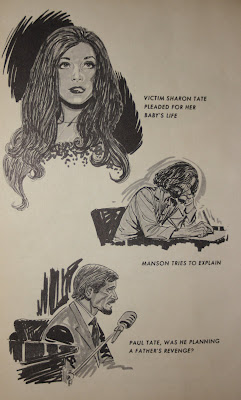 What Charles Manson Means to Me

My Manson phases have the quality of a binge — lots of late nights on message boards, bleary mornings spent lying to my friends about how much I'm actually consuming. It's because I'm embarrassed. Sad middle school girls have their Wiccan spells and Tarot cards; their furious, zitty male counterparts revere Charlie for obvious sex/power reasons. Thirty-year-old women should have better ways to direct their darkness.

This isn't a constant obsession, but one that likes to crop up when things are going wrong. A good barometer of my mental state is the books on my nightstand; as of this morning, they included Family member Tex Watson's Would You Die For Me?; The Long Prison Journey of Leslie Van Houton; Susan Atkins's Child of Satan, Child of God; and a couple Jonestown memoirs for a bit of variety. Which is to say that things are not so great for me right now.

Most of these ex-Manson books are be bad in pretty much the same way. Read enough of them (preferably late at night, preferably while consuming enormous amounts of popcorn) and the story starts to feel like a parable: the small man says something about living in the now. He tells you you're pretty, tells you you're stupid, tells you you're his favorite. He would prefer if you grew your hair long, stopped wearing shoes, strapped this buck knife to your belt. When he gives you a new name, you feel for the first time as if you belong. He opens his dark eyes wide. It is as though he never blinks.

When you're depressed, or fifteen, reading about Charlie is strangely soothing. Pigs and nooses and speed and Death Valley and the Beach Boys, freckle-faced Squeaky Fromme and “Look at Your Game, Girl” (which I find myself accidentally humming all the time) and Doris Day's son: it's real life melodrama that confirms some dark truth you've always suspected the universe was hiding.

But my problem is, the more I read, the more I wonder — you know, that old infinitely regressing Why. The memoirs are not much help in finding answers (Susan “Sexy Sadie” Atkins blames the drugs; born-again Watkins thinks Charlie is probably a demon). They're full of mundane episodes and then, suddenly, horrifying episodes. Atkins meets Charlie (“the skinny little man”) in a San Francisco crash pad right before her drug-dealing boyfriend gets picked up by the cops; a couple years later, she carves an X in her forehead during her murder trial as a sign of eternal devotion. Charles (“Tex”) Watkins is depressed — his get-rich-quick wig selling scheme is going nowhere — until the day he picks up a long-haired hitchhiker who happens to be Dennis Wilson from the Beach Boys. Wilson invites Watkins into his mansion, where Charlie is hanging out with some googly-eyed hippie girls. A year earlier, Watkins was a Texas frat boy; a year later, he stabs eight people to death. Lynette (“Squeaky”) Fromme was sitting on a bench looking sad when Charlie happens to wander by and ask what was wrong; in 1975, she puts on a red robe and aims a Colt 45 at the president in order to get Charlie's attention. Afterward, life continues: Atkins found Jesus and died of brain cancer in prison; Watkins fathered four kids during conjugal visits; Leslie Van Houton is friends with John Waters; Squeaky lives in upstate New York, I've heard; Sandy Good may or may not be a Nazi. The whole thing echoes in my head with the cadences of a fairy tale, the kind with dark woods and wolves, and where the moral of the story is that good girls should probably stay inside.

Or maybe the moral is that the world is full of improbable happenings. Some people are in prison and some people are dead and some people are staying up too late, reading books that scare them. That last one's me, but the cumulative effect of too many Manson memoirs is seeing yourself in all of it. At two in the morning I read Atkins's chapter about tripping on acid when she was seven months pregnant (she goes into labor the next day; there aren't any clean razor blades, so Charlie has one of the other girls bite the umbilical cord off), and find myself thinking, “That could've been me!” But, no, it couldn't have. Or could it? In a dark room, sometimes it's hard to tell.

All I know is that I'm not the only one trying to get closer and closer to a thing that actually horrifies me. That doesn't make it any healthier, as habits go. Consider the Amazon reviewer, who found Tex Watson's Will You Die For Me? unsatisfying: “He describes flashes of color & movement to describe the killings. Is that it?” Of course it is, and it is (as always) both too much and not enough.


Rachel Monroe lives in Baltimore, but is in the market for a commune somewhere warmer. You can follow her on tumblr here.