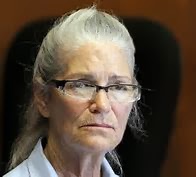 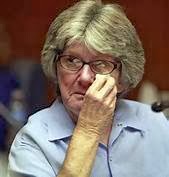 Over the last couple of years, or however long I have had the opportunity of writing for this wonderful blog, I have always been totally, 100% against any of the Hinman/Tate/LaBianca/Shea murderers getting released. I have always thought "lock them up, and throw away the key" until I read something that made me question my previous judgement. By the way, Tex Watson isn't included in my "compassion." I can't think of any solid reason to ever release that person incubus onto society.

Anyway, what I am talking about is a report that was done by the group "Legal Services for Prisoners with Children." The report is called "Dignity Denied: The Price of Imprisoning Older Women in California." Now, I know this report is about older WOMEN in California prisons, but I think a lot of the same factors could be applied to geriatric men as well, Charles Manson included. Guess who was a contributor to this report, amongst others? Leslie Van Houten, and Betty Broderick (of A Woman Scored: The Betty Broderick Story fame). Since this report was done in 2005, I was a little surprised that Susan Atkins, and Patricia Krenwinkel didn't give any input, since, technically they are/were in the same boat. This report is a bit long, so whenever you have time, please read it, and let us know what you think. Compassionate release, or lock them up, and throw away the key? Other alternatives would be a nursing home-type facility, or home confinement. I guess I am one of those that thinks maybe a nursing-home type situation is better. Maybe not 100% freedom, but confinement in a safer, more humane environment. I know these women, especially PK and LVH did a terrible, horrible thing, but they are still elderly human beings. Here is the link: