Patty'll show you hers if you'll show her yours! 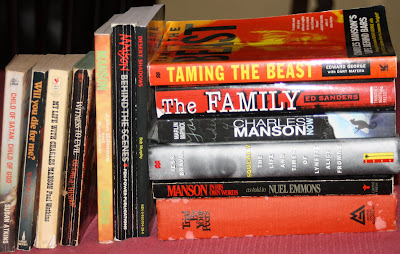 All this talk in the Heidi Ley article about there being 160 books on Manson "and most of them bad" got Patty to thinking. What's in Patty's collection? See for yourself. Apparently she only has about 8% of the available titles:

Taming the Beast, Edward George with Dary Matera: Charlie's old prison counselor tells tales of Charlie's life behind bars up until the early 1990s.
The Family, Ed Sanders: A classic but disliked by purists because the author puts quite the spin on the facts. Patty digs it, though.
Charles Manson Now, Marlin Marynick: A psychiatric nurse from Canada who developed a long distance personal relationship with Charlie in the late 2000's tells all.
Squeaky: The Life and Times of Lynette Alice Fromme, Jess Bravin: THE SQUEAKY BIBLE until she releases her own damn book. JESS IS PATTY'S IDOL. Can anyone get her his email address? Please?
Manson In His Own Words, Nuel Emmons: A great read but also disliked by purists because Emmons edits Charlie's words for "improved coherence."
Trial By Your Peers, by one of the original TLB jurors: Grump sent this one to Patty. It's rare, it's interesting, but IT'S BAD. Grump warned Patty and he was right. Still worth a book report though, so watch for it. Thank you, Grumpy Poo.
Child of Satan, Child of God, Susan Atkins: Great details about her early days in San Francisco.
Will You Die for Me?, Charles Watson: More great details about his time in the desert before fleeing to Texas.
My Life with Charles Manson, ("Little") Paul Watkins: An engrossing read: someone (Patty forgets who) has the kindle version and it's also on line at The Colonel's pad.
Witness to Evil, George Bishop: An early cheap paperback about the trial. Patty has not read it yet but the illustrations are hilarious and definitely worth their own post. Watch for that too.
Manson, John Gilmour: Patty can't remember what she likes about this one, but it was pretty good.
Manson: Behind the Scenes, Bill Nelson: Hilarious! Some good material with some laughably awful fiction intertwined. Patty loves her some Bill Nelson. Except for that child molesting business, of course.
Desert Shadows, Bob Murphy: The Patty's constant companion on their semiannual explorations of Death Valley National Park. Patty is told it's expensive on line, but rumor has it you can get one pretty cheap in Death Valley itself.

Patty also read Mr. Hendrickson's latest, but it is now in the posession of The Evil One. Given her current paltry collection, what should she buy next? She needs some Gorightly and Schreck: these are obviously missing. What else?