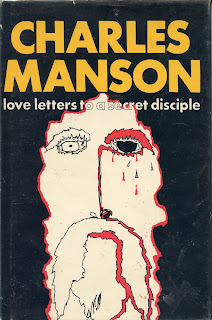 This is an expensive out of print book. The contents are way out of proportion to the price which ranges from $95 to $250. The cover is a striking color rendition of a Manson drawing from the trial. It goes downhill from there. Perhaps the subtitle "a psychoanalytical search" is the tipoff that pages of turgid, highly speculative drivel is going to follow. This guy is an English professor? What, English as a second language?

The authors name is Saul Rosenthal and he was an assistant professor of English at Indiana State in Terre Haute during the 70's. He used the pseudonym Sy Wizinski 1.  It seems that he's alive as I cannot find an obituary and his web trace is very slight. He has two horrible poems in the Indiana English Journal 2 : "Lost in the fantasy of permanence, Oblivious to the dominions of decay, How can they know the daily grace of miracles"... yeah. Okay. All right. Furthermore, online I found an inscribed copy reading "from Saul Rosenthal" so I feel secure in identifying the true name of the author. 3

Rosenthal knew a woman who started corresponding with Manson in 1969 at age 13. In 1975 after Ms. Fromme attempted to assassinate President Ford; the FBI showed up and grabbed all the letters as "evidence". The woman he calls Beatrice managed to keep some back and this book reprints their transcripts. There's nothing really spectacular here; the usual cryptic Manson missives about God, love and saving the planet. One hard piece of information is that Manson asks "Beatrice" to write his friends Steve Grogan, Larry Jones and Bob Beausoleil in December of 74. Furthermore from a letter of March 75, Manson gives each of the Family a name as an occult flash point.

Ironically, the items he used to pad the book are now its main value. He includes an interview from the LA Free Press with a sympathetic writer just before the trial that details Manson's confinement. 6 Next is an unrevealing telephone interview with another underground LA magazine "Tuesday's Child". 7 This resulted in Manson getting his phone privileges revoked.

What really should be revoked is the long, confusing opening essay to Manson's off reprinted final court statement. Good lord! Wizinsky starts by quoting the English Catholic cardinal and theologian John Henry Newman (1811-1890) and meanders onto Sacco & Vanzetti, James Thurber (?), climaxing with a panegyric about Ralph Nader!  Wizinsky should be on trial for his wandering metaphors and touchstones that attempt to bring the Manson case (and Wizinsky's "spectacular" insights) towards the status of universal myth. John Henry Newman's autobiography can be compared to Manson's soliloquy? Really?

Historically, the most important letter is printed next. It's an unsigned "Pro-Family" letter from the LA Press which served as an introduction to Manson's famous letter to Leary. 8

"Brothers and sisters", it reads, explaining that Manson's words have been shut out of the media dialogue even amongst the "underground" press. The letter goes on about the "machine" of society: the media industrial prison complex. 9 It links up Manson to the wave of activism then flourishing in "San Quentin, Soledad, LA County Jail and Sybil Brand".  What's interesting is the context of comparing The Family to other autonomous anti-establishment tribes such as the Weathermen, Mel Lyman's Fort Hill Community and the Black Panthers. 10 Of course Manson's letter to Leary was prompted by Leary's Weathermen assisted prison breakout and the subsequent "kill a robot policeman" statement. Whether you see any affinity between the forces of the militant left and The Family you can be sure that the authorities did. This was emphasized in the security for the trial and the prisoner transfers.11

Finally, he reprints a sad interview with Manson's mother just before the verdict. She mentions wishing that Manson got some psychiatric help. It's really poignant actually. 12

The author ends with an "open letter to Charles Manson" that is just off the charts in terms of bizarro-land commentary. His use of fifty cent words and convoluted thinking show not only his ego but his lack of understanding of the subject. How Manson could understand this tortured logic peppered with polysyllables and far-fetched literary references is inconceivable. Between the fully orgasmic prose and the copyright issues; it's no surprise this book was never reprinted.

Luckily, Lynette Fromme gets the last word in via a photocopied letter: "we live in a very magic world…everyone does…but not everyone knows it!"