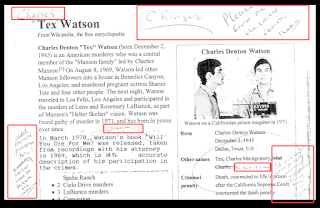 Everyone hates being burned online, even convicted murderers. So when someone who appears to be former Manson Family member Tex Watson decided that his Wikipedia page wasn’t giving him a fair shake, he did what any currently incarcerated felon would do: Print out the page, physically mark every point of contention, and mail it in to Wikipedia.

Discovered by The Wikipedian, a new section was added to the article’s discussion page this past Thursday under the heading “Edit requests.” In the addition, a member of Wikipedia’s Volunteer Response Team, tasked with answering the sites’s emails, explains, “The requested changes were presented as a printout of the 16 February 2016 version of this Wikipedia article, annotated with handwritten notes by the subject of the article. A copyright release was sent with the notes. The scan of the notes is uploaded to Commons.” According to Wikipedia’s editors, the scan was from none other than the former Manson devotee himself.

For a man who helped brutally murder at least seven people, including then-pregnant actress Sharon Tate, Watson’s purported edit requests are surprisingly banal. Some of his suggestions are syntactical, while others point out basic errors of fact—like this one noting that he actually attended Cal State, not the University of California:

The editor also attempts to clear Watson of at least some degree of culpability in the Manson Family murders. Here, for instance, Watson seems to assert that he merely assisted co-Manson Family member Patricia Krenwinkel in killing Folger.

Apparently, Tex was much happier with the previous version of the post, which not only included the murderer’s real first name (Charles) but also plugged his autobiography.

As William Beutler of The Wikipedian points out, “It does seem that Watson has done at least a bit of research into how Wikipedia works: he understands there should be citations, and knows he can lobby for the removal of uncited material—although it seems more likely someone will just find a news story about the signature drive than remove this detail.”

At the time of publication, Watson’s alleged edits have yet to be made. Wikipedia’s editors are, however, still in the process of discussing the submission, so that might very well change. Of course, there’s no way to be certain from scans alone that Tex is who he says he is. The ticket for the request was made private by Wikipedia, and without the envelope allegedly sent from prison, it’s hard to verify without speaking directly to Watson. We’ve reached out to Wikipedia for comment and will update if and when we hear back.

You can read the scanned edits in full below. 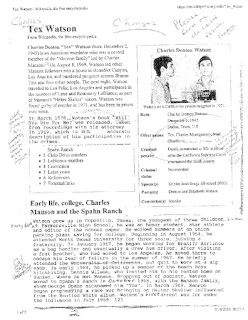