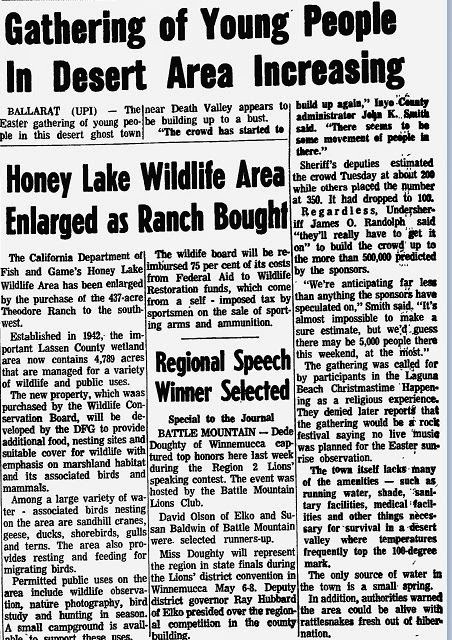 From the Nevada State Journal, April 8 1971:  "the gathering was called for by participants in the Laguna Beach Christmastime Happening as a religious experience. They denied later reports that the gathering would be a rock festival saying no live music was planned for the Easter sunrise observation."

*Special thanks to Michael Channels for permission to use the image at left.

Here are two more from the same event that DebS recently found in the LA Freep. One has a map showing festival attendees how to arrive at Ballarat from Laguna Beach:

"According to Superintendent Murphy of Death Valley National Monument, no arrangements have been made with his department for the festival...As we see it, this festival has all the makings of a very bad trip."

Promoters jumped on board and rumors floated that bands like Jethro Tull would be in attendance. BEL member Dion Wright who painted the Taxonomic Mandala made the following statement: "An Easter gathering will take place in Ballarat California, an eighty acre privately owned ghost town...(that) has been offered free of charge. We have represented to (Inyo County) a pilgrimage...including the placing of a Book of Life in the Panamint Valley."

Book of Life, not Book of Death (as in Leary's and the Manson's manifestos). Patty has heard the Goler Wash referred to as the "Holy Goler" and has always wondered why: perhaps this is part of the answer. Interesting, no?