Looking For The Back Ranch House And The Outlaw Shacks

Any visitor to the site of Spahn's Movie Ranch today can easily see where the old western movie set was located on the flat area south of Old Santa Susana Pass Road across the street from the Church at Rocky Peak. Less apparent, however, is the location of the old Back Ranch House and the Outlaw Shacks, both of which also played significant roles in the saga of Charles Manson, his "Family," and the murders of the summer of 1969. These two places were situated in close proximity to each other west of the main ranch area and were accessible by a dirt road that was known as "Lovers Lane." 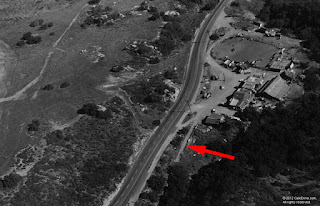 Aerial photograph of Spahn's Ranch. Lovers Lane is indicated by the arrow. 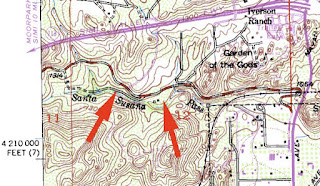 In his book My Life With Charles Manson Paul Watkins described the Back Ranch House thusly: "Like the rest of the buildings at Spahn's, the ranch house was in a general state of disrepair. But it was warm, rustic, and smelled of wood, generating the feelings of a mountain cabin. It had a huge living room with a fireplace and plenty of windows facing the road. Two good-sized bedrooms in the back fronted on the creek, and beyond it, a sloping forest of scrub oak, eucalyptus, and poison oak. The girls went to work at once, scouring floors, cleaning cabinets, and washing windows. We moved the mattresses, furniture, and food supplies in from the saloon, and afterward decorated the walls and the ceiling of the living room with Moroccan tapestries. It felt good to be out of the dusty confines of the saloon into a more bucolic, picturesque setting away from all the tourists."  (MLWCM, pages 76-77)

In Will You Die For Me? Charles "Tex" Watson recalled the Back Ranch House as the site of "the Family's" fear exercises:  "Sometimes Charlie would gather us all together in the ranch house and imagine a rich piggie [sic] sitting in the middle of a circle we'd form. "Imagine we just yanked this pig out of his big car and stuck him here," Charlie would instruct us. Then we would project all our own fear on that piggie while we fantasized his own fear as he was surrounded by our silent staring power." (WYDFM?, page 116)

The Back Ranch House was also the site of the infamous "freak-out" acid trip which occurred soon before the group initially went to the Death Valley area at the end of October, 1968 (See MLWCM, pages 105-112). 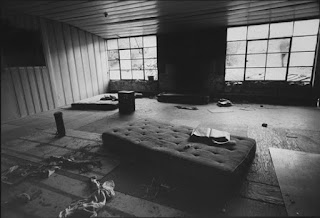 Judging from this interior shot of the Back Ranch House from the December 19, 1969 issue of Life magazine, the cement slab base for the structure must have been pretty big.

The Outlaw Shacks, located near the Back Ranch House, also figured importantly in the saga of Charles Manson and the murders which surrounded him, for they were the site of the infamous bust of Manson and Stephanie Schram on August 22, 1969. That bust, set up by Frank Retz and Donald "Shorty" Shea, was the final straw in the escalating conflict between "the Family" and the people that wanted them off the ranch property -- a straw that led to the stabbing death of Shea a few days later. 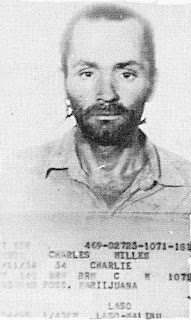 Charles Manson's mug shot from his arrest in the Outlaw Shacks on August 22, 1969

So, the Back Ranch House and the Outlaw Shacks were both important locales in the story of that crazy summer of 1969. But where exactly were they? In September of this year I went to the ranch site with the area's unofficial caretaker to see if we could find out.

It's been forty-five years since the ranch burned down, and that's a lot of time for changes to have occurred to the landscape. But if anything survived of the Back Ranch House it would be the cement slab that the house, like many other California structures, was built on. Also, there could be some remains of the stone work around the house's fireplace. So what we would be looking for would be the remains of a cement slab which, based on a 1969 photograph of the interior of the house, would be fairly large. As for the Outlaw Shacks, period photographs show them to be made out of wood, so likely all traces of them would be long gone. But one picture showed the horizons of the mountains behind the shacks, and we knew that if we could line up those horizons in the same way today we would be in the same spot as the photographer who took the period photograph.

It was a hot September day when we went out there. Starting on the west end of the movie set site we walked further west along the north side of the creek bed running in the gully behind the former western set. As guide material we had several old photographs of the Outlaw Shacks and Charles "Tex" Watson's map of the ranch area from his book Will You Die For Me?

Below, the Outlaw Shacks 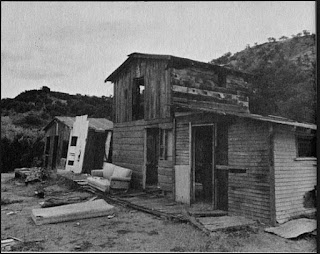 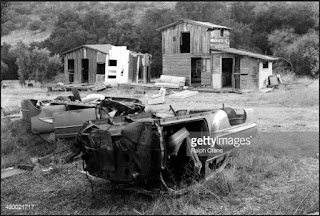 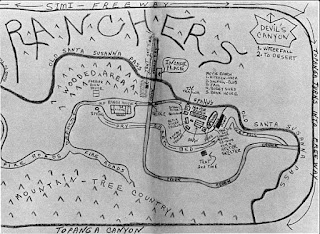 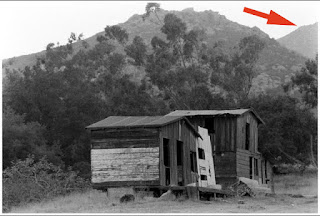 This photo shows the lineup of the horizons. The arrow points to a noticeable feature of the far mountain range. If you found an identical lineup today you would be standing in the same spot as the photographer who took the picture. Note the distinct formation of rocks on top of the mountain in the center. 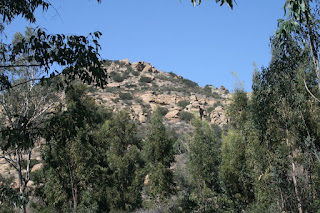 The same mountain today, approached from the east

It was a longer walk than we thought, almost a half a mile.  As we proceeded west, the mountain in one of the photos of the Outlaw Shacks quickly came into view. It took a while to get oriented to the topography, and we did quite a bit of fruitless wandering up and down the hills before we got a sense of what we should be looking for. But finally we realized that the point we wanted was located close to the north side of a developed area about a half-mile west of the western set site and fairly close to Old Santa Susana Pass Road. We were just walking to that area to get the horizons of the mountains lined up when the guy drove up in the red pickup truck. My "Free Manson" T-shirt-clad fellow researcher disappeared into the brush, but he kept taking pictures. 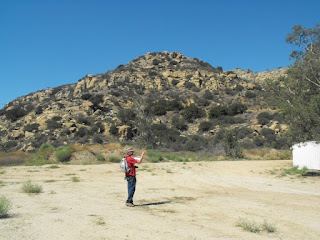 Me pointing to the direction we would have to go to get the correct lineup of horizons. I'm already trespassing on private property.

"What are you doing here?" the man in the truck asked.

"Oh, hi. We're just trying to find the location of some old shacks," I told him.

"You know that this is private property?"

(Me, ignoring his question) "Oh, well we're just trying to line up these mountain horizons to find out where this location is. See, if you line up the mountains, then you're in the place. It should be just over there (gesturing north) someplace." (Presenting the 1969 photograph) "See, here's the same mountain with the same rocks on top."

When the guy saw the old pictures he suddenly became interested.

"Where did you get those pictures?"

He saw my point about the mountain horizons and ventured that the reason they weren't lining up as in the 1969 photograph was because the far mountain's horizon had been altered during the construction of the Simi Valley Freeway in the late '60s and early '70s. I thought that such a geographical alteration was beyond even Caltrans' biggest earth-raping wet dream but I kept my disagreement to myself as the fellow was being fairly friendly and didn't seem inclined to call the cops. But neither did he seem inclined to let me venture further north to see if I could see the proper mountain alignment. 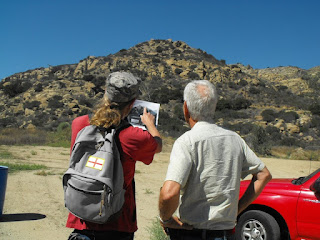 I explain to the nice man that we're only trying to find the location of some old shacks.

After a few more minutes of conversation (including my heartfelt dissertation on my respect for private property rights) my research partner and I excused ourselves and retreated from the verboten territory.

As we walked back to our cars on Iverson Road, the mountains finally started to line up. The far range revealed itself from behind the near one, and it became apparent where the location of the Back Ranch House and Outlaw Shacks was, namely on the developed piece of private property owned by the Church at Rocky Peak. 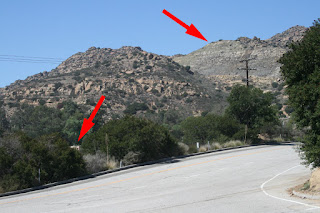 Photo taken from Iverson Road shows the same rear mountain horizon that is noted in the 1969 photo above. The top arrow points to the same feature in the far mountain range. In order to line up the horizons precisely one would have to be standing about in the area indicated by the lower arrow. Fairly close to Old Santa Susana Pass Road, the location is now on private property.

Having found the location of the Back Ranch House and the Outlaw Shacks it was apparent that no trace of any of those structures would remain today. The shacks were wood and likely perished in the same wildfire that consumed the other buildings of Spahn's Ranch on September 26, 1970. A similar fate also probably befell the Back Ranch House, and any trace of a surviving slab it might have been built on has doubtlessly been obliterated by changes made on the property by the Church at Rocky Peak.

Thus, like so many locales related to this case -- the Spahn Movie Ranch proper, the Polanski residence, the house on Gresham Street, the Myers and Barker Ranches, to name a few -- the Back Ranch House and the Outlaw Shacks have passed on from the realm of reality and into the realm of legend and lore.

Google Maps satellite view of the ranch area today. The arrow on the right shows where the movie set was. The left arrow indicates the general location of the Back Ranch House and Outlaw Shacks -- now on developed private property.

The below documents were sent along by Ben Gurecki. For details check the comments.


"Here are the arrest documents that go with the arrest photo of cm. these are originals and clearly signed by Red, using Bruce's alias." 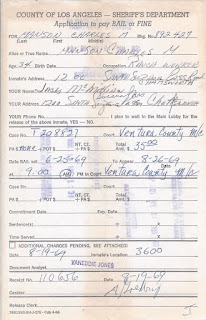 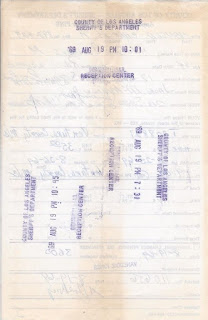