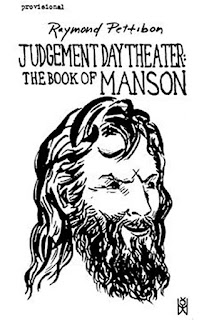 The Book Of Manson was released in 1989. The film is available to watch on Youtube but is broken into five sections. Part one is missing. I'd buy a copy if mine were the bank accounts of a university and not a dumb writer but life is what it is and I'll likely die without knowing what happens in part one.
"The loose plot and bad production make it difficult to watch but it's very rewarding if you can stay on the ride."
A reviewer named Ruiz wrote that about BoM seven years ago. You won't find many reviews online and Ruiz was succinct.
Book of Manson is mucho irreverent in spades. Filmmaker Raymond Pettibon has the comedic timing of Roman Polanski. More than once, the thought crossed my mind that I was watching a Polanski treatment of the Manson family. Take that however you like. I went into the Polanski catalog expecting to confirm my dislike for the director but walked away with respect for his films. Not that I'd advise you to send your seventh grader to a pool party at his place.
Pettibon is also the writer for BoM. His film is huge on dialogue and much of it is solid gold. A nuanced, punk rock, 80's, Manson family? The Marx Brothers crossed my mind several times but only if they were from the dark side or something Idk.
You've heard for years that a California record label was set to release an album of Charles Manson's music in the 1980's but backed out after receiving threats. Filmmaker Pettibon's brother, Greg Ginn, is the owner of that label. I started asking around about the threats hoping someone would say, "Four huge guys in sweatsuits eating gabagool hopped out of a black Cadillac yelling, 'Bada bing we're the Mafia! Big Tony says no record, capeesh?"
And if not the mob then who? Phil Kaufman? Doris Day? How would the public even know? The threats were confirmed but downplayed. "Nothing as serious as you might be thinking."
Got it. Joke threats. So funny you don't put the record out. And don't think I would've either. I was terrified of Charles Manson in the 80's. Everyone "into" him was talking about the Process Church and not  ATWA down at the home place.
Anyway. A couple of years after threats killed the record, Pettibon made BoM. Gutsy to say the least.
The scene at Bobby's might be my favorite. Again nuance. Again irreverence. Janet Housden plays Mary Brunner. Gary asks Bobby, Sadie, and Mary if Charlie sent them. Bobby doesn't like Mary's affirmation, flexes on her, and announces he's running things. 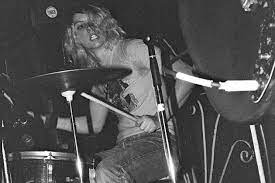 How many Gary arguments have taken place on this blog? Was it the Satans' money or an inheritance? Why did Mary tell Guenther and Whiteley they were after three grand? 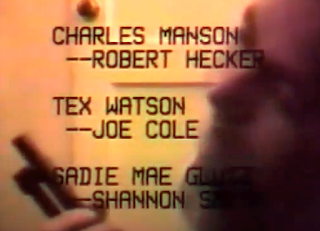 Here's my six degrees. I was pestering Henry Rollins with letters in 1991 while Joe Cole helped with his mail. Thirty years ago today, Cole was murdered by muggers in front of the house he shared with Rollins in the Oakwood neighborhood of Venice Beach, California. Rollins escaped by dodging bullets.
This is Henry talking about Cole's killing. Rollins was the record label's point man with Manson. Joe Cole also worked at SST Records. I was over the moon when Cole's response showed up at my PO Box, and his awful death shook me. Even after they handed over fifty bucks, Cole was shot in the face at point blank range.
Senseless, cruel, and sad. Joe Cole has been dead for almost as long as he lived. I won't ever understand why his death was necessary and wanted to drop a quick shoutout here today in remembrance. Some of you might remember Cole's killing and others will not. I don't drink anymore but if I did, I'd pour a little out for Joe.
Robert Hecker's scenes as Charlie are magic imo. I went stalking him online and almost fell out of my chair so great was my haste to email blog reader Tobias Rabe. Hurdles!
-------------
Here's an associated Cease to Exist cover from back then. Same scene. Housden plays drums on the bonus tracks of the 1986 re-release. Calling the 80's "back then" is like whoa kinda. My sweet Gen X is starting to get old. If you watch BoM, please tell me what you think. +ggw
Posted by G. Greene-Whyte at 9:44:00 AM 23 comments