While looking up things for a post on the blog, every so often stuff pops up that seems like it might be an unearthed treasure.  Upon further reading it turns out that what was found has nothing to do with the Manson Saga.  These are a few of the things I've run across that have made me do a double take, then chuckle or shake my head when reality set in.

Ed Sanders and Maury Terry really missed an opportunity with this first article.  Just think of the conspiracy theories they could have come up with had they stumbled on this one!

WOW!  Charles Manson was murdered.  The timing was right, July 1967, Charlie was out of prison.  The location was right, Oakland CA, right next door to Berkeley in the San Francisco Bay Area.  The age is certainly in the ballpark, about 34 years old.  What could be wrong?

I was curious enough about this one that I located a relative of this Charles Manson and sent her a message through Ancestry.com.   She was a cousin and young at the time of the murder.  Her mom and aunt had given her just the bare facts and she had some unanswered questions.  I was able to email her the article, which she had never seen, and in turn she sent me pictures of her cousin. 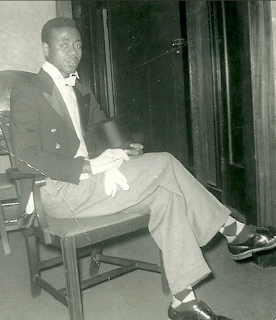 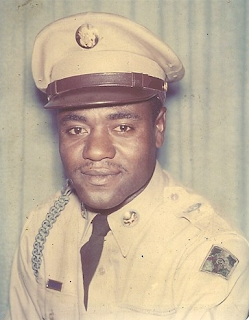 This next one is more humorous than anything else.  The mind plays tricks, seeing what you want to see and not necessarily what is really there.

From the Ukiah newspaper.  Was the Manson Family doing an LSD musical production in Mendocino County in 1968? 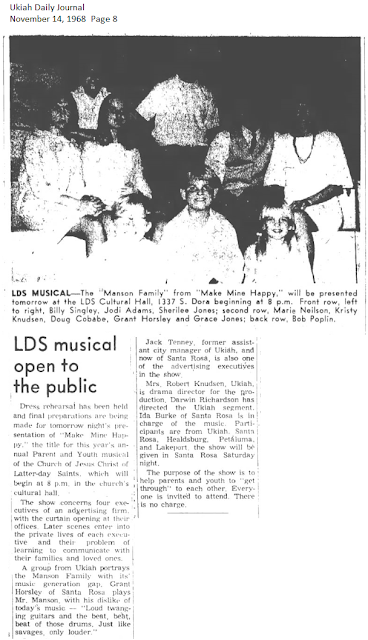 What do you want to bet that there was never a revival of this production after 1969!

Then I came upon something that was purported to be an actual photo of the Manson Family.  The photo appeared in the April 1970 issue of Men's Digest accompanying an article titled "MODERN WITCHCRAFT Part 20- Charles Manson and his cult of Black Magic."

The article was predictable and rehashed the many rehashed stories about the Family written up until that time.  But the photo, OMG, had I found the Holy Grail of Family images?  A picture of the Family at Dennis Wilson's home with Dennis in the picture.  Okay, so the caption doesn't say they are at Wilson's home nor is Dennis mentioned but the home is very nice looking, well furnished and it certainly is not Spahn or Barker.  And, there is a resemblance between the guy sitting in the wing chair in the upper right and Dennis.  The caption begins, Charles Manson, sitting on a rug in the foreground...... 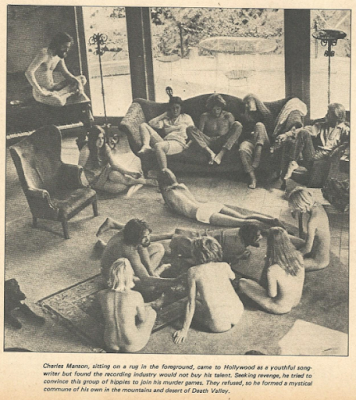 I contacted Jon Aes-Nihil to ask about this amazing find.  He had never seen the picture, so he fired up the Helter Skelter Telegraph.  A frenzy of emails and phone calls ensued.  Comparisons were made of the people in the photo, that could be so and so, this could be such and such, shouldn't  a tattoo be here or there.  We were flummoxed and wanted to believe it could be true.  Then one of the Skelter-ites asked, "Is there a photo credit?"  Brilliant!

There was no credit on or around the photo itself so I went looking through the magazine.  I found what I was looking for.  Right there on the index page down in the lower left corner buried in the publishing info with the smallest print ever, it read, Photos in MEN'S DIGEST posed by professional models.  What a giant letdown......

So if you ever see this photo, which someone will undoubtedly poach from the blog, and it claims to be the real deal, you will know better!

I will leave you with a great Blues tune by none other than Charlie Manson.  This song is titled Nineteen Women Blues.   oo-ee-oo