Apologies if you've seen this one before. It's new to me.

The year she marries Edward Heuvelhorst at age sixteen. 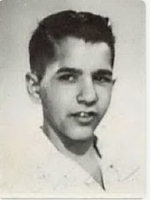 I was searching for a Danny DeCarlo birthdate on Google using "Danny DeCarlo birthdate" as my query terms. Bupkis. After eleven hours of Cielo boxes yesterday, I lacked the courage to hop back in. Fortunately, cielodrive.com had Danny's birthday on his dedicated page.
The story told across the Internet is Danny was born in Canada and became an American citizen after serving in the US Coast Guard. I took that to mean Danny arrived in the States as an adult, but always wondered how he ended up in a bike club in Venice, CA.
Two public records exist for DeCarlo that I am comfy believing are correct. A marriage and subsequent divorce in Oregon. And not to Sherry Cooper.
Searching Canadian records, I left empty handed. No birth. City directories. Nuthin.
All of this is probably minutia but I'd like to remove my questions from my mind. I'm wondering if someone here might point me to a record of Danny's early life in Canada? Anything detailing his arrival in the US would be greatly appreciated. A photo in a Coast Guard uniform would be collector level.
That kid up top looks like Danny to me. They share the same name, and I can't trace the kid beyond his 8th/9th grade photo. Orville Wright middle school feeds students into Westchester and Crenshaw High Schools.
Danny's high school class would've graduated in 1962 or 1963. I'm guessing Westchester but also not sure Danny attended high school. Perhaps hence the Coast Guard. The Satans' Venice Beach HQ was a short drive from the neighborhoods surrounding the middle school.
Do we have any early Sixties Westchester grads in the house? Crenshaw where you at? Somebody please help the green.
Posted by G. Greene-Whyte at 5:17:00 PM 45 comments