Randy Starr was a ranch hand and stuntman who worked and lived at Spahn Ranch.  For a little background George Stimson did a piece on the blog about Randy HERE .
Randy comes into play because he was said to have owned and given to Charles Manson the gun used at the Tate house during the murders.  Randy did not testify at the Tate LaBianca trial because he became ill with an ear infection which went untreated and he developed meningitis and died August 4 1970.

Vincent Buliosi writes in his book Helter Skelter (1994 page 376, in the chapter titled April 1970)-
Another find was Randy Starr, whom I interviewed the same day as Ruby.  A Sometime movie stunt man who specialized in fake hangings, Starr said the Tate Sebring rope was “identical” to a rope he’d once used to help Manson pull a vehicle out of the creek bed.  Starr told me, “Manson always kept the rope behind the seat in his dune buggy.”
Even more important was Randy Starr’s positive identification of the .22 Longhorn revolver, for Starr had once owned the gun and had given it to Manson.
There is a footnote at the bottom of the page which reads-
The gun, serial number 1902708, had been among a number of weapons taken from the Archery Headquarters in El Monte California, during a burglary on the night of March 12, 1969.  According to Starr, he obtained it in trade with a man only known as “Ron.”  Manson was always borrowing the gun for target practice, and Randy finally gave it to him in trade for a truck that belonged to Danny DeCarlo.
Randy Starr testified to a grand jury convened for the death of Gary Hinman.  Charles Manson, Susan Atkins and Bruce Davis were the defendants and it was held on April 9 and 12 1970 in Los Angeles.  This is the only known testimony given under oath by Starr.
14 page pdf
While Randy’s testimony does mention the gun, it is more focused on the knife used to stab Gary Hinman and found in Bobby Beausoleil’s possession when he was arrested August 6 1969. 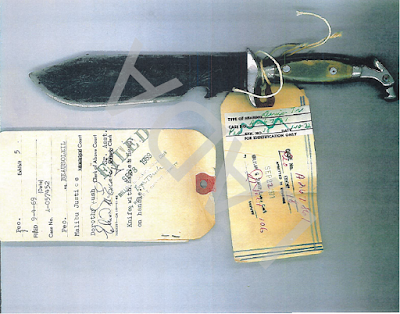 The testimony also focuses on a sword in Manson’s possession.  Starr says it was usually kept in holder in Manson’s dune buggy.
There is nothing in the testimony about the rope used at the Tate murders, nor should there have been because this was a grand jury for the Hinman murder.  Which makes me wonder why the gun was mentioned.  There was a gun used at Hinman’s, not to shoot Gary but during a scuffle it went off and struck the kitchen cabinets and wall.  The bullets that were dug out matched the 9mm Random automatic that Bruce Davis bought under a false name on July 14 1969.  Randy mentions a long barreled 9-shot revolver and a .45 but not a 9mm in his testimony.
All in all I went away a little confused by Randy’s testimony.  It seemed as if Randy was trying to take credit for having provided Manson with many of the weapons used in the Hinman and Tate murders.  I was unaware that the knife Bobby used had originally belonged to Starr.
I have to wonder how Randy would have stood up under cross examination at a trial.