When Did Dennis Wilson Finally Sever His Connection to the Family?

According to the accepted narrative:

“In the late spring of 1968, Wilson had twice picked up the same pair of female hitchhikers while driving through Malibu. The second time he took the girls home with him. For Dennis, home was 14400 Sunset Boulevard, a palatial residence formerly owned by humorist Will Rogers. The girls— Ella Jo Bailey and Patricia Krenwinkel— stayed a couple of hours, Dennis said, mostly talking about this guy named Charlie. Wilson had a recording session that night and didn’t get home until 3 A.M. When he pulled into the driveway, a strange man stepped out of his back door. Wilson, frightened, asked, “Are you going to hurt  me?” The man said, “Do I look like I’m going to hurt you, brother?” He then dropped to his knees and kissed Wilson’s feet— obviously one of Charlie’s favorite routines. When Manson ushered Wilson into his own home, he discovered he had about a dozen uninvited house guests, nearly all of them girls. They stayed for several months, during which time the group more than doubled in number. (It was during Manson’s “Sunset Boulevard period” that Charles “Tex” Watson, Brooks Poston, and Paul Watkins became associated with the Family.)

The experience, Dennis later estimated, cost him about  $ 100,000. Besides Manson’s constantly hitting him for money, Clem demolished Wilson’s uninsured $ 21,000 Mercedes-Benz** by plowing it into a mountain on the approach to Spahn Ranch; the Family appropriated Wilson’s wardrobe, and just about everything else in sight; and several times Wilson found it necessary to take the whole Family to his Beverly Hills doctor for penicillin shots. “It was probably the largest gonorrhea bill in history,” Dennis admitted. Wilson even gave Manson nine or ten of the Beach Boys’ gold records and paid to have Sadie’s teeth fixed.

However, in August 1968, three weeks before his lease was to expire, Dennis moved in with Gregg [Jakobson], leaving to his manager the task of evicting Charlie and the girls.

From Sunset Boulevard the Family moved to Spahn Ranch. Although Wilson apparently avoided the group for a time, he did see Manson occasionally.”

I have even heard it explained that Wilson left his Sunset Boulevard residence because he was afraid of Manson. After they split company by the official accounts Wilson had very little contact with the Family except for three occasions when Bugliosi says either Wilson or Jakobson told him Wilson had been threatened.

But that may not be completely accurate…..

In the December 21, 1968 British publication The Record Mirror a story appeared about Dennis Wilson. It briefly mentions Manson and the Family, “Dennis Wilson: I Live With 17 Girls” by David Griffiths. It can be found, here.

One interesting aspect of the article is the quote attributed to Wilson that seems to suggest that he was having an ongoing relationship with Manson in December, 1968.

“I live in the woods in California near Death Valley with 17 girls.”

The Death Valley reference is at least interesting as that is far from Sunset Boulevard.

Wilson also appears to mention his lodgings with Greg Jakobson:

“Now I live in one small room with one candle and I’m happy, finding myself.”

Given the ‘present tense’ language used by Wilson (that he ‘is’ living with 17 girls) and given the official timeline the only time the interview logically should have taken place was sometime between say late May and early August 1968, the timeframe when Wilson was officially connected to the Family. Then the explanation for the use of present tense might be simply that the interview wasn’t published until December.

The problem is that during that timeframe Wilson was not in England. While the Beach Boys toured during the period they never left the United States. ‘Never Learn Not to Love’ was not recorded until September 11-18, again, after Wilson allegedly broke with Manson.

But then why use the present tense language if he split with Manson in August ’68?

It is arguable that the reference is misquoted. Wilson may have been talking of ‘back then’ and the author may have simply turned them to the present tense to sell the story, especially since the band was touring England.

But why did that happen three times?

The December ’68 story is not the only time after August '68 when Wilson proclaims his present tense friendship with Manson or that he is living with the Family.

Starting with ESQ (http://esquarterly.com/bellagio/gigs69.html) where was Wilson in the Spring and Summer of '69?

The Beach Boys started their 5th European Tour on May 30, 1969. They toured with Paul Revere and the Raiders and Joe Hicks from May 30th until June 22nd.

They were in London on May 31st and June 22nd. They were at other locations in England and Scotland June 6-9th.

In May 1969 this article appeared in Rave magazine, a London based pop magazine. 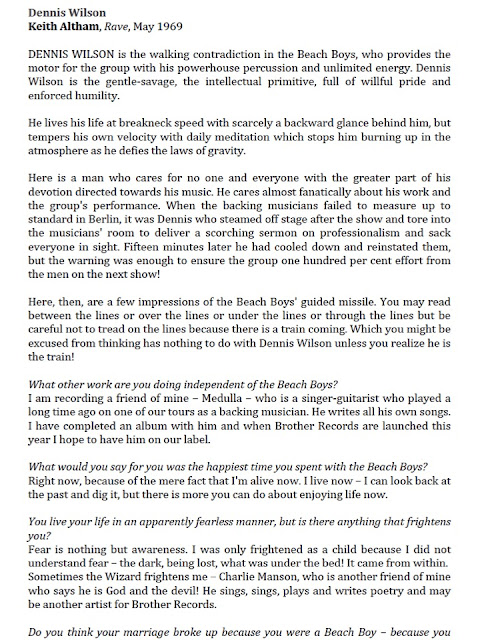 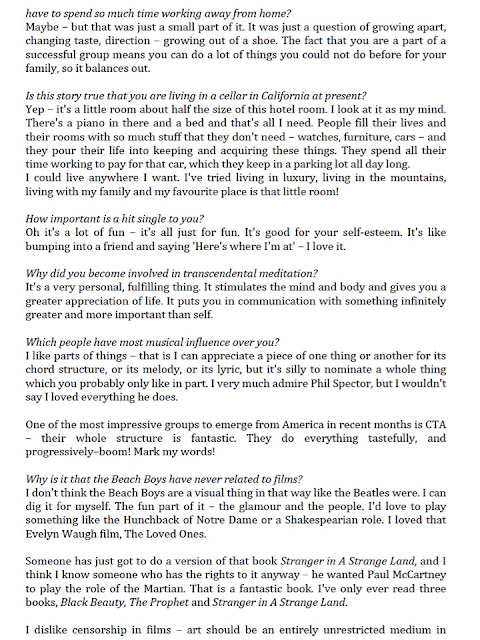 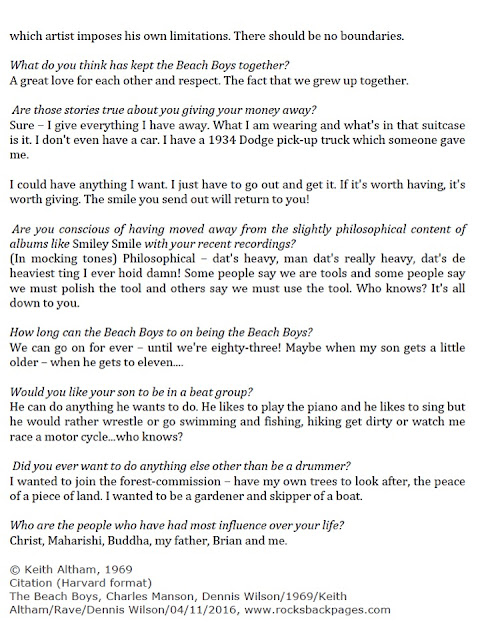 The Beach Boys concert in Berlin, mentioned in the article occurred on May 14th which means this interview could have occurred when the Beach Boys were in London on either May 31st or June 22nd.

But that isn’t all. Lon Goddard for the Record Mirror (again) caught up with Wilson for an article that appeared July 5, 1969. 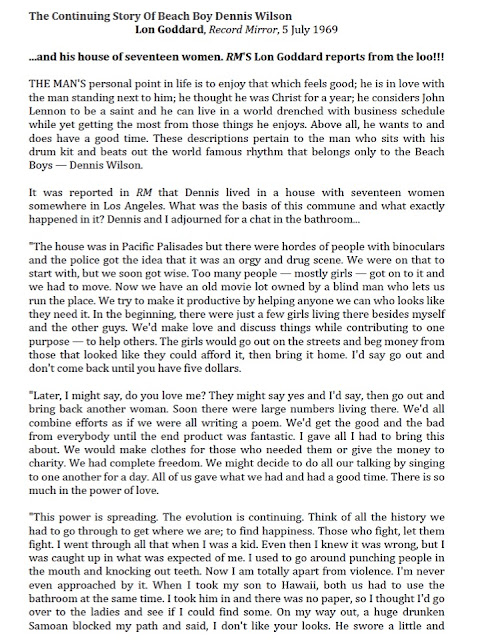 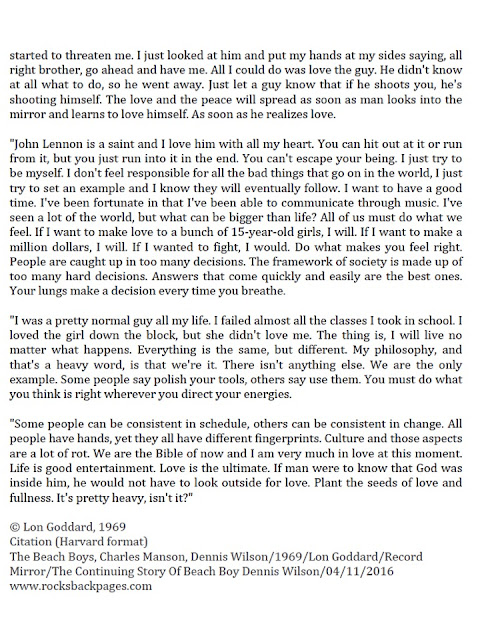 Wilson in both articals from 1969 refers to his ongoing relationship with Manson and the Family and even suggests he is living with the Family at Spahn Ranch During May-June ‘69. The question is ‘why’?

I think one answer is that Wilson was still interacting with Manson in May-June 1969. From ESQ you can see that he didn’t have a lot of time between August ’68 and July ’69 to be in Los Angeles but that could have allowed him to live a day here and there in a room at Jakobson’s and at Spahn.

If that is the case then where did the official story come from?

I think it might have to do with some old-fashioned PR 'damage control'. While their career was ‘fading’ in 1969 the Beach Boys were still one of the top bands (mostly on reputation). They also had, even with the drugs, more of a ‘good boy’ persona. Having Dennis hanging around Spahn Ranch a month before the murders, it seems to me, would not have been very good PR. Remember, after the murders in late August or early September Manson went looking for Wilson to get money (the bullet visit) which may suggest at least Manson still thought there was a relationship there. Since he did ‘abandon his home’ in August ’68 it would be easy to say ‘at that point I split from them’.

It also provides an excuse to not testify. If Wilson was close to Manson in May-June ’69 I think Bugliosi would have been even more eager to interview him. Backing his exit up to August ’68 and refusing to testify drops Wilson down Bugliosi’s witness list to ‘unnecessary’. He had Jakobson and Melcher to fill all that in. Dennis is off the hook and the band is out of the headlines.

That also made me wonder what might have scared Wilson away shortly after the May- June '69 interviews.

[An old law school professor of mine used to have a saying about innacurate or false testimony: “you will find that with some witnesses misstatements or lies are as numerous as the grains of sand on a beach but remember there is always a grain of truth there somewhere.” ]

And that led me to the Mike Love story.

Wilson allegedly told Love: "I just saw Charlie take his M16 and blow this black cat [man] in half and stuff him down the well."

We know this never happened. But we also know that on August 1, 1969 Manson confronted and shot Bernard Crowe, a “black cat”. We also know Manson thought Crowe was dead. Could the Love statement be Dennis embelishing a story he heard while at Spahn? Or perhaps it was Mike Love embellishing a story Dennis embellished that also got garbled after 45 years.

Wouldn’t the delivery of a bullet to Jakobson for Wilson be a far more effective as a threat if Wilson knew that Manson had shot a ‘black cat’?

The timing, at least, is interesting.


There is a reference to the possibility Wilson was still entangled with Manson in Helter Skelter. While discussing the murder of Darwin Scott Bugliosi says this:

“On May 22, 1969, Manson telephoned his parole officer, Samuel Barrett, requesting permission to travel to Texas with the Beach Boys. Permission was withheld pending verification of Manson’s employment with the group. In a letter dated May 27, the same day as Scott’s murder, Manson said that the group had left without him and that he had moved from Death Valley back to Spahn Ranch. To categorize Barrett’s control over Manson as minimal would be an exaggeration. Barrett did not again talk to Manson until June 18.

Barrett did not note the postmark on the letter. He did note that he didn’t receive it until June 3, seven days after it was supposedly written. It is possible that Manson was using the letter as an alibi; it is also possible that he sent one of his killers to murder Scott. But both possibilities are strictly conjecture. The murder of Darwin Scott also remains unsolved.”

However, a check of esquarterly.com reveals there was no tour of Texas in May 1969. There was a tour of Oklahoma and a couple appearances in nearby states earlier in May 1969 but these predate May 22nd. In fact the first tour date after May 22nd is the European tour.

This contact with Barrett is one of the small curiosities of this case. Barrett likely was referring to his file so his information would have been from that file. He might have noted the wrong location for the tour (Texas instead of Europe) but that seems like a strange mistake.

It could also mean Manson lied to Barrett claiming to have such a ‘gig’ and then dropped the request when Barrett asked for verification. Manson may have thought he could pull a fast one: get permission for Texas and just go to England. But Manson would need a passport and while a convicted felon can get a passport there is no evidence I have found that he had one and getting one on a few days’ notice is impossible. On the other hand he may have made up the story to get permission to go to Texas but why would Manson want to go to Texas in May, 1969.

Regardless, it does appear to me that Dennis Wilson didn’t sever his connection to Manson and the Family until early July 1969 (or perhaps even later since the 'bullet visit is late August or early September '69).