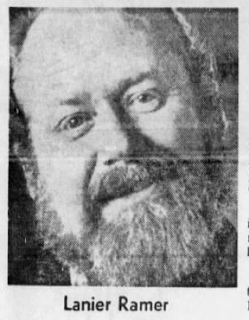 Scientology is one of those doctrines that scares the crap out of me.  It's not so much what I know about the organization, it's what I don't know.  Much to the dismay of the folks at Scientology headquarters Charles Manson, Bruce Davis and even Steve Grogan have been linked to them.  Scientology is pretty well known for trying to cover up any unpleasant connections that they perceive will make them look bad.


Scientology could not back away fast enough from any hint of anyone in the Manson Family having studied their teachings.  Fortunately for us there are any number of ex-Scientologists that are willing to spill the beans and provide documents showing that there was indeed something to a Scientology/Charles Manson connection.  Just Google Charles Manson and Scientology and you'll get tons of hits.


Manson was introduced to Scientology while at McNeil Island Federal Prison by Lainer Ramer who was doing a stint with the Feds for bank robbery.  While I do not know exactly how Ramer got hooked up with Scientology to begin with I do know that he taught what he knew to other prisoners. There is information that Scientology had a prison outreach program in the early days but that is hard to nail down in print.  Ramer was pretty much a career criminal having done a few terms in prison so I have to wonder why Scientology would cultivate him as a member in the first place.  I guess any organization needs its henchmen to do the dirty deeds where the higher-ups don't want to dirty their hands.  Maybe that was their plan for Ramer, get him to recruit people who were not afraid of doing something illegal.


Scientology seemed to endure the rumors that Manson had studied their teachings, all the while denying that he was ever a member, during the TLB trial phase but when it came to Lynette Fromme and her trial they started to freak out.  Lanier Ramer was subpoenaed to testify at the trial about Lynette having asked him if he could get her a gun in the months before the assassination attempt on President Ford. 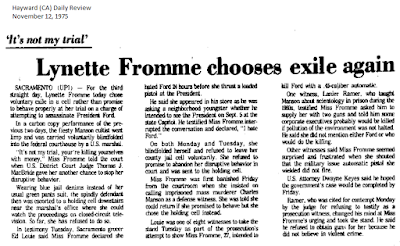 I suppose that the powers that be at Scientology were afraid that Ramer's connection to Lynette and Charlie would come out in court, under oath and recorded in the court documents for all time.  They really couldn't have that and worked some overtime on damage control.  I have to hand it to them, they really did their homework on Ramer.  They dug up facts about him that would have been herculean in the 70s with no internet, no Ancestry.com, no newspaper archives etc.  They had him pegged,  from birth.
Scientology drew up a "Time Track" on Ramer to assess how they were going to tackle the problem. 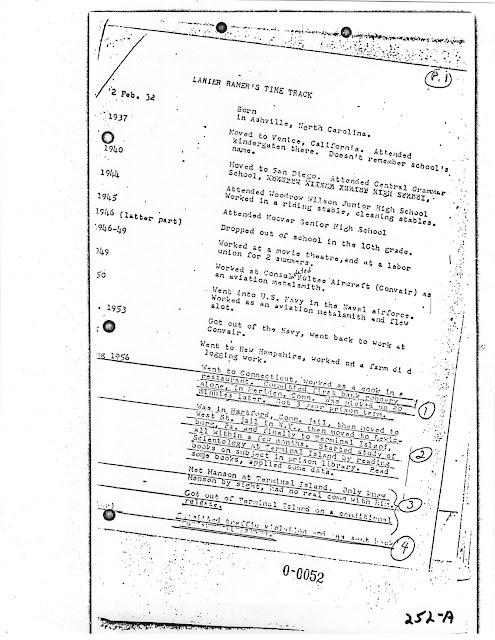 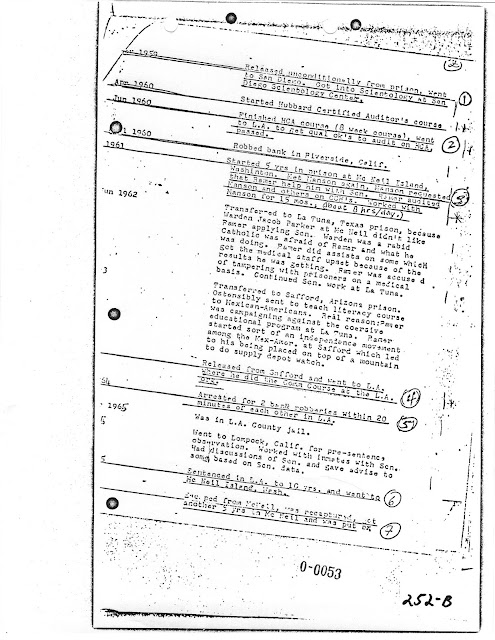 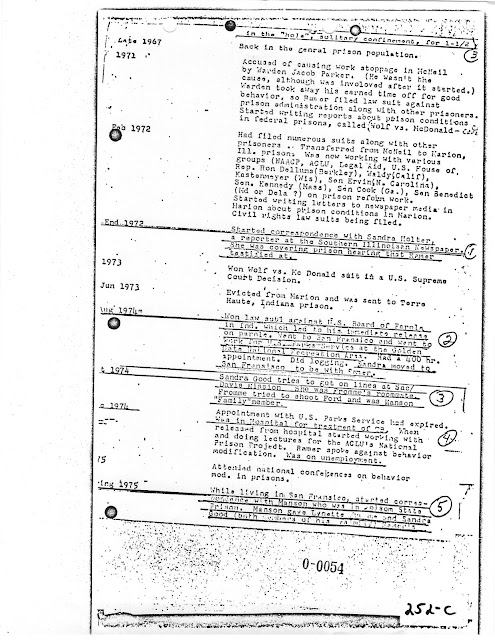 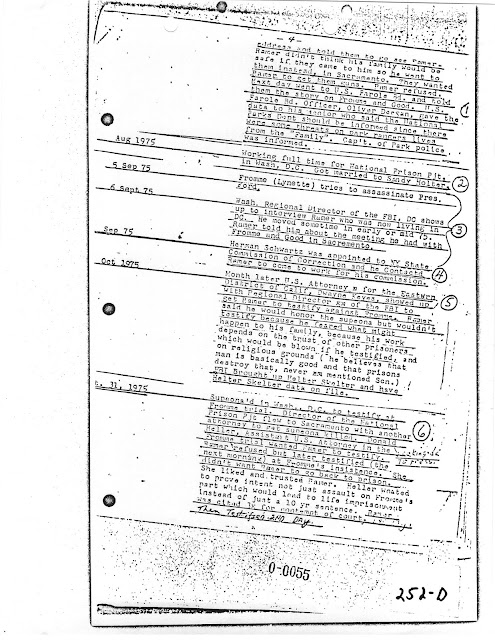 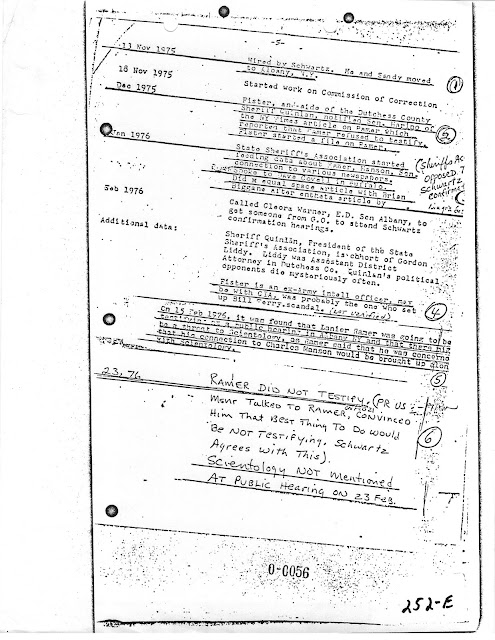 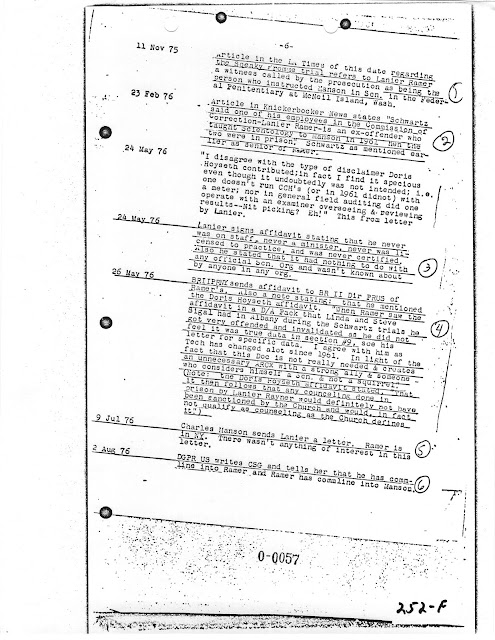 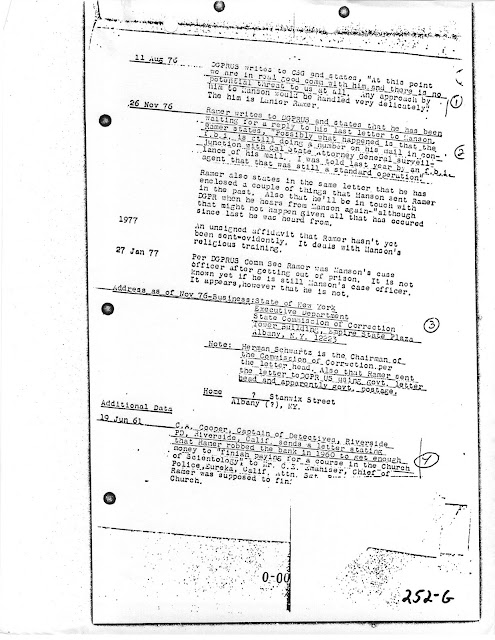 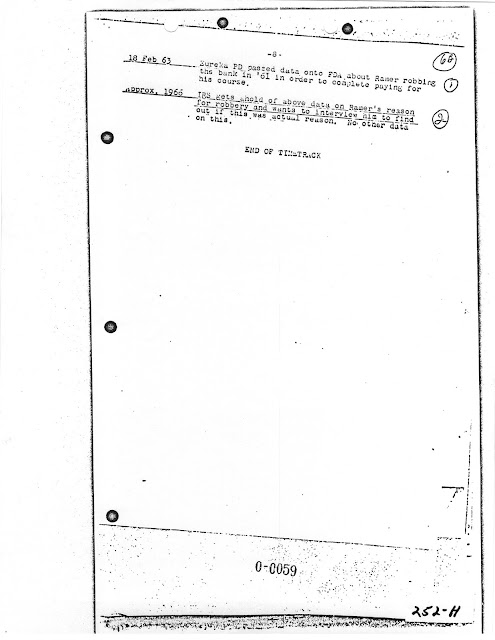 ﻿
Next they drew up a list of possibilities highlighting items in Ramer's Time Track that could possibly be spun to distance themselves from both Ramer and Manson.  Note in #2 they allude to Manson perhaps being fed LSD, presumably a la Project MKUltra.  They end the Possibilities with a paranoid statement that perhaps it was government  who set up Scientology to make them look bad. 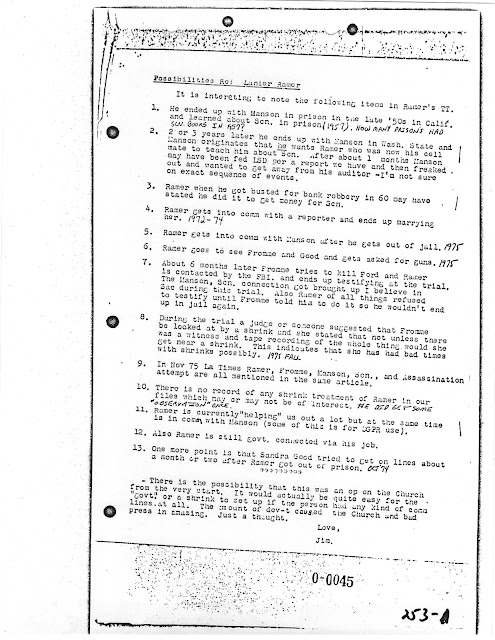 The last of the Scientology documents is a letter that Ramer was made to sign disavowing that he was ever an "agent" of Scientology. 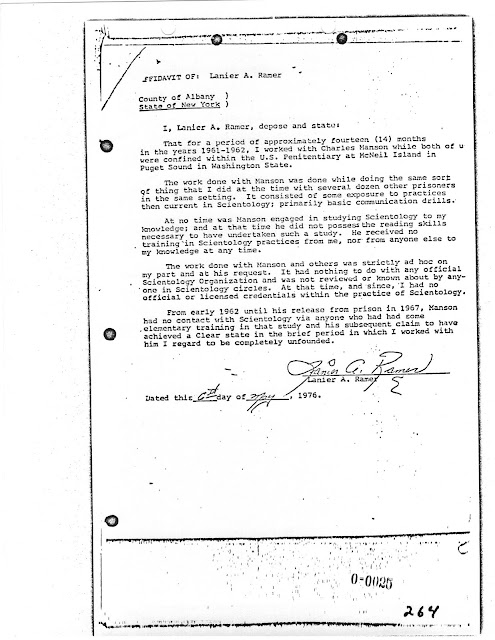 These are some newspaper articles that tell of the bank robberies and related crimes Ramer committed back in the 50s and 60s that landed him federal prison. 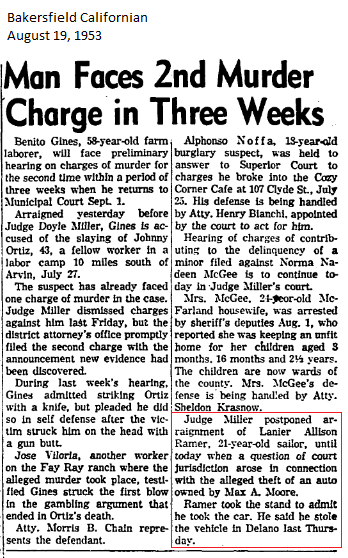 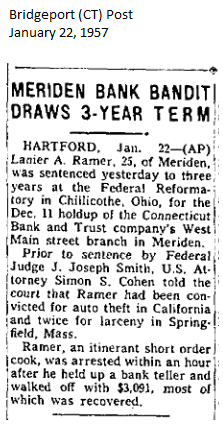 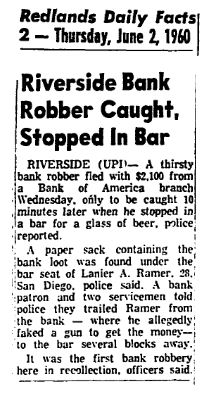 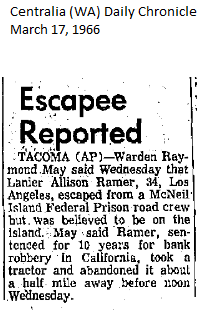 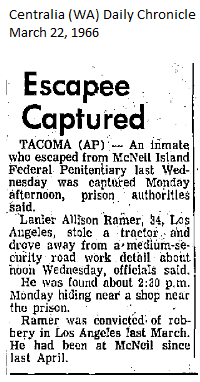 Ramer did eventually, after years in prison, carve a niche for himself by becoming a prisoner's rights activist.  It was because of the strides that he made in this area that he did not want to testify in Lynette's trial.  He had been working for a politician in New York at the time of Lynette's trial and was afraid it would affect his work and the politician negatively.  In the end, it did.

Ramer died in 1980 in Wisconsin where he lived with his wife and children.  Unfortunately I have no idea how he died, getting death certificates from Wisconsin is next to impossible.  He was only 48 years old.