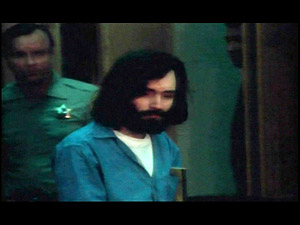 On the recent release of the original 1973 MANSON film on Limited Edition DVDs, the by-line reads: The HORRIFYING and SHOCKING story that never ends!! But that is certainly an understatement. With Roman Polanski's recent arrest in Switzerland, quite possibly a whole new chapter relating to the Tate / LaBianca massacre, will now be played out, One might question, how was the murder of Mr. Polanski's wife and child related to his statutory rape case, eight years later? Are certain people affected by a Manson curse? What similarities in the lives of Charles Manson and Roman Polanski have had an influence on each of their destinies? And why does it all have relevance to today?

First, to not consider that the early childhoods of both public figures had a profound effect on their adult directions, is just plain ignorant. While the young Charles Manson was nothing more than a throw-away child, bounced from American foster homes to so-called institutions for wayward boys, the young Polanski suffered at the hands of perhaps the most evil empire to ever have existed. Both of their early lives and later crimes must be studied in the proper context, in order for any intelligent discussion on the subject to even begin.

But already, battle lines are being drawn, mob mentality is setting in, and most everyone is taking one side or the other, so what is the real issue here? Just as in the Manson Murders case, the Prosecution paints a bleak picture of a depraved defendant. This is to ensure that the public will despise Polanski, even if he is released without serving further prison time. Contrary to popular belief, the practice of law is not about serving justice, but about winning at all costs. Shouldn't we be concerned about why Mr. Polanski fled the US?

While we now know that a specific Prosecutor lied in a documentary film, in order to affect the public's perception of certain aspects of the Polanski case, we may never realize the full effect of the judicial fraud put upon the once reputable legal system. That officers of the court, including a somewhat mentally challenged judge have rocked many people’s faith and belief in American justice, is perhaps the cruelest kind of rape. After all, the equitable and fair administration of justice is all that we the people have, that separates us from an uncivilized world.

Without question, Roman Polanski received a celebrity sweetheart plea deal and for Judge Rittenband to agree to it, well that's the advantage of having a high profile attorney on your side. But apparently, Polanski was not informed that while in the Judges' good graces, nothing more than doing only penance is acceptable. Instead, he was caught by a photographer at an Oktoberfest celebration and the photo found it's way into a newspaper. As far as the Court was concerned, he should have been making a movie and not enjoying any free time.

So a disturbed Los Angeles Prosecutor, who apparently took a special interest in Polanski's personal life, handed the newspaper, with Polanski's picture in it, to the bailiff in Rittenband's courtroom. He said, "Here, give this to the judge", knowing the picture would rub the judge the wrong way. Of course, that should have been the end of it, a childlike game between officers of the court, but when the judge saw the photo of Polanski out on the town, he blew it. Directly to a reporter from The Outlook he commented, "Screw the deal, he's going to state prison". Polanski's attorney found out and Polanski skipped the country. Of course, no honorable jurist would have reacted in such a disgraceful manner, but instead, would have called Polanski's attorney to appear before him in open court and then he would have questioned the attorney regarding the subject issue.

So now we have a very serious situation, where even the President of the United States should step in, as a lawyer, and demand that judicial reform, like healthcare reform be enacted immediately. Be assured, the Polanski matter is not an isolated situation. Judge Rittenband was 72 years old at the time of his dealings with Polanski and most likely dementia was already affecting his thinking. After Roman Polanski fled the states, the judge is known to have commented that he would stay on the bench until Roman was apprehended and that's personal, not related to the business of justice. As for Los Angeles Prosecution's, unethical conduct, how can any person now think that they can get a fair trial or equitable relief in any American courtroom?

There's no doubt but that Rittenband was a brilliant jurist in his younger days, but when his position of public trust became his personal weapon, the administration of justice was not only prejudiced, but sabotaged. Make no mistake, the entire system of American justice is slowing becoming exposed for its cracked foundation and crumbling structure. Actually, it can no longer be rightfully considered a system, but a game of cards where the dealers all have agendas of their own. You can ask any lawyer who practices in any courthouse in America and he can name the judges in his district who really shouldn't be wearing a black robe. Obviously, our founding fathers had no idea that old age can produce a demented mind. When US President Ronald Reagan, while still holding office developed dementia, absolutely nobody had any idea as to what to do. Thank God, things turned out okay.

In the new MANSON book you will discover much dishonesty and unethical game playing amongst the legal players in the Manson murders case, to the extent certain witnesses lied. Susan Atkins could have easily received a new trial. Unfortunately for her, a new trial could have put her back on death row. Now Mr. Polanski finds himself in a similar catch 22. To start anew, he would face multiple felony counts, instead of one lesser charge of having intercourse with a minor.

Should Polanski only have to serve out the remainder of his original 90 day evaluation sentence as that was the "deal" Judge Rittenband agreed upon? But then we the people will not get to see and judge for ourselves the full extent of America's judicial breakdown, as evidenced in the Polanski case?

There is no question that what Roman Polanski did to a thirteen year old girl is reprehensible. And what the Manson Gang did to Mr. Polanski's family defies most all forms of reason, but what two officers of the court, a Prosecutor and the Judge did to destroy the very credibility of the justice system should be considered treasonous.

So why don't we try to learn and understand how horrendous childhood experiences directly affect later life in certain people? No doubt, Judge Rittenband had some dark secrets in his closet and the prosecutor who ignited the whole Polanski legal fiasco, shouldn't he at least be subjected to a 90 day psychiatric evaluation. Otherwise, we are only left to understand that their actions were simply evil and the product of some sort of devil's curse.

Of course, if the Prosecution even senses that putting Polanski on trial will also cause its dirty laundry to be hung out in public, a "deal" will be made. The Federal Court gave Bernie Madoff a quick deal, in order to keep him quiet, thus, it's very likely Polanski will come out just fine. So then, you'll have to read the MANSON book, in order to understand more about how judicial gangsters are taking over American's legal system.

Order The Collection and take advantage of the EVILIZ SPECIAL

$89.95 for the MANSON Media Collection (the MANSON Book and both DVDs - including Priority Mail shipping. The DVDs come in smaller thin plastic cases so everything fits in flat rate package, but includes larger personalized DVD inserts. Must be purchased via PayPal or M.O. Just email rarefilms@yahoo.com for his PayPal account to send payment.