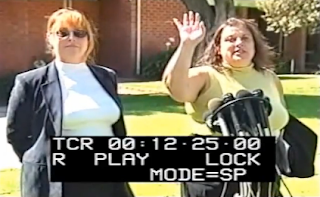 "Lynnette "Squeaky" Fromme, a member of the Charles Manson cult will be released on parole this week. She was convicted of trying to assassinate President Gerald Ford and has been jailed at a Fort Worth federal facility. The release comes near the 40th anniversary of the violent killing spree by Manson's so-called "family members."

"It doesn't seem like 40 years ago," said Angela Smaldino, whose aunt and uncle were among those killed during the spree. "It's like it just happened." Smaldino said life was never the same after Leno and Rosemary LaBianca were murdered. "This murder traumatized the nation," she said. "I couldn't tell anyone I was related to them because they would physically back up and not want to talk to me."

Smaldino, who now lives in North Texas, said her family rarely speaks of that night. Instead, she said, they repressed their feelings and moved on. "And it isn't that they just killed Leno and Rosemary, they killed my entire family," she said. "My grandma, dad, me - all of us suffered some death."

In 1999, Smaldino was the first member of the LaBianca family to show up at a parole hearing for Leslie Van Houten, who has now been denied parole more than a dozen times. "I hope she's changed," she said. "I'm sure she has. She has been in jail a very long time and time itself would make a change, but it doesn't change what she did."

Multiple parole hearings for Mason family members will take place in the coming year. Smaldino said she wants justice and no parole since she said she has felt no remorse from those convicted. "None of us have gotten a letter from them, ever," she said. "Why haven't we?" However, Smaldino said she did forgive so that she could move on. "I don't want them to die feeling like they weren't forgiven," she said. "At least now they know they are." 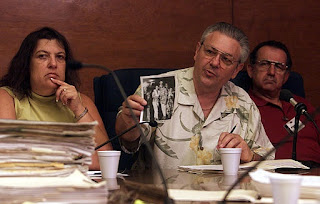 In 2000, Angela was joined by her brother Louis Smaldino and another of Leno's nephews John DiSantis (pictured at right, courtesy of CieloDrive.com) in making public statements against Van Houten's release. In 2006, DeSantis read a letter from Leno’s eldest daughter Cory. In the letter, Cory LaBianca related to the board fond recollections she had from time spent with her family at Waverly and how those memories were fractured by the murders.

You can see video of Angela with Debra Tate here.