My last post on Ruby prompted orwhut to ask who the wrestler was that Ruby Pearl married.  That question got me going again to try to figure out Ruby's background.  I went through dozens of newspaper articles until I found one with her last name.  It's in an article about her little dog Tinker Toy, written when he died in 1961.

Ruby's last name was Molinaro!  With that information I searched for and found her marriage to the wrestler, Michael Angelo Molinaro,  although I was not able to find out anything about Molinaro's wrestling career.   The two were married October 22, 1950 in Los Angeles.  Michael Molinaro was born August 31, 1913 in Pennsylvania and died November 6, 1978 in Grants Pass Oregon.  I'm guessing, given his age, that his wrestling career was in the '30's and '40's.

The California marriage records as well as being in the groom's name are in a woman's maiden name and also in her previous married name if she had been married before.  So I was able to learn her first husband's name, too.  It was Vern Sylvester.  They were in the 1940 US Census listed as living in Minneapolis Minnesota.  Ruby's occupation was listed as a waitress.  Her husband had no occupation listed.

The marriage records I found for Ruby were in her given first name of Pearl.  She was born Pearl Stella Oliver in Sandstone, Pine County, Minnesota on May 18th 1912.  Her parents were Dalton G and Stella S (Hillard) Oliver.  She had two sisters and four brothers.  On the 1920 US Census the Oliver children are listed in order of their ages.  Cecelia, 15; Delbert, 12; Ray 10; Pearl, 7; Irene, 5; Glenn, 2 years 3 months.  By the 1930 US Census there was another brother, Everett, 6; and Cecelia and Ray were not on that census. 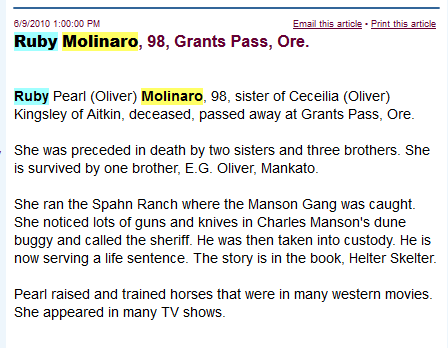