Eviliz reports ahead of the mainstream media: 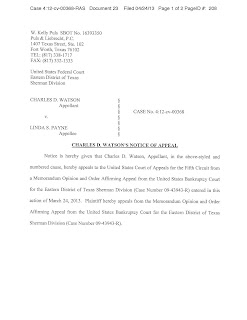 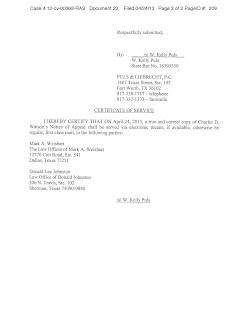 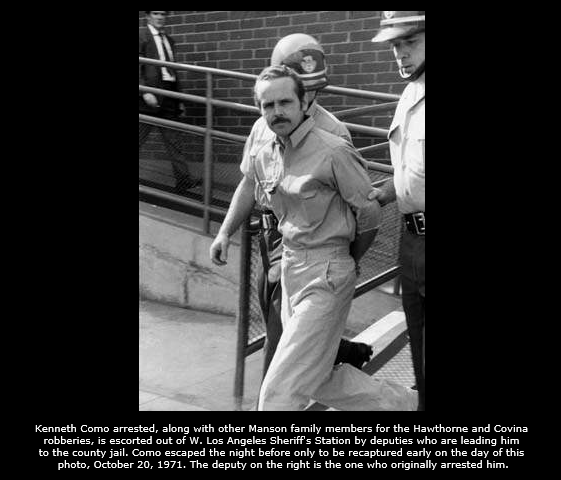 POLICE NAB MANSON PAL IN  JAILBREAK﻿
Kenneth "Curly" Como, a reputed member of Charles Manson's hippie-style clan, was captured today seven hours after a daring predawn escape from a 13th floor cell at the Hall of Justice in Los Angeles.
Sheriff's deputies said Como, 31, was arrested in a residential are of West Hollywood where he had been the object of a massive door-to-door manhunt in a six-block residential area.
Deputies said Como was found hiding in a small shed behind a garage by Deputy Roger Anderson.  Anderson said Como offered no resistance and had no weapons.
The deputy said he just opened the door of the shed and shouted: "Freeze! Come out."  He said Como uttered a brief obscenity when he surrendered.
Mass Search
The shed was located behind a small wood-framed house occupied by Mrs. D.B. Trad, an elderly, partially blind widow who was in her home behind locked doors when Como surrendered.
Nearly 100 sheriff's deputies and policemen had taken part in the search, accompanied by a small army of newsmen and cameramen.  It was their second search of the area- one was made before dawn- and scores of residents still in their bathrobes and slippers watched from their doorsteps.
Como was awaiting trial on charges of armed robbery and assault.  He and four other reported Manson Family members were arrested Aug. 21 following a brief shootout at a Hawthorn Calif. surplus store in what police said was an attempt to steal guns.
They said Como escaped from the facility in a waiting car.  The car was spotted by a police mobile unit in Hollywood and a brief chase ensued until the stolen car crashed.  Police said Como escaped on foot through an alley and a person in the car, Sandra Good, a clan member, was arrested for investigation of aiding and abetting an escape.
An all-points bulletin was issued for Como and two other alleged Manson Family members, both women.
The Sheriff's department issued an all-points bulletin for Como and deputies conducted a house-to-house search for him in a sealed off two-block square area of West Hollywood, where he has escaped.
Deputies also arrested five more persons, in addition to Miss Good, all said to be Manson clan members.  They were booked for investigation of conspiracy to aid and abet an escape.
They were identified as David Lee Stauffer, 20; Susan Bartel, 20; Katherine Lutesinger, 19; Lynn Alice Fromme, 23; and Nancy Pitman, 23.
Los Angeles police said prior to his arrest in the Hawthorne robbery incident, Como had escaped once before while being brought from Folsom to testify at Manson's trial in the slaying of a Malibu musician.  Como had been serving a term for armed robbery, police said.
Star News Pasadena CA October 20, 1971

Kenneth Como was born in Morrison County Minnesota November 22, 1939 to Ernest and Mae Como.  He died September 4, 2004 in California.  The Social Security Death Index does not give the county where he died.  The last known address for him was in Rialta CA.

According to the 1940 US Census Como had three older sisters and his father was employed as a foreman for WPA Park Improvement.  The family was living in Little Falls, Minnesota.﻿