As the current NBC television series Aquarius demonstrates, Charles Manson did not fade away into obscurity after his murder conviction and sentencing in 1971. Instead he has lurked just under the surface of American consciousness, breaking through every few months just to remind people that he is still around. One such surfacing was during the "Charlie Don't Surf/Guns N' Roses" contretemps of the early 1990s. 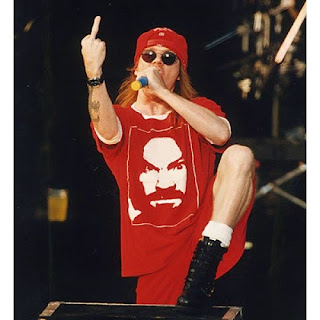 "I wore the T-shirt because a lot of people enjoy playing me as the bad guy and the crazy."
-- Axl Rose

It started with something as simple as a T-shirt. While today Manson-themed T-shirts are fairly common, in the early '90s they were less prevalent and there was still some daring connected with wearing one. One outfit producing such apparel was Zooport Riot Gear, run by brothers Dan and Richard Lemmons in Newport Beach, California. Two surfer dudes, the Lemmons brothers offered a complete line of clothing for their casually attuned clientele. Among those offerings were T-shirts emblazoned with the famous image of Manson from the cover of Life magazine on the front and with the captions "Charlie Don't Surf" (a line taken from the movie Apocalypse Now) and "Support Family Values" on the back. (The brothers also sold ball caps and watch caps with similar images and slogans.) The shirts soon caught the eye of rock musician Axl Rose of the then popular group Guns N' Roses. Rose had also worked out a version of the classic Manson song "Look At Your Game, Girl" for inclusion on his group's current album The Spaghetti Incident?, a collection of cover versions of songs by other artists, and he took to wearing the shirts while performing in concerts in support of the album. Thus, by highlighting both Manson's image and his music, Rose scored a "bad guy and the crazy" twofer. (The song is not listed or acknowledged on the CD and is technically presented as the last half of track 12. Manson gets a tip of the Rose bandana at the end of the song when the singer says, "Thanks, Chas.") 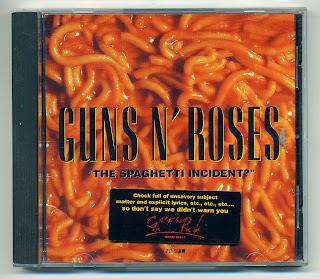 To its credit, MCA Records (the parent company of Geffen Records, G N' R's recording label) recognized that even murderers are due royalties on songs they composed (See Jim Gordon and "Layla") and thus sent a letter to Manson acknowledging the fact that he owned 100% of the royalties due for "Game" and that he would be paid accordingly.

Below, letter and copyright license agreement from MCA Records acknowledging Manson's right to royalties from the Guns N' Roses recording of "Look At Your Game, Girl" 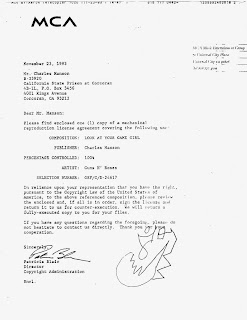 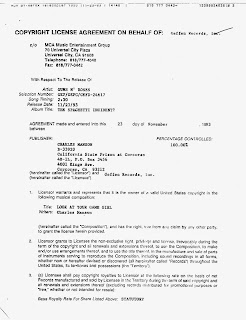 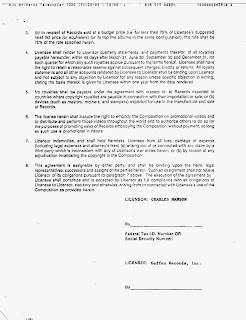 It was only a matter of time before all of this in-your-face behavior attracted the attention of, well, just about everybody. Newspaper editorials voiced their outrage at the glorification of the country's most infamous mass murderer. Manson prosecutor Stephen Kay said, "These men [the Lemmons brothers] are taking advantage of kids who don't understand what Manson stands for or what he did. They're making a folk hero out of a cold-blooded murderer."  Manson's former co-defendant, Susan Atkins, also made her opinion known when she wrote, "How can anyone endorse this profiting on the infamy of such a hideous criminal? ....To make a novelty out of a person like Charles Manson, whose self-serving wickedness (I can attest) is beyond any of your comprehension, is truly unconscionable.... While, to a younger generation who was not alive at the time, Charles Manson must seem like a cartoon character, I can assure you.... that his depravity and depth of cruelty make him a truly base human being, deserving of no one's attention, let alone admiration." 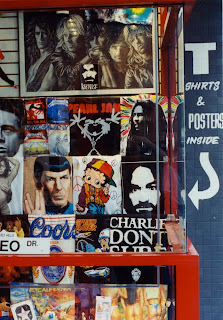 A shop window in the Haight-Ashbury neighborhood of San Franciso, 1993
Below, the Hazleton (PA) Standard Speaker is appalled. 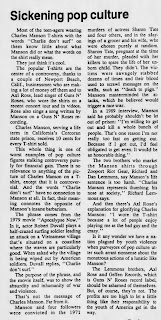 But the most significant person to get wind of the whole affair was Los Angeles attorney Nathaniel Friedman. In 1971 Friedman had won a wrongful death lawsuit filed on behalf of his client Bartek Frykowski (the son of "Manson Family" victim Voytek Frykowski) against the convicted killers of his father, i.e., Charles Manson, Charles "Tex" Watson, Susan Atkins, Patricia Krenwinkel, and Linda Kasabian (who was adjudicated as responsible for the murder in the civil suit). The original judgement was for $500,000, but since no payments had ever been made on it interest had accrued over the years until the new judgment amount was $1,411,482. Lawyer Friedman sprang into action on behalf of his client and served notice on both Zooport Riot Gear and Geffen Records that any royalties or payments due to Charles Manson would immediately be seized in order to pay off the civil judgement.

And that's what happened. The paperwork was filed, the parties involved were notified, and when the dust settled over $75,000 had been paid by Geffen Records and Zooport Riot Gear towards the settlement of Bartek Frykowski's suit (or at least towards the lawyers fees).

Below, the Petition for Order Approving Service of Writ of Execution. Manson is puzzled at the signature of the approving magistrate, which was apparently done by rubber stamp. 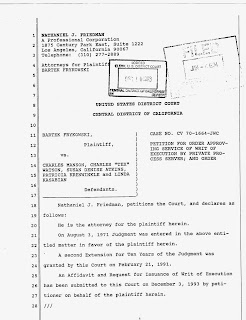 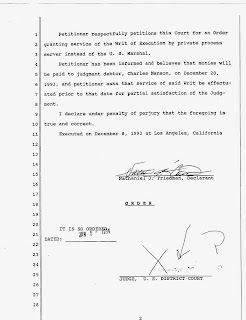 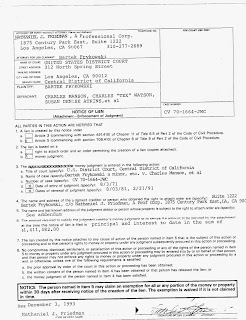 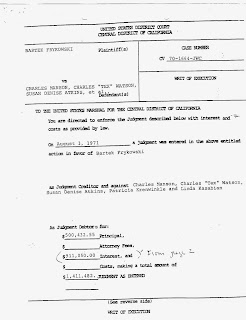 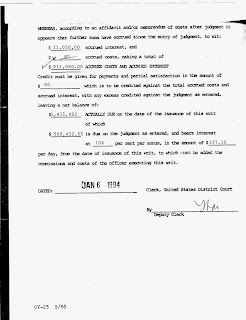 Below, the Notice of Levy against Geffen Records. Manson protests, "Song was written in the 1960s." 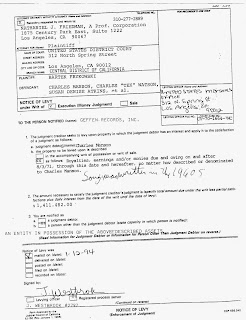 Below, the Notice of Levy against Zooport Riot Gear 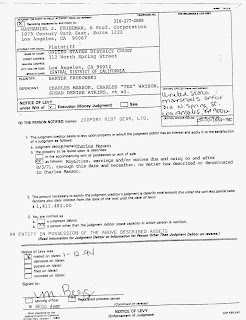 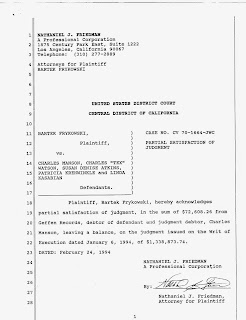 Royalties from both the recorded song and T-shirts sales slacked off soon after the initial excitement however, so Frykowski was still awaiting over $1,000,000 in awards at the time of his death in Gluchy, Poland on June 8, 1999 at the age of 40. (Frykowski died of stab wounds that the local coroner determined were self-inflicted.)

Charles Manson himself took the whole episode in stride. And as a token of his appreciation to the Lemmons brothers and their infamous sartorial offerings that had touched off the whole affair he created an artwork that was grotesque even by his standards. The Texas Hemorrhoid, a monstrosity made of paint, plaster, rocks, and miscellaneous debris, was sent out of the California State Prison at Corcoran in late 1993 and immediately dispatched to Los Angeles where it was presented to Dan Lemmons by Sandra Good in a gas station parking lot. (The Lemmons brothers were natives of the Lone Star State, hence the artwork's name.) 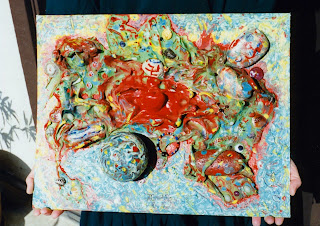 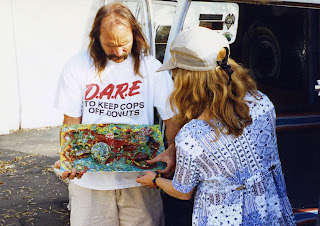 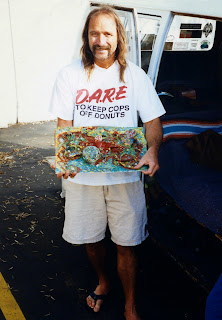