This post will briefly touch on a period in Abigail Folger's life, from approximately August 1967 to August 1968, when she lived in New York City. For those unacquainted with Abigail's life before or after this period, please refer to the following posts by David

It has basically been accepted that Abigail Folger accompanied Andreas (Andy) Brown to New York, driving across the country from San Francisco in August of 1967. Abigail was said to be interested in "probing the other side of life," although this comment needs to be verified. Mr Brown, on the other hand, was most certainly en route to New York with one certified goal in mind: he was to purchase the famous Gotham Book Mart at 41 W 47th Street from the iconic Frances Stelof, who opened the store in 1920.

Upon arrival in New York, Abigail rented an apartment in the Upper West Side of Manhattan, and took a job for a short time with a publisher, before joining Andy Brown at the Gotham Book Mart where she subsequently found employment. The aforementioned is basically well known, and is derived from what others have said about Abigail. What has been historically missing, of course, is biographical information on that period in Abigail's life from her perspective.

Always unsatisfied with the lack of original material on Abigail, I have embarked on a research mission, with the hopes of finding biographical material that originated from Abigail herself.

Knowing that historically Abigail was introduced to Voytek Frykowski by the writer Jerzy Kosinski in New York, in either December of 1967 or January of 1968, I set out to research the archived papers of Kosinski at Yale University, hoping to find some clues there. This is no small task, as the archives are contained in some 194 boxes, spanning 80 linear feet, which include personal papers, photographs, correspondence, and ephemera.

It is in one box of correspondence, early in my research, that I chanced upon a unique discovery. I found a letter, typewritten by Abigail Folger on her personal stationery, to a friend, dated May 23, 1968. I have not seen this letter published or discussed anywhere before. It is three pages long, and is unsigned. Although additional pages of the letter may exist, they may be somewhere in the vast archive, so hopefully this and other materials may materialize as I continue my search.

I have obtained permission to publish the letter, and do so here for what is likely the first time in 52 years: 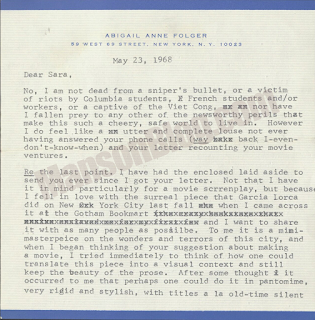 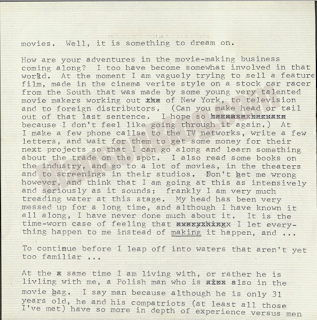 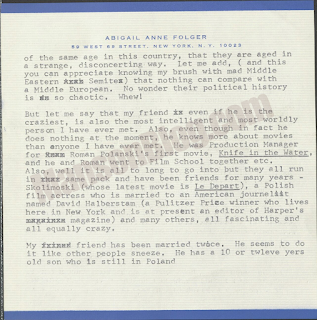 Anyone with knowledge of Abigail and Voytek will recognize immediately what she is speaking about in her letter. Yet this may be the first time that the words come from Abigail herself. I find it revelatory that she describes Voytek as "the most intelligent and most worldly person I have ever met." We now also know that by May of 1968 she and Voytek were indeed living together.

As well, the first half of the first paragraph of page 1 is especially poignant. Here Abigail is referring to the sniper's bullet that killed Martin Luther King a month before; the Columbia University student protests taking place further up the west side of Manhattan; and of course the Vietnam War.

What is chilling, however, is the following: "…nor have I fallen prey to any other of the newsworthy perils that make this such a cheery, safe world to live in." Of course Abigail could not have known that exactly 443 days after writing her letter, she would ironically fall victim to a most newsworthy peril indeed—the Tate/Labianca murders, or as it became known, "the crime of the century".

Also of note is the fact that, by May of 1968, Abigail's interests move beyond her much-discussed love of books to include film. Could it be that Voytek got her interested in film making and distribution? Incidentally, on the first page one will see a long strike-thru after Abigail discusses the Gotham Book Mart. After a close look at the deleted sentence, I can see that it refers to the bookstore, and I make it out to read, "…the crazy bookstore that employed me for my first few…" She probably meant the first few months that she was in New York.

Abigail does bring up the name of Roman Polanski, but she does not volunteer if she had yet met him. Sharon Tate also accompanied Roman to New York during the filming of Rosemary's Baby, which took place in the autumn of 1967, but there is no indication that she met Sharon then either. One scene of the movie takes place at the Gotham Book Mart, featuring Mia Farrow shopping for books on witchcraft.

The film was subsequently released on June 12, 1968. At the very least Abigail may have watched the filming at the bookstore, and at the Dakota Apartments just three blocks north of her apartment, but of course this remains unknown.

What appears to be known from the letter is that Abigail may have spent time in the company of the director Skolimoski, actress Elzbieta Czyzewska, who was married to writer David Halberstam, "and many others, all fascinating and all equally crazy." This would no doubt include the artist Witold-K, who painted a now famous picture at Abigail's apartment. Arguably it was Kosinski who introduced Abigail to these people. Abigail also uses the word "crazy" several times in her letter, the ultimate significance of which is unknown. It may be that "crazy" is a quality that appealed to her, as someone who was described to be a "restless soul"; offering a respite to the disillusion and harshness of life she ostensibly saw around her.

Abigail volunteered that, "my head has been very messed up for a long time, and although I have known it all along, I have never done much about it. It is the time-worn case of feeling that I let everything happen to me instead of making it happen, and…" One may wonder if this statement is a catalyst that would compel Abigail to obtain psychiatric treatment from Dr Flicker in Beverly Hills a year later.

The address Abigail includes in her personal stationery finally clears up exactly where she lived on the Upper West Side: 59 W 69th Street. The building is a former townhouse, which was built in 1910. It now contains ten apartments. Although it is unknown what Abigail paid for rent in 1967-1968, units are renting in this building today for $2,900 a month.

Abigail's address on west 69th Street is between Central Park West and Columbus Avenue, on a lovely tree-lined block. It is a smart location, too, as it is a block away from Central Park and Tavern on the Green. Meanwhile, Lincoln Center is just three blocks south of the apartment. 66th Street bisects Central Park and leads one to the Upper East Side, and to the apartment of Kosinski. Abigail could make a very short walk north to W 72nd Street to catch the subway, at the foot of the famous Dakota apartment building, which of course factored so highly in Rosemary's Baby. The Gotham Book Mart is a comfortable 20-minute walk, and I have made the same walk countless times when I lived on the Upper West Side of Manhattan.

Beginning in 1969, Abigail's street became the epicenter for what has become a wildly popular Halloween block party.

Additionally, Abigail's brother, Peter, was married on January 20, 1968 at the Church of St Vincent Ferrer at 869 Lexington Avenue on the Upper East Side of Manhattan. Abigail was a bridesmaid. She most likely knew Voytek at the time, but there is no indication in her letter of Peter's wedding, or if Voytek may have accompanied Abigail to the wedding as her date. It should be remembered that Sharon Tate and Roman Polanski were married in London on the same date. 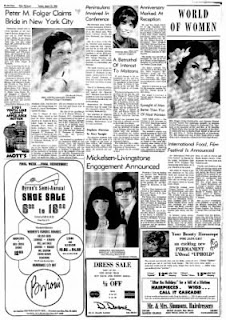 My research into the Kosinski archive continues, and hopefully I will be able to locate additional material on this period in Abigail Folger's life.