Lone Pine is located in the Owens Valley, Inyo County.  It's about 15 miles south of Independence where Manson and the others were jailed after the Barker Ranch raids.

According to this article Susan Atkins was taken to the sheriff's station in Lone Pine and questioned for the murder of Gary Hinman.

Lone Pine is also where the blog has visited and stayed while on tour.  It's a thriving desert town with good hotels, great food, The Museum of Western Film History and Jake's Saloon, a place we never miss visiting.

Dozens, if not hundreds, of movies have been filmed in and around Lone Pine.  Even the plot of Roman Polanski's film Chinatown had its roots in the Owens Valley.


Pulling Dollars Off the Wall

The shutdown hammered towns in the Owens Valley, but one Lone Pine bar owner found some cash within reach

JAKE’S SALOON owners Forrest and Sherri Newman chat inside the Lone Pine bar. “The lockdown hit us like a tornado,” said Sherri. “I felt hopeless and lost, wondering how on Earth we could pay the bills.” (Photographs by Brian van der Brug Los Angeles Times) SHERRI NEWMAN and employees took the dollars off the walls, but she kept some, including the one commemorating the death of her father.

This is a time of year that many rural towns in the Owens Valley usually celebrate — rodeo and fishing season.
Normally, tourists from Southern California would be swarming into the eastern Sierra Nevada range, streaming into Old West facades and making cash registers sing.

But the deadly virus that locals have come to call “The Big Weird” has changed all that.

Today, the towns of Lone Pine, Independence, Big Pine and Bishop are silent except for the rumbling of passing trucks on U.S. Highway 395. Nearly everything is closed: tackle shops, art galleries, restaurants and saloons with swinging doors.

Two of the biggest social events of the year — Mule Days and the California high school state rodeo finals — were canceled. The annual ritual known as “Fishmas,” opening day for trout fishing, was pushed back a month to May 31.

In a landscape of stunning contrasts — blue-ribbon trout streams, meadows resplendent with wild iris, cattle ranches and desert plains flanked by lava flows — there is no camping, no rock climbing, and no bagging 14,505-foot Mt. Whitney, the tallest mountain in the contiguous U.S., because the road that hikers use to reach the trailhead is closed.

When it comes to containing the coronavirus, Inyo County is a success story: 19 cases and one death reported in an 18,000-square-mile district that is home to 17,000 people.

But Inyo County is also a place where that seemingly good news threatens to upset the symbiotic relationship between its isolated towns and tourism.

“We haven’t had a new case reported in 31 days,” said Leslie Chapman, assistant county administrator. “But when the economy reopens, our tourists will be coming from coronavirus hot spots.

Inyo is also a place where the concept of essential business is, as county Supervisor Dan Totheroh put it, “bogus.”

“Food, medicine and guns, for example, are classified as essential,” he said. “So, if you have any of those things in your store, you can remain open.”

Confusing guidance from officials on what counts as safe in towns with economies based almost entirely on tourism has triggered complaints that the lockdown is not justified in Inyo County. At the same time, business owners are under the gun to repay the bank loans they took out when it seemed the boom times would never end.

“The painful lesson in all this,” Inyo County Supervisor Matt Kingsley said, “is that we should be diversifying because the tourism-based economy is not as stable as we had come to believe over the decades.”

‘But here’s the good part of my story’

The Owens Valley is a place where, if there is a common attitude, it is one of survival.
It recently inspired Sherri Newman to discover an answer to her financial problems stapled to the walls of Jake’s Saloon, a century-old hangout for fishermen, ranchers, mountain climbers, skiers and environmentalists in Lone Pine, a hamlet of 2,200 residents about 180 miles north of Los Angeles.
“The lockdown hit us like a tornado,” recalled Newman, 57, who owns the business with her husband. “I felt hopeless and lost, wondering how on Earth we could pay the bills and keep staff on the payroll.”

“But here’s the good part of my story,” she added, leaning forward and placing her hands flat on the bar. “I remembered the thousands of one-dollar bills that customers have stapled to the walls over the decades.”

“I asked a few employees and girlfriends to help take them down,” she said with a smile. “It took two full days to finish the job.”

“Split five ways, we each got about $500,” she said. “That includes a woman who had lost two jobs because of the pandemic, a woman with a mother in hospice care, and a mother of three small children going through a divorce. There was also a single dad who needed the cash.

SHERRI NEWMAN and employees took the dollars off the walls, but she kept some, including the one commemorating the death of her father.

“Now,” she added, “our goal is to hang on to the place through summer.”

$10 for a large sack of popcorn

Three months after the pandemic darkened movie theaters across the nation, the 96-year-old Bishop Theatre on Main Street has been transformed into a popcorn to-go restaurant.

One side of the theater’s old-fashioned jutting marquee keeps spirits up with a moving message: “Here for you since 1924 — stay strong, Bishop.” The other side is strictly business: “Grab and go fresh popcorn, Thursday through Saturday, 3 to 6 pm.”

Each day, dozens of supporters line up to exchange $10 for a large sack of popcorn as part of an effort to keep the theater from going under.

Inside, co-owner Holly Mullanix, who started working at the snack bar in 1983, presides over the popcorn machine that she said “keeps us in people’s minds and enables us to keep a few employees on the payroll.”

“It also helps pay a mortgage on the property and repay a major loan taken out to remodel the place,” added Mullinax, nodding appreciatively toward the lobby’s dark wood paneling and marble floors and countertops.

Under emergency regulations adopted during the pandemic, all nonessential businesses including movie theaters were ordered to cease operations. Newman’s sideline is exempt, she said, because it provides “an essential food supply,” in this case, popcorn — with butter upon request.

The situation is “weird and not fair to people like me,” grumbled Mark McClean, who runs a consignment shop across the street and was recently slapped with an 18-page formal warning to close his front doors or risk civil and criminal enforcement actions.

But it’s not just the movie theater, added McClean, 65, leaning back in a chair in front of the wide-open doors of his shop, surrounded by colorful patriotic imagery including wooden pallets painted to resemble American flags. A large store sign that says “Open” dangled over his head.

A nearby hardware store was enjoying booming sales of gardening equipment and plants, he said. Two doors down, a camera store was open for business.

“If they want to try and arrest me, I’m ready,” he said. “As I explained to the police, my shop is closed. But I keep the front doors open because I like fresh air. Orders can be made legally online, with curbside deliveries handled in the alley behind the shop.”

Impact of the lockdown is huge

Squeezed between the Sierra range and the less lofty coffee-colored White Mountains to the east, the towns of the Owens Valley have existed as colonies of sorts since the early 1900s, when Los Angeles began pumping so much local water into its aqueduct system that it became impossible for farmers and ranchers to make a living. The scheme was dramatized in the classic 1974 film “Chinatown.”
Yet, a regional economy took root, and today it is heavily dependent on gasoline, occupancy and property taxes paid by the city and millions of northbound travelers along U.S. 395 throughout the year.

The potential impact of the lockdown on revenue generated by those taxes is huge in a county where they account for a large portion of its discretionary revenue.

“We’ll get through this,” said Clint Quilter, county administrative officer. “But it’s going to take some belt tightening.”

Some pictures of the bloggers hard on the job at Jake's Saloon. 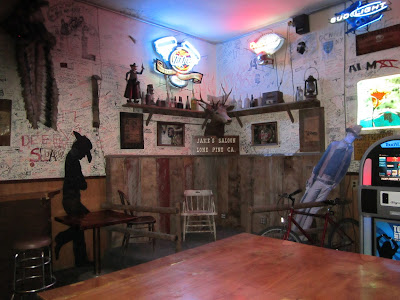