One of my recent meanderings took me to the Santa Barbara, California area, during which time Deb presciently hipped me to the fact that Ivor Davis would be making an appearance (that very night!) at the Museum of Ventura County in nearby Ventura. 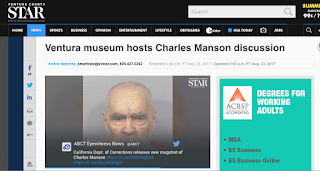 Ivor Davis, as students of TLB know, was the co-author (along with Jerry LeBlanc) of Five To Die, one of the earlier books written about the Tate-LaBianca murders. Like Lawrence Schiller's The Killing of Sharon Tate, Die was actually published before the murder trial of Charles Manson and his three co-defendants even started. Thus, it serves as one of the earliest proponents of many aspects of the case that are accepted as fact even today. It's all there: the drug use, the orgies, the rituals, the mind control, the failed music career, the "Family," the Bible, the Beatles, Helter Skelter -- it's all really there, in a book published seven months before the beginning of the trial of Manson and others. 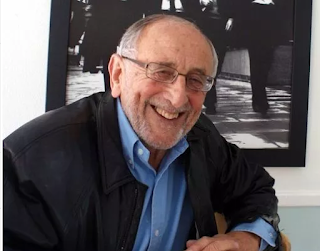 Above, Ivor Davis
Below, the original edition of Five To Die 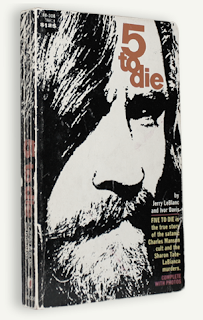 Five to Die is the result of Davis being assigned the task of reporting on the murders by his bosses at The London Daily Express. The Express was (and is) a sensationalist tabloid that was once characterized by Britain's Prince Philip as "a bloody awful newspaper. It is full of lies, scandal and imagination. It is a vicious paper." Lies, scandals, and imagination -- that description fits Five to Die to a T.

Die is based in large part on interviews conducted at Spahn's Ranch with Paul Watkins, Brooks Poston, and Juan Flynn, a trio of malcontented "Mansonites" who early on recognized the value of peddling sensational stories to the bloodthirsty media. How riddled with errors and untruths is Five to Die? I hadn't read this book in decades, so I skimmed it again in preparation for this post. Time and space prohibit a point by point refutation of all of the errors in this book here, but suffice it to say that aside from some interesting historical photos it is full of myths, sensational fabrications, misrepresentations, exaggerations, innuendoes, and untruths.

Nevertheless, Die had a major impact on the entire TLB phenomenon, and Davis is very proud of that impact. Although Bugliosi dismissed the book in Helter Skelter as "a quickie paperback" (see Helter Skelter, Bantam paperback edition, 1975 page 399) Die in fact was instrumental in establishing much of the mythology that surrounds the Manson case to this day. "Our book," Davis later wrote, "was rushed out in paperback in January 1970, seven months before the trial began. It was the very first book to catalogue the bizarre story of life with Charlie Manson." 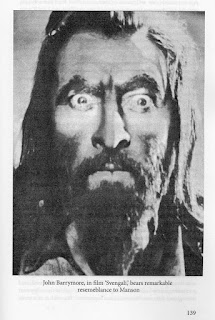 An example of Five to Die fear-mongering

But Five to Die was more than just one of the earliest sensational accounts of the Tate-LaBianca murders and "the Family," for according to Davis the book was actually responsible for the state of California's victory in the murder cases against Charles Manson et al. "Several years [after the murder trials] I ran into former Los Angeles Deputy District Attorney Aaron Stovitz," Davis later wrote. "Much to my astonishment, Stovitz dropped a bombshell, a complement to me, but a bombshell nonetheless. 'Your book was the blueprint for the prosecution of Charles Manson and his Family,' he said. 'It was all there for us to follow.'"

In 2009 Die was rereleased with a forward and afterword sandwiching a reprint of the original book. The new edition featured a summary of the police investigation leading up to the trial and a recap of the trial itself. (As an aside, I was surprised to find a reference to me on page 28, a reference which I consider inaccurate, if it's at all true.) 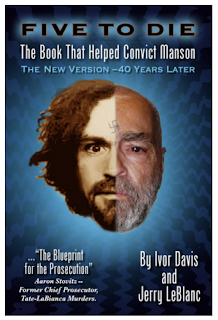 The updated 2009 edition of Five to Die. (Is it a coincidence that its
publishing company was located in Ventura, California?)

Ventura was an apt venue for Davis' talk since Ventura County is where the famous mug shot of Charles Manson that was taken on April 22, 1968 after he was arrested on suspicion of grand theft auto when the bus he was driving got stuck in a ditch on a secluded road in the eastern section of the county. As much as anything that mug shot encapsulates the popular perception of Manson as homicidal madman. "Just look at that picture!" Davis exclaimed to the shuddering crowd. (Other people just see a guy making a face for the camera.) 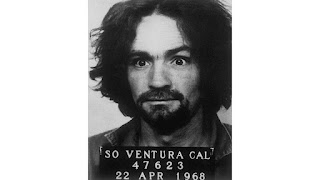 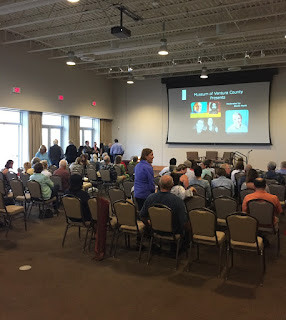 The audience begins to assemble in the events hall at the
Museum of Ventura County before the program.

The program at Ventura was pretty much a regurgitation of the 2009 edition of the book. Davis recounted the police investigation into the murders, taking particular delight in pointing out the ineptness of LAPD (e.g. a television news team found the killers' clothes, not the police, and Steve Weiss' father had to remind the department that his son had found the murder gun and that they already had it in their possession). This incompetence was greeted with laughter and snorts of disgust from the audience until a retired FBI agent stood up and reminded everybody that the police do, after all, make mistakes. Davis also laid into Vincent Bugliosi, mentioning both the DA's huge ego and his indictment for perjury. In fact, no one escaped Davis' critical eye (of course, everybody in "the Family" from Manson on down was treated with snarky disdain, and even the cooperative Paul Watkins was described as just a "wannabe musician") except for Aaron Stovitz, who was likely spared Davis' wrath because he credited the writer for solving the mystery of the Tate-LaBianca murders.

In addition to Davis, two other book authors appeared on the dais and lectured the audience about Manson, "the Family," and the murders. They were the father and daughter writing team of Mark J. and Aryn Z. Philips. The Philipses cowrote Trials of the Century, a compendium of the most sensational murder trials of the 20th Century, one from each decade (Harry Thaw, Mary Phagan/Leo Frank, Roscoe "Fatty" Arbuckle; Richard Hauptmann, Wayne Lonergan, Sam Sheppard, Richard Speck, CM, Jean Harris, and O.J. Simpson). 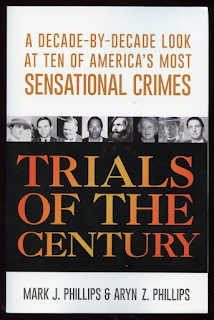 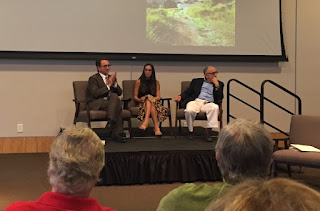 Mark and Aryn Phillips and Ivor Davis on stage

The Philipses' presentation was, to be polite, really, really bad, and quick reading of the source notes for their book chapter on the Manson trial reveals why: most of their information was gleaned from Helter Skelter. (Another oft-quoted source was the book The Trial of Charles Manson, by Bradley Steffens and Craig L. Staples. I was unfamiliar with this book so I got a copy. This slim -- 112 pages including notes and index -- volume is part of the Lucent Books series of "quality nonfiction for libraries and classrooms." Lucent has a series of books called "The Famous Trials Series" which includes other famous criminal and legal cases such as the Dred Scott Decision, the impeachment of Bill Clinton, the Nuremberg Trials, the Rosenberg espionage case, the trial of Adolf Eichmann, the Pentagon Papers, Roe v. Wade, and the Salem Witch Trials. Sources used for Trial include most of the better known TLB books and periodicals. The main recommended Internet source was www.mansonmurders.com, an URL that will surely invoke a nostalgic cringe in longtime students of the case.) 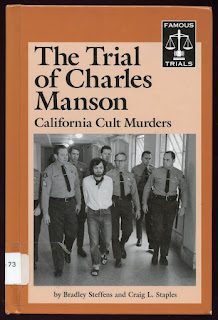 The audience of about two hundred, which consisted of mostly well-to-do older white folks, took it all in. Even the few longhairs in attendance seemed to go for everything. I quickly gave up on any attempt to reply to the onslaught of lies (although I did loudly say "He is not." after the moderator exclaimed, "First of all, Charles Manson is only 5 foot 2 inches tall!") as I was quickly overwhelmed by the avalanche of misinformation coming from the stage. The moderator had requested that all questions and comments be held off until the presentation was over. By then I knew that the audience was a lost and dangerous cause. (If I had asked a question it would have been "If you thought everything you heard from Watkins, Poston, and Flynn was unbelievable, why did you believe it?")

But after the event I was compelled approach the lawyer and his daughter with my evaluation of their presentation. After identifying myself and laying out my background (the lawyer noticeably started when I told him that I had visited Manson in prison almost two hundred times) I told them that their whole spiel was "so wrong" and misinformed that they had no business pontificating about the case. The daughter was visibly taken aback. Her father defended the book as being intentionally superficial re the specific cases, but I said that if that was the case they shouldn't pass off their superficial knowledge of the Manson case as if they were any kind of authority. We exchanged books and they seemed very glad when I left. (Before the event I introduced myself to Ivor Davis as a decades-long student of the case and told him that I was glad to meet one of the authors of one of the first books about the case as I had written a book about the case myself. He wrote down the title of my book and said he'd check it out.)

In addition to the Ivor Davis event, Manson and "the Family" were featured in an ongoing museum gallery exhibit dedicated to "Really Awful People" who included Nero, Attilla the Hun, Vlad Tepes, Gilles de Rais, Torquemada, Ivan the Terrible, Jack the Ripper, Joseph Stalin, Adolf Hitler, and…. Vladimir Putin? (Okay, I know that in progressive Ventura they probably believe that Vladimir Putin helped Donald Trump win the election for president of the United States, but does that really warrant his being presented alongside two figures who were responsible for the murders of tens of millions of human beings?) 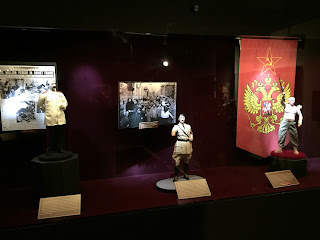 The Manson exhibit consisted of a large black panel decorated with a sparse description of the case, some photos of Manson, Spahn's Ranch, and Sharon Tate, and a blurb tying Davis and Five to Die in with the whole thing. 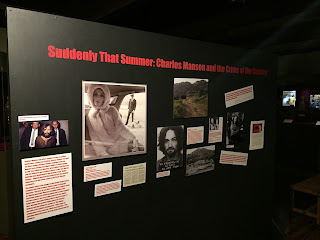 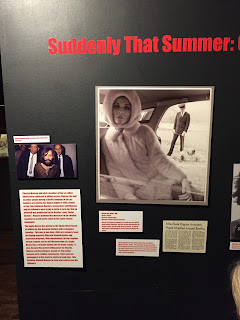 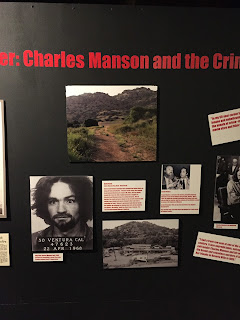 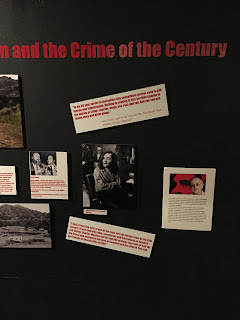 Five To Die is an interesting period piece, but it is also a sensational example of the worst of British tabloid "news." Its "unbelievable story" is literally just that. But what's even more unbelievable is that after almost fifty years the public still eagerly laps this garbage up.