We all know about the two well publicized assassination attempts on President Ford's life in September 1975.  Squeaky Fromme and Sara Jane Moore made national headlines for months, then and in the intervening years.  Did you know that there were two other assassination scares for Ford that month?  I am not certain what prompted all of these attempted attacks on Ford, the Vietnam war had been declared over in April 1975.

Squeaky's arrest on September 5, 1975 kicked off the public's knowledge of the attempts.  Fromme was duly tried, convicted and sentenced to life in prison.  She was granted parole July 2008 but had to serve a little extra time for her 1987 prison escape.  On August 14, 2009 she was released on parole. 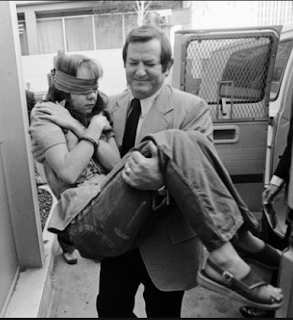 Coincidently there had been another assassination planned on the very same day as Squeaky's attempt.  Gary Steven DeSure, 32, and Preston Michael Mayo, 24, were arrested Aug. 26, 1975 in Santa Barbara CA for stealing a television from a motel.  The day after that arrest DeSure told investigating officers about the assassination plot.  DeSure was an escaped patient from a Warm Springs MT mental hospital.  He had been committed there due to threats made against the President during a court appearance for forgery and credit card theft the previous year.

DeSure and Mayo's plans were to place a bomb in the sewer system near where the President was to speak.  When the bomb went off and every one was distracted Mayo would fire the kill shot at the President.  On March 1, 1976 DeSure and Mayo were sentenced in federal court.  DeSure was given a five year sentence and a recommendation of psychiatric help.  Mayo was given a six year sentence to be served at the federal prison in Lompoc CA. 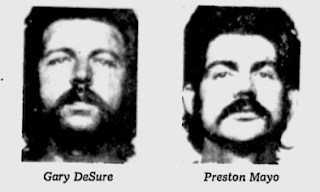 On September 22, 1975 along came Sara Jane Moore, who in front of the St.Francis Hotel in San Francisco actually fired off a shot at President Ford.  She, too, was duly tried, convicted and sentenced to life in prison.  Like Squeaky, Sara also chalked up one prison escape.  Sara and another woman, Marlene Martino, escaped from Alderson Federal Prison the evening of February 5, 1979.  They were captured while hitchhiking a few hours after the escape. 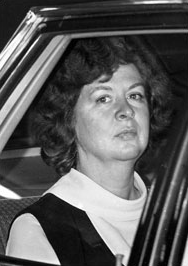 The assassination attempt of DeSure and Mayo did merit a couple of newspaper stories and it's probably not entirely foreign to the hard core Manson researchers.   This next story, however, did not generate any newspaper stories that I could find.  I was looking through declassified documents at the National Archives website when I found it.
This document says that the release of Charles Manson from prison was the purpose for the assassination of not only Ford but also Emperor Hirohito who, along with his wife, was visiting in the United States and scheduled to attend a state dinner with President and Mrs. Ford on October 2, 1975.  The information was gathered by Canadian authorities on September 30, 1975 and disseminated to US authorities the next day. 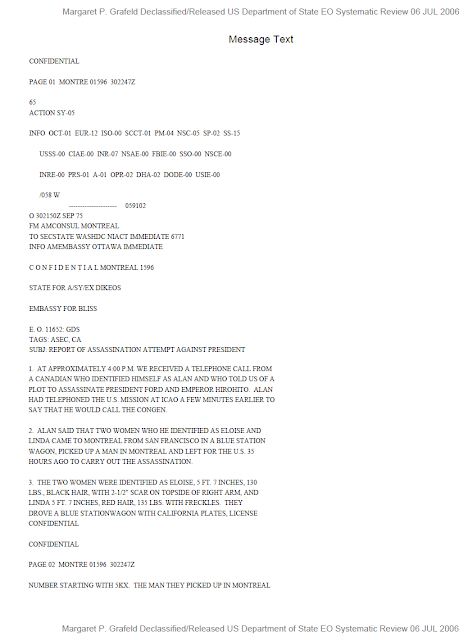