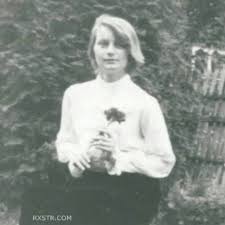 Was PTSD a factor in Mary Brunner's bizarre courtroom behavior?
Empathy comes a bit easier when I see people as kids. I always search for everyone's youngest photograph online before doing anything else. Wondering wtf happened in Cali and staring at the photo is the next step. For many of these folks, I never move beyond the wondering stage. Everything is just so crazy. And some of the explanations seem crazier.
The last month or so, I've been working on a Mary Brunner timeline. Mary's performances across courtrooms from trial to retrial to trial etc shocked me to say the least. I wondered if I could follow her personal arc through literature and official documents and arrive at some place that made sense.
Additionally, my cousin and I made family trees for Mary's Brunner (paternal) and Baker (maternal) families. Mary's DNA profile is consistent with the white European population of the Upper Midwest in the decades surrounding the start of the twentieth century. Wonder Bread before Wonder Bread. I found a black and white photo of Mary's dad doing a handstand. Total research career highlight. The champ is here.
Anyway. Mary intro via Fromme. 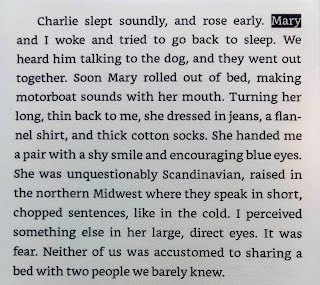 Babes in the woods. Summer 1967. Burton Katz said Mary was "well on her way to a Master's Degree" but I can't find a confirming source. Mary is twenty-three and the right age to be a grad student but many accounts have her moving to California in 1965 after graduating from Wisconsin. Graduate students aren't typically library assistants either. That is more of an undergrad thing.
Our traditional introduction to Mary is at the Berkeley gate where Charlie is strumming a guitar and Mary's dog Muffin runs up yip yip blah blah blah, "Woman! I'm gonna kick your dog!
"You better not!"
I prefer Emmons for this scene but to each their own. Let's set the dune buggy time machine for mid-April, 1968. Law Enforcement  arrives late night in Ventura County at the scene of a bus wedged into a deep drainage ditch. Beside the bus that is assumed stolen but not yet verified, a group of fifteen-ish hippies are asleep naked on the ground. Among them is Mary Brunner and baby Pooh Bear.
Charlie stole the bus in San Francisco nine days earlier on April 12th. Kind of romantic in a Hollywood movie way but not when you get locked up for it in real life. And then of course since the gang is the gang, they crashed their stolen bus into a ditch. Somehow, no one was injured. A celebratory bonfire and weird group unclothing followed.
I pictured the first policeman on the scene, a Vietnam vet or something like that, shining his light on their pale bodies and thinking everyone was dead. The scene likely resembled something straight out of Roswell. If you're unaware of what happens next, Charlie is arrested for the stolen bus and having two driver's licenses. Other nude people also receive false identification charges. Yeller and Brenda are charged with disorderly conduct. I imagined them fighting the police naked in slow motion while Japanese girl group surf rock blasts.
Mary gets busted for her underdressed and shivering baby sleeping beside her. No charges are filed against Charlie over Pooh Bear even though the infant is half his responsibility. Oh how times have changed.
Knuckleheads pops into my head a lot when I think about these kids and Charlie in their early days. He was older but at a similar maturity level. Charlie lost his mom for several years at the age of five over the The Great Heinz Bottle Stickup of '39, fell into the care of Glenna, toothless Bill, Uncle Jess Kaboom, and finally the clink at age thirteen.
Ohio River payback cake from an Easy Bake Oven is the order of the day but not yet. Here is the first time tiny Gen X'er Pooh Bear, later named head of the Manson Family by Clem Grogan, is taken into custody. While a social worker will later tell Mendocino investigators this arrest was little more than police harassment of hippies, Mary is now on paper. She receives a suspended sentence, two years probation, collects her baby, and promises to return to Wisconsin where she belongs.
Which is slippie code for Mendocino. Here are a few highlights contributed by an anonymous friend. 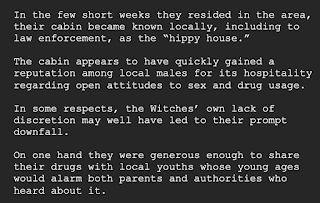 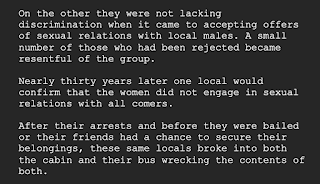 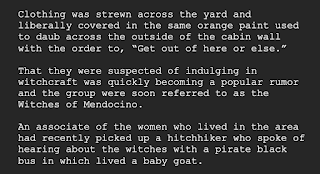 (I want to feed that cute baby goat and raise it at my house!)
You remember little Allen's snake legs and all that plus how the other boys tore the place up. Everyone arrested or questioned at the scene except Mary gives a fake name. Mary rented the cabin using her real name and knows she's doomed. The gang admits to the LSD and some pot seeds and help the police find the drugs in either the woods behind the cabin or a shed in the woods behind the cabin. Mary takes the fall.
Pooh Bear is sheltered and cared for in the home of Dr. Roger Smith upon Charlie's request. My opinions are whispers in the wind of course but I think Smith got a raw deal in O'Neill.
More germane to this discussion is what was Mary's state of mind at this time? My quest was how does a person go from taking their flute out to California with them to their library job to sitting naked with Kenneth Como or even the machine gun photos. How did she get there? When did the changes occur?
All of this is from cielodrive.com. Thank you, Mr. Bo.

Mary could be playing the game because she wants her baby returned but she's not displaying any red flags. 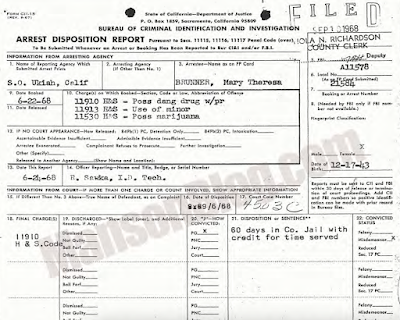 This far into it, do you think Mary is cracking under the pressure or displaying any overt revolutionary tendencies? She seems like she's holding up okay to me. The gang is still getting arrested for stupid things and maybe nothing feels real but Mary is playing a game with inescapable consequences.
George and Elsie Brunner surely begged Mary with genuine fear in their voices to return home. But Mary loved her baby's father like many girls love their baby's father and ignored her parents. Everyone always talks about cult this and mind-controlled that and while they might be right, I just don't know for sure. What if it was a simple perfect storm type of situation and the train came off the tracks in the worst ways?
Viewing Mary as a girl who wanted to live with her friends and child's father more than returning to her parents and their I-told-you-so's resonates with me. And if neither option was ideal, Mary was stuck somewhat like the stolen bus in the ditch with nowhere else to go and that's a different issue.
Which brings us to Gary's. 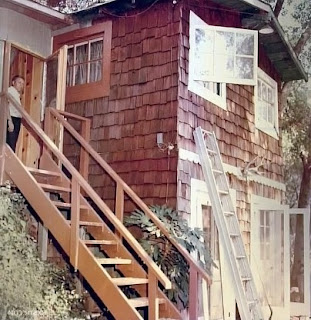 That photo triggers me every time and I wasn't there. How many times do you think Bobby viewed it online over the years and wished he'd never taken that ride? I wonder if Mary ever looked into all of this? I bet she'd do anything to go back in time and keep everyone from walking up those stairs.
Bobby, do you read these?
It's impossible to gloss over what happened at Gary's or write an apologetic piece. Gary's life became a nightmare until he ceased to exist over the course of a gruesome weekend in July 1969. Bobby lured Mary into going to Gary's because they were friends and Mary would put Gary at ease. Mary to her great detriment is unable to keep from admitting to things she's done wrong. Because of that, we know she told Guenther and Whitely that Bobby informed her of the robbery about to take place at Gary's during the drive there.
Her first version of events places the amount they sought at Gary's at three grand btw.
Mary said she thought nothing of Bobby's comments because she knew Gary had no money. Evil Bruce McGregor Davis dropped them off and scurried away into the darkness like a rat. Sadie gave the signal once the coast was clear. Mary stood inside like a foolish girl from Wisconsin until there was no chance to leave.
Guenther and Whitely also found out from Mary that Bobby shared with her his decision to kill Gary. Put yourself in Mary's shoes. What could she have done? Die with Gary? She must've been terrified. I'd never recover from that hellish scene.
We all know Gary's ending. Mary and Sadie took turns smothering his death rattle after Bobby told them to do it. There's no escaping what they did. Awful isn't a strong enough word.
Over the next week and some as July works into August, we don't hear much from Mary until what Dreath dubbed The Sears Caper. 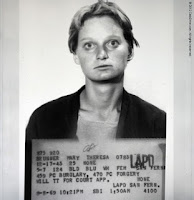 Mary looks scared. She's thinking her goose is cooked. And has a thousand yard stare. Here's a scholarly article on the relationship between witnesses to violent crimes and PTSD. Google is filled with many others. Mary fits the profile every time.
Eventually, Kitty from the sidewalk tries to nuke Mary in court by saying she witnessed Mary driving Gary's vehicle after his death but she is too late. Guenther and Whitely have already talked Mary into cutting a deal. Texas high hurdles state record holder (4A) Tex Watson later writes that Mary would have been at Cielo if she wasn't in jail.
When I'd see that Tex quote in the past I always thought yeah right whatever weirdo man. Anymore, I'm not so sure. If the story about Tex retrieving Pooh Bear from Dr. Smith's house in Melcher's car is true, maybe Tex and Mary were close. Whatever the case, Mary and Sandy were unavailable the night of Cielo after bungling a simple retail hustle. And I'm happy about it.
Somewhere between Gary's murder and the Twinkie truck accident, Mary's brain changes. Clear evidence exists. She becomes agitated and emotional every time we see her in the public record afterward. The first Wisconsin interview. Her affidavit. Court.
Mary should be forever grateful to Judge Keene. I wonder if she ever watched him on Divorce Court? Boring program but on right after school in my day. Countless peanut butter sandwiches were consumed while actors in their forties who looked old to me pretended to divorce one another.
In the coming year, I'd like begin a discussion on Mary's court appearances after the Hinman murder. At one point, Mary tries to die for or alongside Bobby before Judge Keene steps in and saves her life. She is safe for awhile but more astonishing blunders are coming.
Something is wrong with Mary. No one gives a shit because she suffocated Gary and has a baby with the boogeyman but by Christmas of 1969 the time bomb is activated and ticking. An appointment on the wrong side of these bullet holes awaits Mary at the semi-conclusion of her antics out west. +ggw 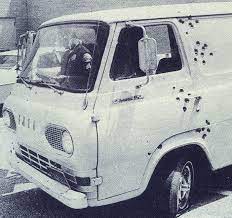