The Manson Family on Film and Television’ (2018) 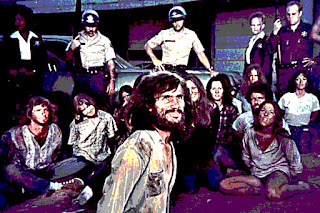 Closing in on nearly fifty years after the event, the dark enigma of Charles Manson (1934 – 2017) and the horror that was the Tate-LaBianca murders continue to fascinate and haunt us in a way that very few crimes before or since have. Over the nights of August the 8th and 9th, 1969, Manson managed to reach out and terrify the world by sending a selection of his acid-fuelled young (and mostly female) followers on a murderous rampage through Los Angeles, a spree that would ultimately leave seven people dead, including a pregnant Sharon Tate, the 26-year-old actress wife of film director Roman Polanski (who may very well have ended up among the victims, had he not been over in the UK at the time). Of course, the combined death toll attributed to Manson and his Family was much higher than seven, and included musician Gary Hinman, lawyer Ronald Hughes, Spahn Movie Ranch hand and Hollywood stuntman Donald "Shorty" Shea, and possibly many others.

I have long held a strange fascination with the Manson case, as I also have with the November 22nd, 1963 assassination of President John F. Kennedy in Dallas, two crimes which bookended the decade of the pop-sixties, a contradictory one played up as a time of ‘peace and love’, yet seeing record increases in racial violence, psychopathy and random acts of senseless killing. Not to mention a pointless war in South East Asia that was being played out nightly on television sets across American living rooms. The Tate-LaBianca killings, along with the stabbing murder of black concertgoer Meredith Hunter by the Hells Angels at the Altamont rock festival in San Francisco on December 6th, 1969, brought the decade to a screaming halt.

My own first exposure to Manson was, appropriately enough, a cinematic one. I was only five years old at the time the events took place, so while I may have heard his name being mentioned on the news or by older family members, my first conscious introduction to Charles Manson was the screening of the two-part telemovie Helter Skelter (1976/USA), which I first saw at the age of thirteen, probably the perfect age for the film and its story to have maximum impact on my impressionable mind. In the lead-up to the broadcast, I started learning a few things about Manson and the murders, from TV reports and newspaper articles hyping the mini-series, as well as from exaggerated and misinformed schoolyard chatter.

But you didn’t need to exaggerate anything in this case – the crime and the facts surrounding it, not to mention the news footage and images of Manson and his perpetrators, spoke for themselves. So by the time Helter Skelter aired in Australia, I was primed and already terrified out of my wits by the story. After the first part of the telemovie had aired, which was highlighted by a galvanising performance by Steve Railsback as Charles Manson, I slept with the bedroom door opened and the hallway light turned on, for the first time in years. Of course, I couldn’t wait for the second part to air the following night. 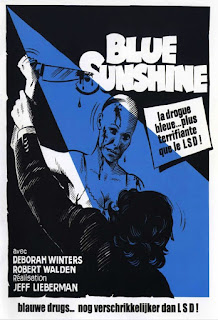 Written by Germany-based screenwriter and author Ian Cooper, The Manson Family on Film and Television (McFarland, 2019, 213 pages) is a much-welcome book-length examination of the films, television shows and TV movies which were either based on or inspired/influenced by the Manson killings and the fear and hysteria which they generated. While Helter Skelter may be one of the better and more widely-publicised adaptations of the case (it was based on the famous best-selling book by prosecutor Vincent Bugliosi and Curt Gentry), it was certainly not the first. The sensationalism and cocktail of lurid ingredients which surrounded the Manson murders provided the perfect fodder for exploitation filmmakers. They were quick to capitalise on the tragedy. Existing films were hastily retitled and rushed into cinemas and drive-ins with suitably tasteless advertising campaigns, such as Robert Thom's Angel, Angel, Down We Go (1959), which reappeared post-Manson as Cult of the Damned, while cameras started rolling on new films while the newspaper ink was still wet.

Two of the earliest cinematic exploitations of the Manson killings were Frank Howard's The Other Side of Madness (1971) and The Manson Massacre (1971). The former is an interesting and effectively surreal, almost arty black & white gem that utilizes some of Charlie's original music and was partially filmed at the infamous Spahn Ranch, the old western movie location which the Manson Family used as a hideout and sanctuary. The Other Side of Madness was later re-released as The Helter Skelter Murders which is the title it remains best known under. Little is known about Kentucky Jones, the mysterious name credited as director on The Manson Massacre (aka The Cult), a film which was presumed lost for many years until a German-dubbed print was discovered in the early 2000s.


Cooper puts forth the belief that Kentucky Jones was a pseudonym for the notorious sexploitation filmmaker Roberta Findlay, though other rumours have invariably suggested the film was directed by Lee Frost, veteran Albert Zugsmith and even members of the Manson Family itself (the later highly unlikely but makes for a good urban myth). The Manson Massacre is a quintessential piece of early-70s' scuzz, dripping with sleaze and jam-packed with topless hippie chicks and psychedelia-drenched violence. 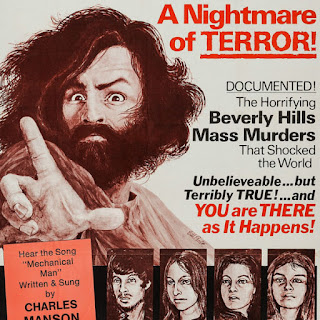 The author has an interesting take on some of the films that are discussed in The Manson Family on Film and Television, such as Tobe Hooper's seminal masterwork The Texas Chainsaw Massacre (1974), which Cooper asserts is like a reverse Manson, in which the young band of hippies are the ones who are terrorized and slaughtered at the hands of a demented (and literal) family of killers who are shunned and separated from society. Another example is Francis Ford Coppola's Apocalypse Now (1978), in which the Colonel Kurtz character (played by Marlon Brando) is cast as the Manson figure, a dropout from his own military society who has lost his mind and is lording over his  "family" of natives and army deserters deep in the jungles of Vietnam.

Cooper also includes some of the many documentaries and true crime TV shows and interviews that have been devoted to Manson over the years. The highlight of which would still have to be the devastating and Oscar-nominated Manson (1973), along with many of the low-budget horror flicks that gave off a clear Manson vibe like David Durston's incredibly sleazy I Drink Your Blood (1970), the Robert Quarry vampire vehicle The Deathmaster (1972), and Wes Craven's The Hills Have Eyes (1977).

It's also great to see Cooper touch on Jeff Lieberman's classic psychedelic psycho-shocker Blue Sunshine (1977), which centres on a group of young adults who, as experimental counter-culture college students a decade earlier, took a batch of bad acid which is now catching-up with them, causing them to lose their hair and descend into murderous psychosis.

The theme of crazed killers on a bum trip, along with the visual of bald young women with craziness in their eyes, certainly brings forth some Manson-esque connotations. When I interviewed writer/director Lieberman about it a couple of years ago, he told me that he had no thought of Manson during the film's conception and production. Still, it's a perfect example of how Manson managed to permeate the subconscious, if not in the filmmaker then in the viewer.

Episodic television shows, which featured Manson-esque characters and situations, are not ignored in Cooper's book, either. Along with the recent David Duchovny-led series Aquarius (2015 – 2016), Cooper covers classic TV shows which riffed on Manson, like "A Coven of Killers," a 1975 episode of the American cop series S.W.A.T., which guest-starred Sal Mineo as the cult-like leader of a group of alienated youths out to exact revenge against the people who put him behind bars. Tragically, Mineo himself was viciously murdered not long after this episode aired, stabbed to death by a drifter named Lionel Ray Williams. One notable admission from the book, and one of my own favourite Manson-inspired TV episodes, is "Bloodbath" from the second (1976) season of Starsky & Hutch. Starsky (Paul Michael Glaser, who also directed), is kidnapped by the crazed followers of a cult leader named Simon Marcus, who blame Starsky for his imprisonment on a string of murder charges.

The Manson vibe of Simon Marcus, played by the memorably-named Aesop Aquarian, is clearly apparent not just in the influence which he wields over his young followers, but in his physical appearance, which includes long hair, a beard, and an upside-down cross engraved on his forehead (in place of Charlie's notorious swastika). With Quentin Tarantino's upcoming Once Upon a Time in Hollywood (2019) set to recapture the Manson hysteria and bring it back to our screens in time for the 50th anniversary of the events, it seems as if the public fascination with all things Helter Skelter is not about to dissipate anytime soon, making Ian Cooper's book a timely publication. Entertaining, knowledgeably-written and illustrated throughout with many B&W photos, poster art and ad mats, The Manson Family on Film and Television is a book that should appeal to both true crime and cult cinema fans and would look equally at home sitting on the bookshelf of either.