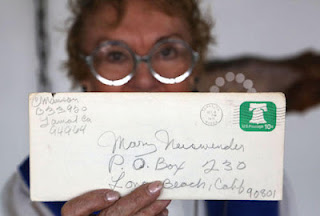 Mary Neiswender of The Long Beach Independent Press Telegram became the only reporter Manson would talk to throughout the 10-month-long trial that began in July 1970, giving her front-page stories and a first-hand glimpse into the mind of the notorious hippie cult leader.

"I told him I'm going to write the good and the bad about you, Charlie," Neiswender said. She described their relationship as a standoff. "I was in his face a lot," she said, but, "we laughed a lot."

They both had street smarts, Neiswender said, and both wanted something from the arrangement. "Through it all, I think we liked each other. I knew who and what he was and what he wanted. He probably knew the same about me."

When he was upset, he'd let her know through one of his many letters. In one 1970s letter addressed to her as "Woman Mary," Manson opened with, "If you had any kind of a brain ... "But other letters were friendly and included drawings of happy faces." I always did like you," he wrote.

Former Long Beach investigative reporter Mary Neiswender has just published her memoirs on all the trials and crimes she's covered through the 1960s and on, including Manson.