My Interface With The Manson Family, by Sue Marshall: Part 1 of 3

This series comes exclusively to Eviliz.com from Sue Marshall, a writer who lives in California. Sue will be monitoring the blog for the next few days to field your questions. 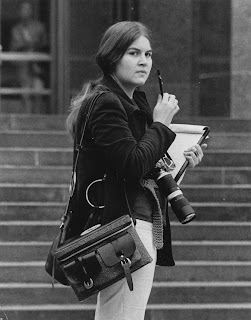 At the time the Manson Family perpetrated the Tate-LaBianca murders, I had just graduated from Santa Monica High School.  Shortly thereafter I began  writing on a freelance basis for the Los Angeles Free Press, a tabloid weekly that provided sensational coverage of the counterculture, to much acclaim.

In November 1969, I was hired by the Freep as a staff writer. I began to cover the antiwar movement. Later, I would be named "military editor." To my amazement, I was soon receiving a lot of mail from soldiers in Vietnam who would prefer to be anywhere else.  My journalistic focus inclined toward covering serious news about the peace movement, social justice, and women's liberation.

Around the same time, mid-October 1969, Manson and some of the Family members were arrested at the Barker Ranch in the Panamint Mountains, now within the boundaries of Death Valley National Park.  Charges filed included auto theft and arson. It took the police authorities a few weeks to figure out who to arrest for the Tate-LaBianca murders, as well as those of Gary Hinman and Shorty Shea.

Coincidentally, I was acquainted with Manson Family victim Gary Hinman.

In the spring of 1968, as a high school junior, I met a young man named Gabriel, a musician, who recruited me to come to a Buddhist meeting. Thus I discovered the Pacific Palisades chapter of the Nicherin Shoshu Sokagakki, the Buddhist cult that chants "Nam Myho Renge Kyo" and conducts a vigorous proselytization effort. Being curious, bored, and interested in meeting young men, I joined up.

In August 1968, the sect held a convention in Honolulu. Seizing this  opportunity to have a little adventure, I had saved my earnings from a summer job and flew to Hawaii with the group.  There I met Gary Hinman.

Hinman seemed much older and wiser than the rest of us. He must have been in his early 30's. He was not very tall, of thin build, with straight brown hair of medium length and a brown beard.  He smiled and did not talk much.  He wrote his address and phone number in my little red book.  I could have gone to visit him at his house in Topanga Canyon, later to be the scene of his demise.  But I never called him. Could Gary's open and welcoming nature have eased the way for Manson and his followers to have access to him?  I suspect so.


A Visit from Sandy Good, Squeaky Lyn, and Gypsy

By December 1969, the police had arrested most or all of the Manson Family members who had been involved in the string of murders.  I was still very new in my job as a reporter when the Freep office was visited by a trio who would later become infamous in their own right.

At that time, the Free Press office was located on the north side of Beverly Boulevard, one block east of La Brea, across from CBS Television City. Because of earlier bomb threats from anti-Castro Cubans, the door between the lobby and the offices was controlled with an electric latch.  Before anyone could enter, receptionist Dee would have to buzz them in.

It was in this dim lobby, with bright sunbeams filtering through the glass door, that Sandy Good, "Squeaky" Lynette Fromme, and "Gypsy" (Catherine Share) introduced themselves to me and my neighbor, Michael.  They were carrying a stack of vinyl records: Charlie Manson's original songs performed by the Family, with Gypsy playing acoustic guitar.  The appearance of the cover art made it obvious that this was not a product of the slick record companies.  It was a blurry black-and-white version of the Life magazine cover photo of Manson with his trademark stare. The only title, in block letters, was the word "LIE," in an attempt to mimic the magazine logo.

My neighbor Michael immediately produced the five dollars that the young women were asking for their record.  If I had bought one from them then, it would be probably worth ten thousand dollars today.  But I probably didn't have five dollars in my pocket, and the Manson Family trio were activating my weirdness radar.

Soon we were joined by managing editor Paul and advertising administrator Shirley. They were very intrigued by our visitors.


We listened to the spiel:

Charlie, they said, had been targeted by the LAPD because he was having a good time with his Family.  He never did anything criminal, they said.  Everyone was innocent.  It was Us versus the Man. The Pigs were scapegoating hippies because they needed to solve these murders.

All this sounded plausible.  We made an appointment to meet the Family at their stronghold.