Some time ago when Farflung sent Eviliz.com a copy of the Stockton Murders police report, Patty filed away in her mental cabinet some ideas for future posts. Through the magic of Google Earth, she did not have to actually drive from Ballarat to Stockton to show you how close together the West Flora Street house, the liquor store that Goucher and Monfort robbed on 10/30/72, and the liquor store where Squeaky was arrested after calling West Flora to be picked up on 11/12/72 actually are: The scale of the above map indicates that all three places are within a mile of one another, marker "C" being the West Flora house (you have seen it before, so no photo). Marker "A" is where the Eden Square Liquor Store used to be located at 929 North El Dorado. Monfort and Goucher were apprehended for robbing it, and as you know Monfort was using James Willett's ID which tied them to Willett's murder some weeks earlier near Guerneville. Today it appears to be a church or a worship center of some kind: 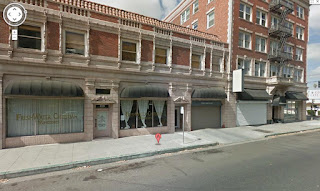 Most puzzling to Patty is marker "B", the B&E Liquor store at 939 North Yosemite Street, which is still there today. As you can see in the first image above, B&E is a mere five blocks from the West Flora Street house. Why did Lynette need a ride, then? And why did she tell someone whom she did not know (i.e., "Earl" the police officer) where to find her? 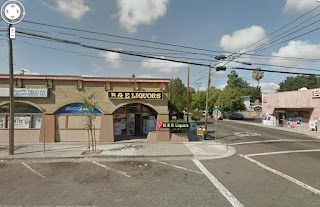 Devil in the Details. They play no games.

…One of Nicky Minaj’s widely mass media cerebrated alter MPD personalities is ROMAN ZOLANSKI.  It is actually ABC’s  The View-Whoopi Goldberg’s friend and her former boyfriend’s Satanic Mentor,  ROMAN POLANSKIi, the Devil in the Details. They play no games...

…Orange Sunshine was primarily manufactured and distributed by a group known as “The Brotherhood of Eternal Love” who operated out of a beach resort near Los Angeles. One of the Brotherhood’s major drug manufacturers and dealers was Ronald Hadley Stark of New York. The Brotherhood was controlled by Ronald Stark, whom an Italian High Court concluded had been a CIA agent since 1960. The Brotherhood’s funds were channeled through Castle Bank in the Bahamas, a known CIA “proprietary.”  Stark had been secretly attached to a CIA project later to be revealed as MK ULTRA….

…The Polanski Satanic Cult, Manson Family and the Sharon Tate sacrifices were secret projects of the Lookout Mountain Laboratory. For decades, the mountains and canyons, particularly Laurel Canyon, overlooking Hollywood hid a lot of things even outlaws of Wild-Wild West and racialist “White Knights” to a complete $4 million pre WWII Nazi Compound and Fort.[41] Hidden in a valley in Laurel Canyon on Wonderland Park Avenue during the 1960s was a Top-Secret U.S. Military propaganda machine, Lookup Mountain Laboratory…