Below: from flashbackbooks.com, a Canadian mail order book store run by Michael Horowitz, hippie/beat author and close friend of Timothy Leary (he is on the board of The Timothy Leary Archives).

The title alone of this religious tract tickles Patty's funny bone. How could anyone logically come up with this combination of things? The 1960's American Religious Right, that's who: 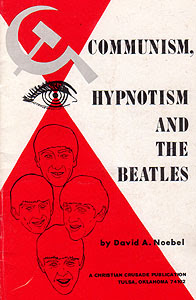 "Communism, Hypnotism and The Beatles are all instruments of (...wait for it...) THE DEVIL. Evil incarnate! Satan! Lucifer! Beelzebub! The Beast! There are subliminal messages in rock music, especially in the music of the Beatles. Play this one backwards...hear it? "Paul is dead! Paul is dead!" With their atrocious long hair, loose morals and hidden messages, the Beatles are turning God fearing clean cut American youth into Godless communists! It's true: they do it with mind control. And once our best and brightest minds have been taken over, who knows what Satan might bid them do? One moment our children are homecoming queens, football players, All-American types fixing meatloaf for the church potluck, and the next thing you know, they are eating garbage with their hands. Communally! Like communists! And even worse, the garbage will be...gasp...VEGETARIAN."

Mr. Noebel's manifesto was no longer available through Flashback, so Patty purchased copies of the 1972 and 1974 Senate Hearings on the Marijuana and Hashish Epidemic instead. And while there was nothing too compelling in them relating to our topic of study, Patty was interested to learn that the BEL was heavily involved in a passport fraud operation in order to mask their comings and goings abroad. This, the hearings read, was confirmed by Interpol, who once investigated Bruce Davis' undocumented presence in London on at least one occasion (that slippery little git).

Michael is a very nice man and he will do you right. We chatted a bit over email, and he sent me in the mail, free of charge, these photocopies of some rare BEL ephemera. Apparently, these cards were the ones that Orange Sunshine was distributed on at free concerts and gatherings. COOL SHIT. Thanks, Michael. You are positively lovely. 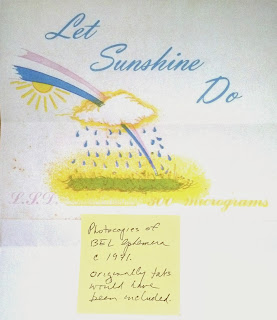