Hey, Brad and Leo: This Tarantino Movie on Sharon Tate’s Murder Is a Terrible Idea 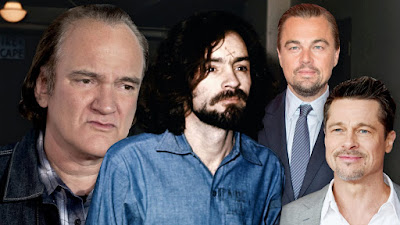 Pitt and DiCaprio have reportedly signed on to Tarantino’s upcoming Manson Family murders film—after he defended Roman Polanski and was accused of endangering his leading lady.
Amy Zimmerman The Daily Beast

Two of Hollywood's biggest stars are now officially on board for one of its worst-sounding, most ill-fated projects: Quentin Tarantino's take on the Manson Family's murder of Sharon Tate, which will reportedly also focus on Roman Polanski.

Once Upon a Time in Hollywood, which is slated to be released on August 9, 2019, the 50th anniversary of Tate's killing, is the director's ode to 1969 L.A. But it's coming on the cusp of a new era—one in which a movie like this one would never get made or, at the very least, wouldn't be fueled by the star power of a melancholy, middle-aged heartthrob and a former Pussy Posse ringleader. On Thursday, it was announced that Brad Pitt and Leonardo DiCaprio would be joining forces for the upcoming Tarantino flick, starring as a pair of struggling actors who just happen to live next door to Tate (rumored to be played by Margot Robbie).

Tarantino says that he's been working on the script for five years, and it sounds like a project that would have gone over really well in 2013. Back then, a director who managed to narrowly secure some feminist credentials on the strength of his female leads' performances wouldn't elicit such side-eye with his plans to filter Sharon Tate's brutal murder through the experiences of two random dudes. Five years ago, Tarantino fans could gush over his films more or less unaware of the allegedly poor treatment he's inflicted on his heroines—women who he's reportedly bitten, choked, and put in life-threatening positions, all for the sake of a shot or a scene.

"Look…she was down with this."
— Quentin Tarantino on Polanski's 13-Year-Old Victim


But unfortunately for Pitt and DiCaprio, who either aren't paying attention or are just too untouchable to care, #MeToo has turned this project almost laughably toxic.

Last month, a recording of Tarantino defending Roman Polanski to Howard Stern started making the internet rounds. In the vile 2003 interview, Tarantino insisted that Polanski "didn't rape a 13-year-old," continuing, "It was statutory rape... he had sex with a minor. That's not rape. To me, when you use the word rape, you're talking about violent, throwing them down—it's like one of the most violent crimes in the world. You can't throw the word ‘rape' around. It's like throwing the word ‘racist' around. It doesn't apply to everything people use it for."

The director posited that, "She wanted to have it and dated the guy." While Stern pushed back, recalling that Polanski allegedly gave his 13-year-old victim "booze and pills" before the assault, Tarantino countered, "Look…she was down with this."


While this audio has existed since 2003, a newfound interest in holding powerful men accountable has unearthed new pieces of the Tarantino puzzle. Tarantino is just one of many A-listers who have gone out of their way to stand up for Polanski, who has been accused of sexually assaulting multiple teenagers—a reminder of the boys-club-without-consequences culture that we're trying so hard to move away from. In a 2009 op-ed in The Independent, Harvey Weinstein launched a full-throated defense of the director, and recalled bringing Tarantino with him to "to a very private screening of the documentary Roman Polanski: Wanted and Desired, which shows some of the legal irregularities of his case." The Weinstein Company ended up buying the international distributing rights to that documentary.

It's unfortunately not shocking that Tarantino, a longtime Weinstein Company collaborator who admitted to knowing "enough to do more than I did" about the ousted producer's alleged serial sexual harassment and assault, publicly defended a convicted child rapist. Complicity isn't the same thing as being a perpetrator, but it does create an environment in which abuses of power can continue unabated. A man who continues to work with someone who attacked both his ex-girlfriend and his female co-worker, as Tarantino did in the case of Weinstein, Mira Sorvino and Uma Thurman, is an important cog in a vile system. A man who will publicly protect another male auteur by insisting that his 13-year-old victim "was down" shouldn't be trusted to direct the killing and torturing of women onscreen, even under the guise of female empowerment.


Of course, because the world is a dark place and meaningful change is always just out of reach, Quentin Tarantino, the "feminist" male director who said that statutory rape isn't real rape, is making good on his long-awaited Manson Family murders movie—a story about horrific violence against men and women which, inexplicably and enragingly, will reportedly feature Roman Polanski in a "key role." Will Tarantino be smart enough to cut Polanski out, given the recent controversy? Or is he betting that, since the past few months haven't limited his star power/ability to do whatever the hell he wants, nothing will?

If an actress like Margot Robbie still wants to work with Quentin Tarantino, with full cognizance of the ways in which he has injured and failed to protect his female stars in the past, that's ultimately her call. What's more disturbing is the A-list men who are choosing to hitch their wagons to Tarantino's star, under the unstated assumption that the director's time is not—and will never be—up. Presumably unafraid on a personal level of Tarantino pressuring them into a stunt or failing to protect them from a rapist producer, Pitt and DiCaprio's decision ultimately would have come down to whether the bad look of working with a complicit, borderline abusive dude in at the age of #MeToo outweighed the opportunity.

Apparently, the chance to play a washed-up actor who lives next to Sharon Tate was too good to pass up—more evidence, as if we needed it, that male stars will be "allies" only to the extent that they feel they have to. Brad Pitt and Leonardo DiCaprio don't need an ex-Weinstein Company Tarantino/Tate/Polanski movie paycheck, but they just couldn't be bothered to turn it down. If a ridiculously #MeToo-unfriendly project boasting Leo and Brad indicates one thing, it's a return to business as usual.