Not a review for "Once Upon a Time in Hollywood" 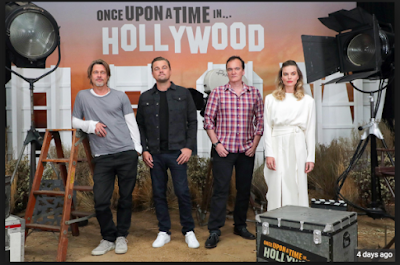 This is not a review for Once Upon a Time in Hollywood.  I didn't see the movie.  While my small town (population 452) has a movie theater we never get movies on opening day.  It might be a few weeks before I get to see it.  Frankly, I am rather exhausted by all the hype that has gone on for months.

Once Upon a Time in Hollywood was never intended to chronicle the so called Manson murders.  Instead  its intent was to capture a narrow time in the past, 1969, a nostalgia piece harking back to the Hollywood back lots of that time, so any comparison to the actual murders is moot.  The biggest draw for this movie is the fact that Quentin Tarantino conceived and directed it.

Despite all of the publicity which featured the casting info, ad nauseam, for Family members and victims if you go to this movie thinking it's a "Manson" movie, you are going to be sorely disappointed.  All that aside, just how well was it received and more important to Tarantino, what are the box office stats?

Once Upon a Time in Hollywood has turned out to be Tarantino's all-time biggest opening of any of his films.  In it's first three days, Thursday, Friday and Saturday, it grossed $41.3M and came in second for the week behind Disney's The Lion King, $76.M in its second week.

Exit polls, I guess exit polls are not limited to politics, who knew, say that 47% of people went to see the movie because of the director and 37% went to see it for the cast.  Both percentages are much higher than the norm of 7% and 18%, respectively.  It's good to be Quentin Tarantino.

Reviews of the movie have averaged out to lukewarm.


Frankly, I find the entire experience baffling, and any attempt to laugh off the Manson murders as sitcom fodder embarrassing.  Rex Reed

Though Tarantino mixes fiction and historical fact cleverly and confidently, I'm not sure what he wanted to achieve with the mix this time, and I'm not sure if he knew either. Ben Sachs

For those well-versed in the writer-director's work, it's a credible and intriguing addition to his filmography. Yet at 2 hours and 41 minutes, it also feels too leisurely in connecting its threads. Brian Lowry

As one might expect from Mr. Tarantino's previous films, his new one is violent as well as tender, plus terrifically funny. Yet this virtuoso piece of storytelling also offers intricate instruction on the pervasiveness of violence in popular culture.  Joe Morganstern

Meandering but deliberate, gorgeous and garrulous, it is very much the writer-director doing what he does so well, but in very familiar fashion. Which brings up the possibility that in making a movie about movie making, his real subject here is himself. Matthew Lickona

In-depth, character-driven, ultra-violent, over-long, and near-perfect... all the movie sins Tarantino has been criticized for over the years coming to a head in the most wondrous and cheer-worthy payoff any film fan could want. Kevin A Ranson

Shallow, meandering and tedious with only sporadic jolts of guilty pleasure fun and wit. Star power and charisma are not enough to keep the film afloat. Did its editor fall asleep in the editing room? Avi Offer

So, what say you, our readers?  Did you like it?