You Are Better Off Being Hitler 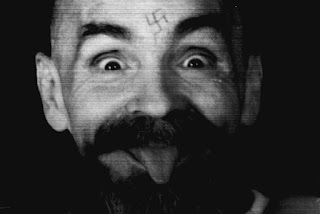 The Manson mythos has a long reach. Charles Manson is and remains the ‘bogeyman’ of our times
and has been so since 1970. Part of this aura exists because of the nature of the murders that occurred at Cielo Drive where victims fled calling for help and ‘witchy’ things were not simply printed on the door in blood but spoken to the victims. Part of it comes from the official motive and part from the instrument of murder- knives. But perhaps none of that would have remained in the collective psyche if it were not for the fact ‘Manson didn’t kill anyone’. Instead he convinced others, according to the official narrative to kill for him. They weren’t mob hit men or professional assassins or even psychopaths. They were early twenty-something girls.

Even though Watson did most of the killing what images appear with a google search of ‘Manson killers’? Aside from Manson, it is by far the girls. Like this one- a movie still.

The impact of ‘Manson’ was, perhaps, best illustrated by Dana Gilbert nearly forty years ago:
_____

At the trial Bugliosi invoked the image of Hitler to define Manson:
_____

“The Nazis murdered 6 million Jews at Adolph Hitler’s command.”
*****
“ I want to make an observation related to what I just said, one or more of you may say to yourselves—I don’t think any of you will—but the thought certainly may enter your mind that as wicked, as vicious, as these three defendants are, by comparison to Charles Manson, they are not as wicked and vicious as he is; therefore, let’s give Manson the death penalty and these three female defendants life imprisonment.

The only type of problem with that type of approach, ladies and gentlemen, is that these three female defendants are given credit, as it were, because of Manson’s extreme wickedness and viciousness. 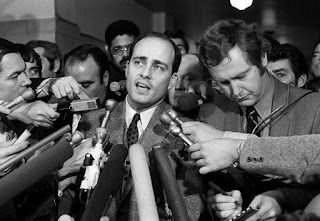 Part of what Bugliosi is trying to accomplish is precisely what he says: he doesn’t want the jury to compare the relative ‘evil’ of the defendants. He is also planting a seed: go ahead draw a comparison between Hitler and Manson. No one at counsel table objected.

In March 1971 Bugliosi invoked the name and memory of Hitler to sway the jury. But invoking the name ‘Charles Manson’ that’s another story altogether. If you are on trial I think you are better off being Hitler then Manson.
_____

Certainly don’t talk about yourself to friends in terms of Manson.

Defendant objected to these questions as irrelevant and immaterial. The court overruled the objections, stating that the questions did not ask who Charles Manson is or what he stands for, but rather called for testimony relating to defendant's statements characterizing himself as Charles Manson. [Aside: you are kidding me right? The jury didn’t know who Manson was?]

Although it would have been preferable for the court not to allow this evidence on direct examination of the State's witnesses, we cannot say it was an abuse of the court's discretion to admit evidence that defendant characterized himself as someone else.

Horn was convicted of first degree murder but his conviction was overturned, but not for this.
_____

Now, understand the DA is not supposed to compare the defendant to Manson.

“Finally, the defendant complains of comments made by the prosecutor in closing argument. This assignment of error has some merit. Some of the remarks of the prosecutor [footnote #3] can in no way be considered fair comments on the evidence. Nor are they in answer to anything raised by the defendant. The remarks are totally improper and were it not for the overwhelming evidence of guilt, this case would have to be reversed because of them.

Under the circumstances, we believe that the minds of the jurors were not swayed between guilty and not guilty verdicts by the prosecutor's misbehavior, but they may well have been swayed to return a more severe penalty than they would have given otherwise. For that reason and because of the improper cross-examination of the defendant, the sentence is MODIFIED from a term of thirty (30) years' imprisonment to a term of fifteen (15) years' imprisonment and is otherwise AFFIRMED.”

[3] "... A good citizen? Yeah. He [Megget] was a good citizen. Charles [Manson] was a good citizen before the eyes of the law, before he committed his first crime; so was Patty Hearst, so was Al Capone, before they committed their first crime. And I suspect that somewhere in the vast metropolitan area of Chicago you could have found somebody to say, `Yeah, I knew John Dillinger. He was good to me. He was a good employee of mine.' And I think perhaps even Charles [Manson] had a character witness or two at his trial....

“When combined with the prosecutor's analogizing the appellant to Charles Manson and the Candy Man in closing argument, we cannot say beyond a reasonable doubt that the jury was not unduly prejudiced in its sentencing of appellant. Accordingly, we would modify appellant's sentence from forty-five (45) years' imprisonment to thirty (30) years' imprisonment.”

Despite cases like Megget and Wooldridge, actually preventing the DA from invoking Manson to help convict you for some reason is rather difficult. Invoking Manson and comparing the defendant to him could result in a mistrial. But I wasn’t able to find a single case where that happened. Instead it usually goes like this.

Sharon was convicted of first degree murder and sentenced to death. 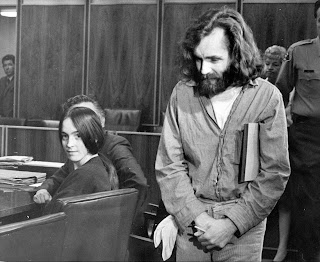 “Appellant also claims the solicitor's mention of Charles Manson in his closing argument warranted a mistrial. We disagree.

While making his closing argument, the solicitor stated: "...[a]nd they are going to tell you that they are both cloaked in innocence. As a matter of fact, its a part of the charge that His Honor will give you that they are cloaked in innocence and only you can remove it. Well I want you to know that the cloak has been worn by many people and its been ripped from them by many juries. Charles Manson wore that same..."

At this point appellant's counsel objected and moved for a mistrial. The trial court denied this motion, instructed the jury to disregard the mention of Manson, and directed the solicitor to "get off the subject."

"When the record shows that objectionable evidence was either disallowed or stricken out on motion and the jury instructed to disregard it, the [appellant] cannot complain." State v. Campbell”

Stroman was convicted of multiple offenses and received life in prison for murder and kidnapping. The appellate court vacated the life sentence for kidnapping- not that that really mattered given the rest.

(f) The prosecutor did not argue impermissibly by telling the jury that convicting the defendant only of involuntary manslaughter "is like convicting Jack the Ripper or Charles Manson for disturbing the peace."

Ward was convicted of kidnapping and murder and sentenced to death.
_____

The good news is that you can use Manson to get out of jury duty….sort of.

“ASSIGNMENT OF ERROR NUMBER SIX
Defendant contends that the trial court erroneously excused a prospective juror, Faye Robinson, for cause.

Faye Robinson testified that she could not vote for a death penalty, stating: "I couldn't say that anyone has to go to death. I don't want to be a part of it." (Tr. 218) Although she would "never vote for it", she "probably" could in the case of someone like Adolph Hitler. (Tr. 219) If Charles Manson or Hitler were being tried, she thought she could consider a death penalty.

The trial court concluded that Ms. Robinson could not impose a death penalty and allowed the challenge for cause.

Ms. Robinson indicated that she would vote automatically against capital punishment except in the case of a mass murder on the scale of Adolph Hitler or Charles Manson. There was no abuse of discretion in the trial judge's conclusion that this disqualified her as a juror.”

‘Mass murder on the scale of Adolph Hitler or Charles Manson’? I personally don’t think there is an actual parallel there.

It appears Ms. Robinson couldn’t vote for the death penalty for a rather wide variety of murderers but it’s not a problem when it comes to Manson- his reputation proceeds him.
_____

And then there is my personal favorite. It requires a little ‘legalese’ to understand. In the law there is a concept known as ‘judicial notice’. Put rather simply, the court may take judicial notice of something that is so well established absolutely no evidence need be offered to prove the point: the earth is round, the sun rises in the east and sets in the west. And….

In the case of Lawrence Walker the DA had this to say: 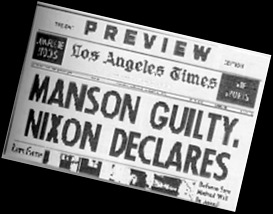 “On cross-examination, when the prosecutor sought to determine whether the appellant had been looking for a job after his release from prison, Mrs. Richardson stated: "He would go looking for a job, but you know, I mean, how many people are going to give Charles Manson a job? [Footnote #1]”

But the fun part is the footnote:

“(1.) This Court takes judicial notice of the fact that the name "Charles Manson" is synonymous with murder and "some particularly terrible crime.”

So in Alabama, at least it is incontrovertible that ‘Charles Manson’ means ‘terrible murder’.

Walker was convicted of robbery in the first degree and sentenced to life in prison without parole as a habitual felony offender.