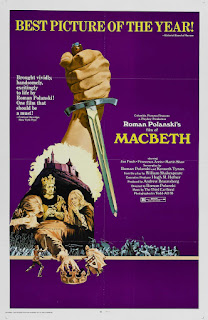 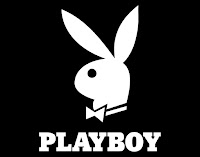 This is the first post in a series that will discuss Roman Polanski films after 1969.
Roman Polanski chose Shakespeare's The Tragedy of Macbeth as his first project in the months following the murders of his wife and unborn son on August 8, 1969. Apologies for the spoiler but Polanski's first celluloid hero after that grizzly night is a man who is delivered into the world via a bloody cesarean section performed with a sharp knife. The director flashes a baby being removed from his mother's womb across the screen twice during the film.
Funding was a problem from the outset. Shocking, I know. Oh to be a fly on the wall in those pitch meetings. You wanna do what?
Eventually, Polanski's good buddy Hugh Hefner agreed to float the boat. Columbia Pictures released the film October, 13, 1971. US opening night took place at the Playboy theater in New York on December 20, 1971. No one gave a shit.
A little background on Columbia Pictures.

They hit the jackpot with Easy Rider in 1969 but spent three times what they took in over the next three years. With blockbusters like The Brotherhood of Satan, I struggled to understand how Columbia was hemorrhaging money. In fairness, Columbia also released The Last Picture Show in 1971. You should watch that one if you love movies. The film was a commercial and critical success and likely fueled a merger with Warner Bros the same year. 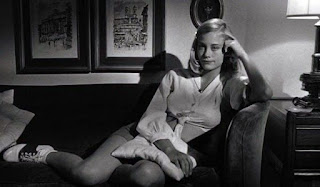 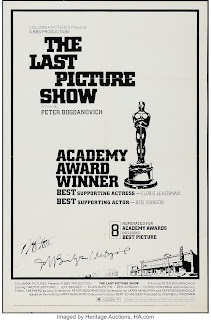 Definitely do not watch The Last Picture Show if you are opposed to seeing young Cybil Shepherd topless. I know sometimes I trigger readers with my effervescent verve. They told me all about it during my review at blog corporate last week. Made me drive seven hours. 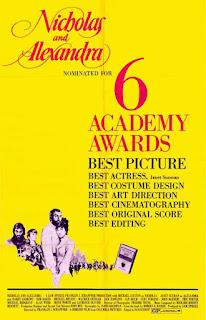 Columbia also released Nicholas and Alexandra in 1971. A box office bomb, the film was nevertheless highly regarded inside the academy, earning six nominations and two awards. Sometimes atta boys are free and sometimes they cost two million bucks. I did not watch this one because I generally stay away from movies where actors display physical intimacy on the poster. Germs and mushiness are no fly zones for this buckaroo.
The remainder of Columbia's catalogue from 1971 I've never heard of but if there's one you think I should watch, please drop a note in the comments below the ones from the people letting me know I'm a bad writer and etc and I will check it out.
"Themes of historic recurrence, greater pessimism and internal ugliness in physically beautiful characters are added to Shakespeare's story of moral decline, which is presented in a more realistic way." Now that's a sentence. No explanation is required.
A quick and painless Macbeth refresh. The battle at the beginning of the film is fought between Scottish Highland rebels led by the head of the Macdonald clan, the Irish, and the King of Norway, versus forces commanded by Scotland's rightful King Duncan, the soon to be wretched Macbeth, and a nobleman named Banquo who is so likable and friendly you just know he's doomed.
You can rent or buy the film on YouTube. It's worth both fees imo.

Here is an awesome side-by-side translation bridging 1606 and now. I'd watch a bit, hit pause, and get caught up on the modern translation.

I also linked Roger Ebert's review from New Year's Day, 1971. Ebert was a genius. He was an adjunct lecturer and PhD student at the University of Chicago until he became so successful writing film reviews that he was able to escape the soul-draining clutches of academia. I sat for an hour last week reading his columns. Such craft. 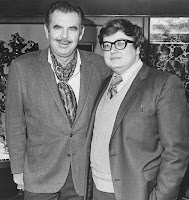 Anyway, you don't need me to summarize Macbeth. The play has been available to the public for the last four hundred and fifteen years and is commonly taught in schools. Plus I provided links. 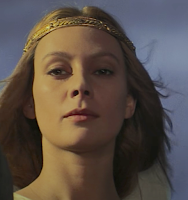 Polanski's three weird sisters are captivating. Their scenes threaten to steal the show.

"WHERE HAST THOU BEEN, SISTER?"

PRINCE/KING MALCOLM: I know I have so many vices that when people see all of them exposed, evil Macbeth will seem as pure as snow in comparison, and poor Scotland will call him a sweet lamb when they compare him to me and my infinite evils.

BANQUO: Were these things we are talking about really here? Or are we both on drugs?

DOCTOR: Evil rumors are going around. Unnatural acts will cause supernatural things to happen.

MACBETH (TO THE GHOST): You cannot say I did it! Don't shake your bloody head at me!

The self-harm never stops. Polanski assaults himself with this work. Our hero Macduff is asked by future king Malcolm why he (Macduff) fled to England and left his defenseless wife, children, servants, and castle household behind so they were easy victims for Macbeth's evil men.

All were slaughtered with blades. 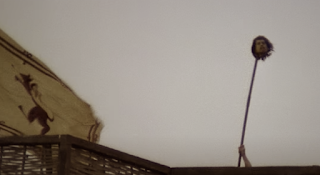 A bit of joy is experienced when Charles Denton Macbeth's head is shown to the crowd! 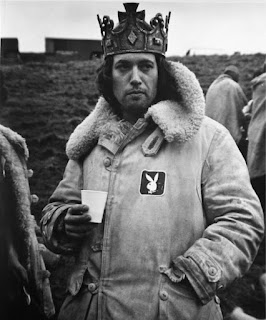 Have no fear. The actor did not die. 'Twas nothing more than movie magic. Here's our godly sovereign pondering the open-ended invitation Heff gave him for a weekend at the mansion.
If you have thoughts on the film, I'd love to discuss it. I feel like Polanski punished himself with this project. Listening to the actors repeat those lines until they were perfect had to be brutal. Regardless, the director delivers a great take on one of Shakespeare's most famous works. Definitely worth a rainy afternoon.
"Out out brief candle..." 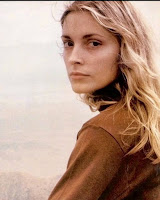