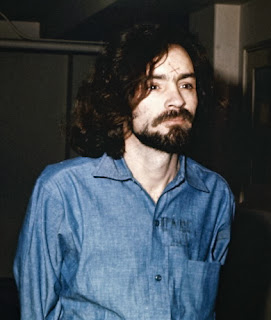 Friend of the blog, Mr. Robert Hendrickson was kind enough to share with us a doozy of a find on Ebay! It is the court transcript of December 24, 1969 (Christmas eve), where Manson appeared before Judge William B. Keene to determine if he had the ability to "represent" himself. (Please read transcript first):

Ok, the part I didn't understand is why the judge told him he couldn't have co-counsel, but could ask for assistance from any capable attorney of his choosing. To me, it sounded almost like the same thing, but I am sure in legal terms, it was NOT. Here is where Judge Keene confuses me:

"But, as I say, it will not be on the basis of three or four or five individuals with the ability to be co-counsel in the matter with each one attempting to call the shots. You are going to have to call the shots yourself."

Something else makes me think too. The part Manson said about the "generation gap." I completely understand where he was coming from in that aspect. Could that have been the motivation behind his need to represent himself? Nothing they did, or said could convince him otherwise. He really made a mistake in his attempt at speaking for himself! Manson never knew when to shut up, and listen. One wonders if Manson would of retained the services of a bad-ass attorney, sat quietly in a suit & tie, and had a short haircut (not shaved), would things have been different, as far as making an impression on the judge & jury? Would they have seen him through rose-colored glasses? Me thinks not! In all honesty, Manson was convicted already, even before the trial began. Look at the incredible negative publicity surrounding the case. You know like hell those jurors SAW, and READ stuff about the murders even before they were called for jury duty. Didn't even Nixon make a comment in front of the press about Manson being guilty? Let me be clear on something, though. I am, by no means a fan of Charles Manson! Personally, I think he is a little creep, BUT I do feel that his rights were violated, and he didn't really get a fair trial. I am not the only one who thinks so either. Internationally known attorney Giovanni De Stefano came to the same conclusion in 2010 when he filed a petition with the Inter-American Commission on Human Rights (IACHR) asserting Manson had been illegally convicted. Of course, that could take years, since IACHR is backlogged with cases, and the courts could always argue that the reason Manson's Pro Per rights were withdrawn was because of his courtroom antics! OK, enough of my blabbering lips....Let us now hear from Mr. Robert Hendrickson on the subject at hand:

Austin Ann has apparently struck right to the heart of the relevant legal issue - "to have the assistance of counsel" outside the courtroom, verses the right to have co-counsel present in the courtroom during the trial and available for actual questioning of witnesses.

FIRST: It must be realized that on December 24, 1969 at the subject hearing Charles Manson was "representing" himself in Pro Per, AND up until that time he was considered a model Pro Per inmate. Only after his U.S. Constitutional right to "represent" himself was set aside, did he revert to verbal outbursts, etc. in the courtroom.

SECOND: It should be obvious that a "judicial" word game (between two supposed legal minds) was at play there. BUT when Judge Keene gave Charles Manson the ultimatium to "waive" his Constitutional right to the Sixth Amendment OR he would be denied his right to "represent" himself in Court, it could only turn ugly. It was then a "contest" between two super-egos (one representing the "establishment" and one representing the underdog)

NOTE: Any attorney who advises a defendant to "waive" any Constitution right may be considered incompetant OR corrupt.

THIRD: Shortly after this hearing, the same Judge Keene determined that "Mr. Manson is incapable of representing himself."  The judge held that to allow Mr. Manson to represent himself would bring about a fundamental denial of due process.

Of course back then, Judge Keene seemingly WON the battle, BUT today we realize that Charles Manson WON the war. Was the Judge actually tricked by a clever con - probably. BUT Judge Keene obviously shirked his judical duties by ignoring the rights of the three girl defendants - in favor of making it all-about-Manson.

For me, because MY right to "free speech" (regarding the MANSON movie) was actually set aside by a Federal Judge in the Lynette Fromme / Gerald Ford case, I personally feel a profound connection to Manson's Constitutional "right" denial and mine. On the other hand, can we really expect a so-called "judge" to render substantial "justice" when a Constitutional Amendment is worded so carelessly that several miss-interpretations can be derived so easily?