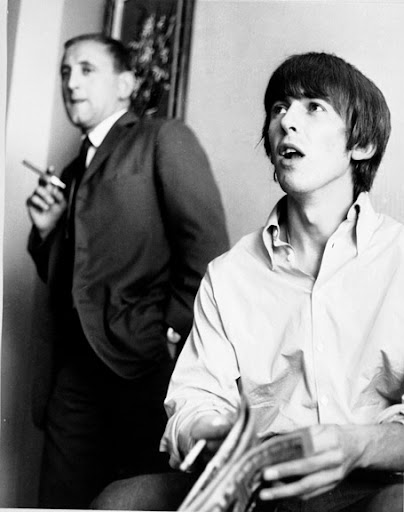 Davis/Harrison 1964. Express Newspapers photo credit.
Last week, I read Manson Exposed: A Reporter's 50 Year Journey into Madness and Murder by Ivor Davis. Nearly five hundred pages in length with sources, author notes, and etc, the Kindle version of Davis' book set me back five bucks. Davis also accompanied the Beatles on their first American tour and wrote about their adventures together. His links are at the bottom of this page.
I'm feeling Joan Didion's passing a bit more than I would've imagined. I love Didion's version of the Sixties and search for her thoughts on this or that often while digging through the times. Slouching Toward Bethlehem should be on every Manson syllabus. Didion is cheap on Amazon if you're interested and likely free online if you spend a moment searching. Kindle readers are in luck. Didion's collected essays are available for the price of a small latte.

Born after the 1960's, I rely on others to fill in the blanks for me on this stuff. Bo Emerson. Youtube. The Internet in general. I always say the comments sections here and elsewhere taught me as much as the posts. And I'm usually down to check out any Youtube discussion on the subject. This interview from Christmas week was an easy watch and the foundation of my post today. The quotes at the bottom of the post are from the interview and not the book.

Ivor Davis first entered our study with Five to Die in 1970. The following is from Davis' Amazon page.

At the time, I was the West Coast correspondent for one of Britain's largest circulating newspapers and my editors immediately assigned me to find out everything I could about this senseless massacre that was instant front page news around the world. What happened that balmy Summer's night became one of the most infamous chapters in the history of brutal murder in America.

Eventually Charles Manson and his band of pitiful souls were arrested not only for the Tate murders but also for those of Los Angeles businessman Leno LaBianca, 44, and his 38-year-old wife Rosemary, whose bodies were found one day after the Beverly Hills killings in a house in Silver Lake some 13 miles from the first murder scene.

A colleague, Jerry LeBlanc, and I wrote a fast book about the Manson murders called Five to Die. We had an early start on the case. As soon as the story broke that Manson, who had been taken into custody at the remote Barker Ranch in Death Valley on October 12, l969 more than two months after the murders, was a key suspect in the case, we began to dig into his background and that of his "family." Remarkably, as we progressed, we seemed to be several steps ahead of police investigators.

Our book was rushed out in paperback in January 1970, seven months before the trial began. It was the very first book to catalogue the bizarre story of life with Charlie Manson. Several years later, long after I had covered the trials which resulted in first degree murder convictions for Manson and four of his acolytes, Charles "Tex" Watson, Susan Atkins, Leslie Van Houten and Patricia Krenwinkel, I met former Los Angeles Deputy District Attorney Aaron Stovitz. He had been head of the DA's trial division and the lead prosecutor in the case before he was removed by the District Attorney for contravening the Judge's gag order.

Much to my astonishment Stovitz dropped a bombshell. "Your book was the blueprint for our prosecution," he said. "It was all there for us to follow." Five to Die had not been a best seller and it received scant attention at the time it was swiftly overtaken by new developments as the sensational trial unfolded.

You can pay a lot for Five to Die online. It's also out there gratis. Either way, Stovitz's bombshell got Davis moving on Manson Exposed...
To this crowd, Davis' book will resemble a long magazine piece. Some of that has to do with your inquisitive nature and lifetime spent peeking behind curtains. The remainder comes from the author's lack of desire to stray far from center these days as far as I can tell. Davis says he thought Helter Skelter was laughable but also recognized others like Lynette Fromme believed Manson was innocent and should be released.
Davis also claims in his book that Fromme threatened him outside the courthouse and asked if knew how a sharp knife shoved down a throat felt or something along those lines.
Yikes but also what are you doing tonight after court?
Apologies. I made quick decisions on women for an embarrassing number of years and some of that is still inside me even though I'm old. Let's get back to it.
Charlie was in court over dune buggy shenanigans in Independence, California, on December 3, 1969. Davis and Steve Dunleavy were there. This was Manson's first court date after Barker. Even though the charge was Receiving Stolen Property, guards brought him in with an extra security chain around his waist. I could not find any evidence Manson acted out in jail during his seven-ish week incarceration before the court date and even found contradictory evidence.

"Manson is most definitely still the leader of the three other guys,” an officer said. “He gives them orders and they obey him.

“We find Manson a model prisoner. He should be. He’s been in and out of jail since he was 15 years old. He seems to be very intelligent and well-read with a good vocabulary.”

The deputy continued, “Manson is cooperative and talkative to a point, but careful not to implicate himself in anything.”

This is the beginning of the jail stint where Charlie complains they won't let him shave or visit a jailhouse barber. Newspaper, tv, and radio hopped right on Manson's shaggy appearance and chains. According to Davis, the LA dicks took Manson to Los Angeles following his plea of Not Guilty.

On Manson: "He was quite eloquent. He made sense." Davis was present while Charlie testified for an hour with the jury removed. According to Davis, when asked by the bench if he'd repeat everything he'd just said but with the jury present, Manson refused to testify. The girls jumped to their feet and said the same about themselves.

Expressing shock over the defense strategy, Davis said, "The lawyers all got up and said we have no evidence to present." The author/journalist believes Helter Skelter worked because the jury saw the girls following Charlie's orders in court.

On Watkins: "Paul looked like a young Clark Gable. Smooth demeanor. Knew how to talk to people."

On Charlie's ability to conquer female minds: "He had the gift of the gab. Within an hour, these girls had become a disciple."

Will the book change your life? No. Did I have fun word searching and date hopping for $4.99 even if I forgot for a year and a half that I own the book? Yes.

If you have thoughts on Ivor Davis and his role in the Manson study, please let me know below.

In fairness and because I've read his post several times over the past few years, my blog colleague George Stimson had this to say about Davis and Five to Die.

If I took a Stimsonesque or Schreckian position, or even without taking one, I notice the Ventura photo of Charlie has been filtered, redrawn, whatever'd, and Manson looks apelike on the front cover of the newest Davis book.

But like an evil, hypnotizing ape amirite? Genius and idiot all rolled into one. +ggw

A bit on Ivor and The Beatles for Fab Four aficionados and fans.