*A little about Ron Hughes from various online sources.  According to vital records Ronald William Hughes was born March 16, 1935 in Los Angeles County.  The 1940 US Census says that he had one older brother and one younger sister.  His parents were named John and Anita and his father was employed as a draftsman in the oil industry.  They lived at 2807 Badan Ave. Los Angeles.

Ron was a Korean War veteran having served in the Army.  He graduated from UCLA.  He was admitted to the California Bar Association June 1969.   He was employed by the public defenders office and became acquainted with Manson while visiting him in jail.  He was Manson's attorney for a short time before becoming Van Houten's attorney.  The Manson case was literally Ron's first court case. 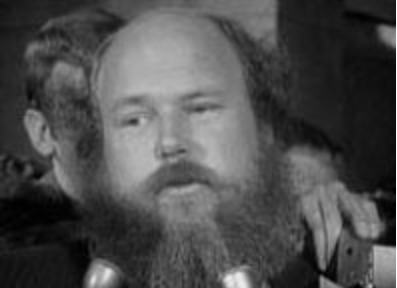 This is an article that appeared in the Los Angeles Free Press December 11, 1970, page 3.  It is NOT an article that is included in "The Charles Manson Report" compiled by the Freep and available for download at LSB3.com .  http://www.lsb3.com/search/label/Los%20Angeles%20Free%20Press%20-%20The%20Charles%20Manson%20Report  (This is a great resource and you should download it for future reference)

It's a wonderful tribute article to the man that was Leslie Van Houten's attorney.  Hughes body had not been found at the time this was written.

We were returning from the Sespe Hot Springs area past the freshly oozed-together mounds of silt and the pink-ended living tree trunks scattered in the chaos of the river bed and the boulders pushed down the gorge by the idiot rain-flood, knowing that Ron Hughes, gentleman and friend, was dead.  In his honor, as we drove down the muddy road, we were violating H11 530 of the California penal code, filling our lungs with the sweet smoke of Ra.

The ardent cause of his death was an intense spew of rain, 12 inches in 18 hours, that caused a punk little creek to rise up and widen and sweep him off his feet as he attempted to carry some transcripts of the trial from his mud-marooned VW back to his camp.  Evidently he tried to ford the rising waters and God stomped his face.  In the incidence of those Boy Scout several years ago, some were washed down to the sea many miles away down Sespe Gorge to the Santa Clara River to the Oxnard confluence.  Thallata!!!  Thallata!!!

In a box in Ron's marooned VW, were several books, among them: Criminal Law and Its Processes, Attorney For  The Damned -- Clarence Darrow, The Death Penalty in America and a book on organic food structures.  He was sorely human, attired in his sharp suits from the MGM props sale of last summer, as the trial progressed and Judge Older slapped him into the slams for a jive contempt of court charge, and one observed him investigating and preparing his case.  His client, Leslie Van Houten, had the best chance to win her freedom and he was totally aware of it -- and he worked hard on her behalf.  He brought into court what seemed like half of the staff of the Patton State nut hatch wherein had recently resided Diane Lake, the chief witness against Miss Van Houten.  He brought the staff members into a court hearing to try to show that her mind was out to lunch as of being able to remember events during August 69 chop-time.  He transcribed hours of tapes of the various police interrogations of such as Danny De Carlo and Miss Lake (AKA Snake, Diane Bluestein and Diane E Mak), seeking data with which to save the life of his client.

He was not a robot; he took his time.  He had the greatest knowledge of dope-lore one has encountered.  It was thrilling to watch the jurors jotting down notes as Ron cross-examined Linda Kasabian about trimming the strychnine hairs off a peyote plant.

He had a great sense of humor, as when he described the jury, when asked by the media  just after the jury was "chosen", as being like a bad acid trip.  Or when he asked the Polanski maid, Mrs. Chapman, if Peter Sellers had made any calls to the Cielo Drive residence on August 8, 1969.  Or when he seriously discussed making pregnant, thru some sort of courtroom sperm transference, the female defendants, just before the penalty phase of the trial so as to arouse emotions of life and pity in the jury.

He was a new form of radical lawyer.  There was one point last summer when he was going to wear a white toga (from MGM Ben Hur props, buddy) to court - but it was made apparent to him that Judge Older's mind was not dialed anywhere near such an event.

It was refreshing when he brought several of R Crumb's comic books, including  Snatch #2, into court for the girls to read.  He was a great guy, with no hostile edges.  I never heard him say a cruel word about anybody.

Last June he and I went together to Inyo to visit the Barker and Myers Ranch, talk to the local miners, and generally go on hole patrol.  We drove one of the automobiles from his West L.A. automobile graveyard - black hulk of impending desolation that severally he had parked by his house.  In the middle of the Mojave desert in the middle of the night: wshoomp! the hood of the Stude fell away and sailed into the night and we spent a bit of time scouring on the hood.  Later we walked all over Barker ranch area looking for lost dune buggies, hidden camps and the layout of Manson's last stand.  It was a marvel to see him stalking in his tennis shoes down desolate canyons speaking data into his tape recorder.  He was great.

The greatest tribute to Ron Hughes came from a close friend who has back packed into the Sespe Hot Springs area almost daily looking for signs of him.  Often he was carted around thru the mud in Ventura County Sheriff's vehicles as he searched.  In spite of the close proximity of the police, Ron's friend nevertheless carried with him a waterproof jar with some rolled Ra weed joints so that should he find Ron safe, he could rejoice and hold a communal ritual of happiness. 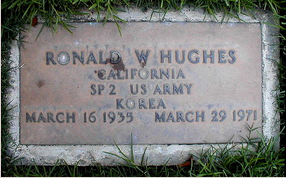