I have an etymological question: Do you think "creepy-crawl" was coined by Manson and entered into the vernacular through BUG's book, etc., or is there evidence the phrase pre-dates Manson?

Do you think this video is legit:
http://gorightly.wordpress.com/2009/01/14/a-manson-family-creepy-crawl/

I did ask Adam the blog owner about the video posted on his site.
He told me he does not recall where he found it.
Nor does he think it is real.  Adam said the movie might be a Jon Aes-Nihil Production.

One of our readers asked-

I am interested in finding out if there was any connection to a founding Scientology member, Patricia Krenik to the Manson family.  Any information is greatly appreciated.

Got Face? Disturbing to say the least

Please use bath salts as directed. 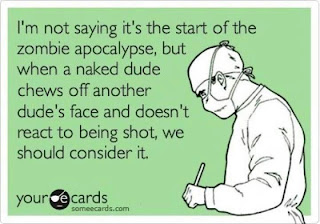 Yes Eviliz is a ghoul.