most likely to escape.

most likely to be considered the Zodiac Killer

﻿
~Where was Bruce during his 1970 disappearing act. The L.A  sewers, Death Valley or Midtown,TN?
Below is a link to a semi recent article about Bruce Davis from one of his home state news papers. Rumor had it after Mother Mary implicated Bruce in the killing of Gary Hinman, he and Brenda went into hiding.  But not before a quickie wedding in Vegas and a honeymoon in the L.A. sewer system. The bride and groom wore freshly carved  X's on their foreheads.  At the reception they dined on various species of cesspool vermin.  Yummy.  At some point during the under ground festivities, Bruce returned to his home town without his bride, stunning the locals with his change in appearance.  You would think he would have taken Nancy home to meet her new in laws?


﻿﻿﻿ "I recall Mama's voice saying, 'As long as I have a job
and one dollar to my name, Bruce will go to school
as long as he wants to.  And you won't have one
(expletive)  thing to say about it'.  .....Bruce's sister Judith speaks about her mother and drunkard father's battle to continue Bruce's education.

Obama rejects Manson's request to over turn his conviction

According to the article from "Vanity Fair" Spain, the lawyer Giovanni DiStefano announced that it will take the case to the Supreme Court and will also appeal to the Govenor of California.
Hmmm, Bruce tried that and didn't have much luck. Doubt Charlie will either. The link is from the same Vanity Fair article (in English).

Vanity Fair's Spain magazine's exclusive interview with Charlie.
I have included the link to the articles through Google translator,since the entire article is in Spanish. I myself took 4 years of Spanish in high school and learned nothing but a few cuss words.  You get the entire Charlie interview the first one in many, many years.  Lots of good stuff there.

More on "Death to Pigs"

I'm up to page 177. The dialogues are very "deep" at this point and get very heavy into the Family philosophy. I cannot help but focus a lot on Clem and his seemingly articulate manor. In many other sources he is made out to be mentally deficient. These dialogues show me that he ISN'T. I won't quote any dialogue. Read it for yourself and make up your own mind.
Here are a couple of other paragraphs that jumped out at me:
"Whether one agrees with Merrick or with the Family on the subject issue, the underlying fact is that the hard core members of the Manson Family, who are here now and debating their position, are obviously not a bunch of drug crazed hippies. So how did that specific label come about, and why was it incorrectly attached to them?"

This rings especially true to me with Clem.

"Gypsy once explained to me: close your eyes and imagine that you are slowly rising up and actually leaving this earth, all the while looking back and seeing the earth look smaller and smaller. At some point, the earth will appear as just one round circle and you will only be able to see all people as just one image. That is what God sees, from his vantage point on high. The Family does not believe, as the church preaches, that God sees each and every one of our faces individually."

A very important revelation regarding Manson philosophy (and in my mind how it relates to the crimes). This also makes me think of Sandy, Squeaky and other Family members holding up the "one" index finger... 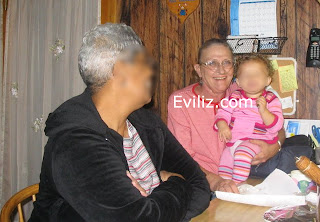 Weird, there are more Ella pics available now than of her in her youth.
The only one from then is the courthouse pic from a previous post. 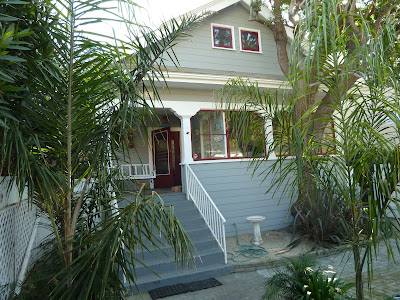 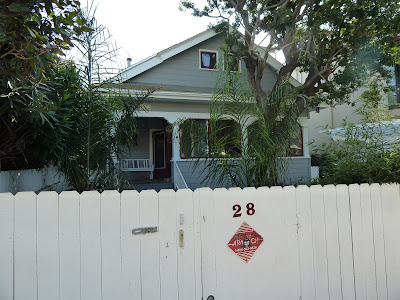 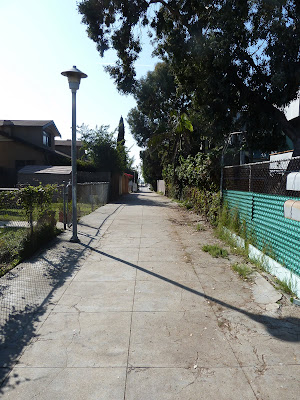 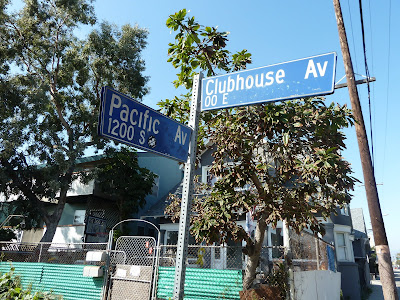 Like the Willett's and Shorty Shea, some say Zero knew too much. 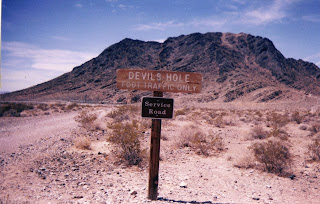 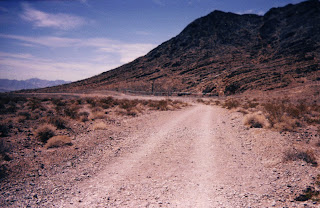 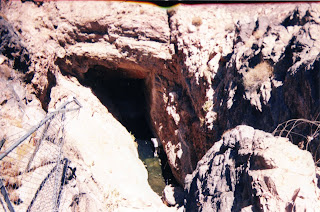 Devils Hole is located in south-central Nevada.  The walls of this predominantly subaqueous cavern are coated with dense vein calcite.  Calcite is the primary mineral in metamorphic marble.
It also occurs as a vein minereal in hot springs, and in caverns as stalactites. The actual hole is filled with salt and water heated by a geo thermal spring which miners used to bathe in.

It is the ONLY home to the "pup fish", a species of blue minnow.

These fish have never been found inhibiting any place else besides Devils Hole.

Devils Hole is also where Charlie sat meditating for three whole days straight, positive that is was "the bottomless pit" the Family was searching for. The entrance to the underworld where they would hide to avoid armageddon.  Bad idea if they tried it, In 1967 two divers dove down to see what the hole held.
Their bodies were never found.

thanks to our grump from pahrump for the pictures. 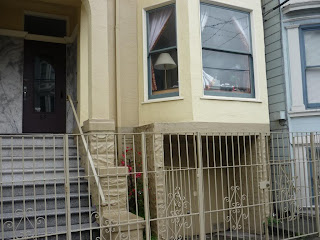 "Death to Pigs" has arrived

I ordered the new Hendrickson book "Death to Pigs". It arrived today. As an established customer I was able to get a "First 100" galley with a certificate of authenticity signed by RH. Cool.
I will be reviewing it as I read it. Perhaps not chapter by chapter, but as the spirit moves me I guess. At the moment, I'm insanely busy with work as well as training twice a day for a bodybuilding competition in 4 weeks. So, this may not be a fast read. Bear with me though.
Page 1 ...

Lindsay Lohan-Eyes of a Dreamer, maybe not?

According to today's news Lindsay "klepto" Lohan was sentenced to 120 days in jail for violating her probation.  Judge Sautner remanded the actress into custody.  She was booked and taken to county jail.  Lohan's attorney Shawn Chapman Holley says she'll appeal the decision, which will allow the actress to post bail. They also changed her felony grand theft charge to a misdemeanor.  It's not clear yet how long Lindsay will be in custody before release.


One of my sources at the morgue mentioned they are preparing for Lindsay's arrival by stocking up on super glue.  If any of the deceased arrive be-jeweled, the morgue attendants will begin the tedious task of gluing all jewelry to the deceased bodies as a precautionary measure.


Lindsay's pre-trial hearing is scheduled for May eleventh.  The trial begins on June third.  Shooting for Eyes of a Dreamer begins July fifteenth.  I reported yesterday they have no qualms of replacing her as Sharon Tate if her legal problems coincide with production.

PRETTY FACE
http://www.prettyfacemovie.com/﻿
I noticed on their website two familiar names starring in the movie-Val Kilmer and Lea Thompson.
The site is not 100% finished.   Yet there is a trailer and shots of premier posters.

Synopsis
In the summer of 1969, Jenna, a rebellious fifteen-year old girl, abandoned by her deadbeat single mom, steals a horse from her best friend's family and runs away from their loving arms.
Her naive and very square best friend follows her on another horse and the two girls stumble across the Manson family living in an abandoned movie ranch.
Jenna, a street-smart budding singer-songwriter, is not fooled by their talk of peace, love and living free, but her sweet and innocent friend is gradually seduced by their siren call. The situation gets dangerous, but Jenna stands her ground against the infamous Charlie, Bobby and Tex and is forced to make a great and heroic personal sacrifice to save her friend from a horrific night with the wanton members of "the family."

Pretty face lives halfway between fact and fiction, blending factual details about the day-to-day existence of the Manson family in the weeks leading up to the infamous murders with the fictional coming of age story of a damaged, crass, but ultimately loving, teenage heroine.

EYES OF A DREAMER
﻿﻿


There is not much info about this movie, just rumors.  The only description I can find is,the movie follows the Manson Family through their trail of carnage.
Tyler Shields is producing as well as starring as Charlie.  I think he wrote it as well.  Shields is a celebrity photographer and a good friend of Lindsay Lohan.  According to gossip, shooting will start July 15, 2010.
But-  Linsay Lohan has court at the end of this month.  There is the potential she might have to serve some prison time for her habitual kleptomania.  If that happens, she will be replaced.   Marilyn Manson is rumored to be playing Tex.

"I decided I wanted to tell the story of eight of the girls, from their teenage years through to the minute before the Tate/LaBianca murders. Manson Girls is a movie about how neglect, rejection and abuse can transcend into hopelessness, despondence and ultimately, violence.  Just to be clear, this is not a story about Charles Manson.  It is the story of eight of the girls, told from their prospective, before the Tate/LaBianca murders take place.  And I never show Charlie Manson's face in the film."

Update on Manson Girls- I spoke to Susanna again a few days ago.  They are currently shooting in L.A. and Puerto Rico.  I mentioned some rumors going around that her movie would not be made.  She assured me it is being made as we speak.

"I will be making my directorial debut from a script I wrote," Kosar told STYD.  "The movie won't focus on the Manson murders.  Nor is it a Manson biopic.  It's a family biopic.  A movie about a surrogate family of wayward teenagers who, through extraordinary circumstances, came together and were transformed into the most notorious American family of the 20th century.  Hence the title"
He continued: "it is not a horror film, though the subject is inherently horrific.  The goal is to do, finally,after forty years, the first authentic film about the so-called Manson Family.  Unlike other films on the subject, 'The Family' will also spend time getting to know the victims, particularly Sharon Tate, who will be portrayed very sympathetically.  This won't be a slasher film, but it won't gloss over the violence either.  My film will concern the family itself.  Who they were and what their lives were like with Manson."

Read more at:   http://www.worstpreviews.com/headline.php?id=19527#ixzz1KDRNZWOh
The Dead Circus
The film will take on the case of singer Bobby Fuller, (I fought the law) whose death, though ruled a suicide,raised suspicion of foul play and potentially murder.  The script, which is yet to be written, will focus on the allegations that Manson and his family were behind the murder.  Michael C. Hall will pay one of Fullers managers, while Melissa Leo takes on the role of a former Manson family member.
Read more:    http://icydk.com/2011/04/05/james-marsden-to-play-charles-manson-in-the-dead-circus/


WE HAD A SIMILAR POST UP EARLIER.
SOMETHING HAPPENED AND IT WENT
POOF!  THIS IS THE NEW POST. THOUGH
NOT  AS LOVELY AS THE ORIGINAL ONE
WHICH MATT WORKED  SO LOVINGLY,
EDITING AND TWEAKING.
IT WILL HAVE TO DO I GUESS. 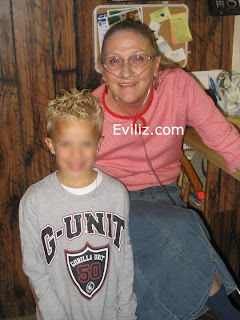 Posted by Panamint Patty Have y'all ever seen this portrait that Kat Von D did? Whose arm is it? Panamint Patty does not have any tattoos herself but can appreciate the effort and dedication that went into this. WOW! 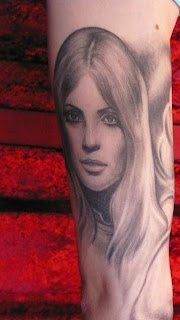 Eyes of a Dreamer is the "rumored" film.

LINKS TO THE RUMORS