I was looking through some pics of Griffith Park Love-Ins for something I'm writing and came across this guy in a SS vest. Thought you might enjoy it. There are quite a few pics from that day.
http://www.pbase.com/saintj/image/32263193 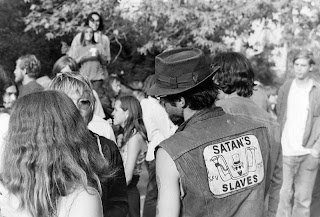 Also, I lived in Los Feliz just a couple blocks from Waverly for the last 6 years or so in the guest house of a woman who lived there since '63. Her friend N lived at 3093 St. George which is the yellow lot on the map below.

The night of the murders they had a "sing" at the St. George house until 1AM or so, a dozen or so people singing folk songs. Then they left, nothing was unusual. In the morning N told me she let the dogs out to sniff around in the street like she always did. They went up the driveway across the street and came back with their tails down. She said she told this to the police when they came later. No biggee but pretty creepy to hear her tell this. She moved away last year. Here's her house listing. http://www.redfin.com/CA/Los-Angeles/3093-St-George-St-90027/home/7063679

Also, she told me that Suzan LaBerge worked at the Tam 'o Shanter at this time and she went right back to work which she thought was strange. She said she thought she had a drinking problem (who could blame her).
We used to go eat there on holidays when I was little.
http://www.lawrysonline.com/tam-oshanter/general-info

Of course Arthur Lee's "Castle" was a few blocks away as well, though he was long gone by then.
http://love.torbenskott.dk/forum/topic.asp?TOPIC_ID=583
http://www.youtube.com/watch?v=J1jpoCnlk-8