The Leary Estate has notified us that eBay has taken down this listing, citing their policy of not allowing postings of "items that are closely associated with individuals convicted of violent felonies or individuals notorious for committing murderous acts." Persons interested in purchasing it can contact Patty (Patty at Mansonblog dot com) and she will put them in touch with the seller's representative. Please note the description below is an updated version.

The Timothy Leary Estate is selling a pair of interesting letters from Charles Manson and from Lynette (Squeaky) Fromme to Tim Leary, who had several weeks earlier escaped from prison and was currently living as a fugitive in Switzerland.

Manson's 1400 word, 3-page letter is addressed to "General Tim Leary (Sunstone)" with a typed signature "Manson."   The letter can be dated from it's appearance on the front page of the LA Free Press, Oct. 9, 1970, under the title "An Open Letter to Tim Leary."  It was subsequently reprinted throughout the underground press. It comes together with a handwritten letter from Fromme to Leary in Switzerland one year after his prison escape. 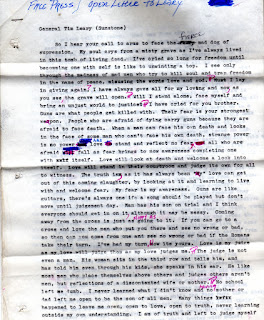 This letter displays Manson’s philosophy and hypnotic style of writing and caused paranoia in the counterculture by linking him and Leary. At the time Manson's guilt was not yet confirmed, and some wondered if he and his followers were being set up to disparage the hippies.

Leary recounts in his autobiography "Flashbacks" (1983) how he and Manson conversed from adjoining cells in prison after he was captured and incarcerated at Folsom State Prison in 1973. A play about this meeting was staged in Los Angeles in the early ‘90s. Manson’s “open letter” served as a media platform for his philosophy and his apocalyptic vision of the future, and to get Leary's attention. Leary referred to Manson as "the first psychedelic criminal,” which is how he himself was viewed by his many detractors for promoting LSD. 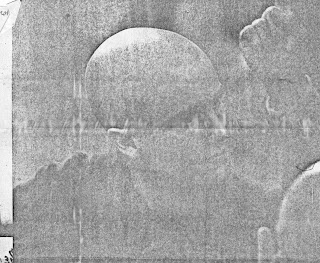 Manson family member Squeaky Fromme, one of his earliest followers and “ex-officio leader of the Family after Manson’s arrest,” was one of the most articulate and outspoken members of the Manson family. In this letter she writes Leary in Switzerland, enclosing ”an old letter to you once printed in the [LA] Free Press. Did you see it?” Fromme's letter (a little over 100 words) is written in ink on both sides of a xeroxed photo of one of the Manson girls who shaved their heads during the trial. 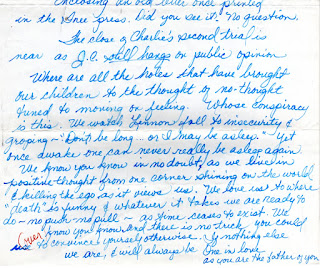 She refers to John Lennon lyrics which she interprets, and adds: “The close of Charlie’s second trial is near as J.C. still hangs on public opinion.” On another page there are 15 lines of typed text probably written by Fromme referring to the vigil: “You ask why do we sit on this corner day after day, and why we’ve sat here for over a year . . . We have many times wanted to get up and trip off. Yet we are bound here in one love.”

The letter comes with the original mailing envelope bearing the return address c/o a friend of hers in Hollywood addressed to “Gen. Tim Leary” in Villars, Switzerland, postmarked Oct. 14, 1971 (one year after the Manson letter was published). Knowing that Leary was a fugitive on the run, Fromme assumed he had never seen it, so she mailed him this corrected carbon typescript which she herself may have typed, the top copy (without corrections) having been the one used by the LA Free Press typesetter. Leary passed it on to his archivists when they visited in early 1972. 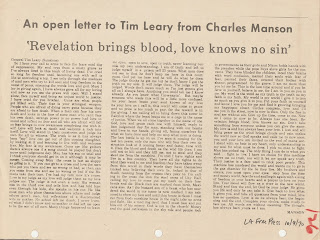 These letters are iconic artifacts, linking two of the most famous/ infamous figures from that era, not to mention the best known of the Manson girls.Original autograph material from the period of Manson's arrest and trial rarely if ever appear on the market. Provenance:  Timothy Leary Estate (Futique).