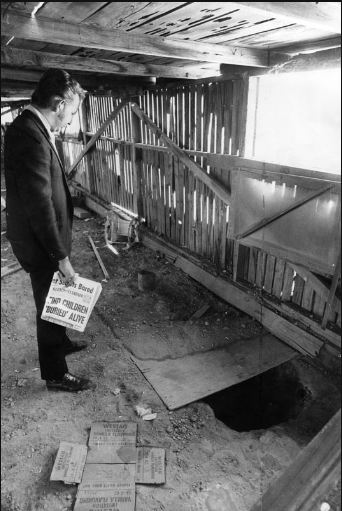 Five Children ranging in age from 1 to 10 were found living in a manmade cave beneath a dilapidated chicken coop on an abandoned ranch four miles west of Lancaster, sheriff's deputies reported Wednesday.

Four of the youngsters were believed to be the children of Dennis Rice, a Manson "family" member who was indicted Dec. 18, 1970, along with four others on charges of having conspired to murder Barbara Hoyt, a state witness in the Tate-LaBianca trial, by giving her an LSD-spiked hamburger.

The children were identified as Kathryn Rice, 10, and her brothers, Joseph. 7, Samuel,6, Nickolas, 3.  A fifth child, a girl believed to be about 1 year old, was not identified.

Sheriff's Sgts. Armond J Licht and Carolyn Boston went to the ranch at 4011 W. Ave. I on a tip that a 14 year old runaway girl from the Los Angeles area was living there.

The officers said they found the girl, whose name was withheld, and the five children.

Also taken into custody were two 19 year old "hippie types" identified as Patrick R. Walleman and David Lee Stoffer.  They were booked at the Antelope Valley substation on suspicion of endangering the health and safety of minor children and on suspicion of possession of marijuana.

Sheriff's deputies said the children were "very dirty", poorly clothed and appeared to be undernourished.  The were taken to McLaren Hall in El Monte.

Investigators were trying to determine how long the children had been living in the 3-by-9 foot plywood-lined cave.

This much is known about the four Rice children:  A missing persons report was filed at Temple City sheriff's station last Feb. 14 by their mother, Sarah Rice,29, Santa Rosa, formerly of Temple City.  The report stated that she had separated from her husband and left the children in his care because she was "in poor health and not capable of caring for them."

The report added that Mrs. Rice understood that her husband had left the children in the custody of "members of the Manson family" when he was jailed.

She told investigators, the report said, that her husband warned her not to notify authorities because the children's lives would be in danger.

The report also stated that Mrs. Rice contacted "some Manson followers who were living in a van truck."  She said they told her they knew where her children were but would not tell her.

The whereabouts of Dennis Rice was not immediately learned Wednesday.

However Rice and his codefendants were given 90-day jail sentences after pleading no contest to a reduced charge of conspiring to prevent a witness from attending a trial in the Hoyt case.  He later was given a jail sentence in an unrelated misdemeanor assault case. 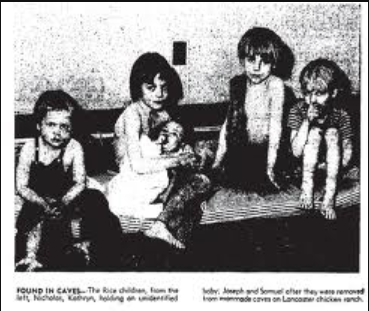