In 1973 Truman Capote interviewed Bobby B. The interview was later published in the book  " .45 Dangerous Minds", a compilation of Seconds magazine's favorite interviews. Below are a couple of parts I found interesting in the interview. There is one thing in the interview that irritates me. Capote refers to the LaBianca's as the Lo Bianco's. Where the fact checker was I have no idea.

RB- "Everybody always wants to know how I got together with Manson.  It was through our music.  He plays some, too.  One night I was driving around with a bunch of my ladies.  Well, we came to this old roadhouse, beer place with a lot of cars outside.  So we went inside and there was Charlie with some of his ladies.  We all got to talking, played some together; the next day Charlie came to see me in my van, and we all, his people and my people, ended up camping out together.  Brothers and sisters.  A family."

TC- "Do you consider killing innocent people a good thing?"

RB- "Who said they were innocent?" They burned people on dope deals. Sharon Tate and that gang.  They picked up kids on the Strip and took them home and whipped them. Made movies if it. Ask the cops; they found the movies. Not that they'd tell you the truth."


To read about Gary's murder and more go to  http://capote.wordpress.com/

Thanks to member William Marshall for jogging my memory about  ".45 Dangerous Minds." 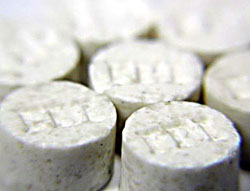 In the interest of keeping the victims from being any further demeaned than they already have about bringing on their own deaths by insinuating that Roman Polanski sent trunks filled with the drug MDA to Sharon--and therefor making her an accomplice--I think there are a couple of thoughts to keep in mind concerning MDA.

I realize that if you go on the internet to search the history of the drug it will say that it was made illegal in 1970--therefore in "revatron's" opinion it had been around for years--and it had, in the synthetic pharmaceutical testing stages--just as LSD had been around since before the 1940's. Nevertheless, these are drug histories that are being written years after the fact.

But, lets go back to 1969 and what we know are the facts of what was happening in the investigation of Sharon's murder. Of note in the first Tate homicide report: "...Harrigan became quite friendly with Frykowski and Folger. This was mainly due to the fact that Frykowski was interested in known drugs on the market, in addition to future synthetic drugs that were being made in eastern Canada. ...Harrigan told Frykowski that they would obtain the new synthetic drug, MDA, from Canada and allow him to be one of the first to try it. This conversation or agreement apparently took place sometime in the early part of July, 1969 at the Polanski home...

Of further note, we have one of Lt. Bob Helder's portions of Five Down on Cielo, his book collaboration with PJ Tate written in 1970 :

What we needed was a stronger motive for revenge. Perhaps concrete evidence of a dope burn. Along these lines we pursued Kraznowski's account of Frykowski and Harrigan's discussions about the new drug MDA. We knew that the coroner had found an unknown drug in the urine specimens taken from Abigail Folger and Woytek Frykowski. I inquired whether the Coroner's Dept. was aware of this new drug. No came their reply. I checked with the chemists of our  own crime lab and they too were not aware of it. So, I contacted the local agent for the FBI of Narcotics and asked if he could locate a sample. He rang back twenty minutes later to tell me that the drug was so new their laboratory in Washington only had a single tablet but they would be willing to send us a portion of it air mail special delivery. Suddenly, a thought occurred to me and I looked up the phone number of Paul Caruso, Tom Harrigan's attorney. I told him our problem and asked if he thought he might be able to get Harrigan to deliver a sample of MDA to his office if I would guarantee no questions asked. An hour later, a brown paper sack containing 25 tablets was delivered to my office. I took five of the tablets to the Coroner's office and sent the remaining 20 to the FBI.