Not In My Back Yard! 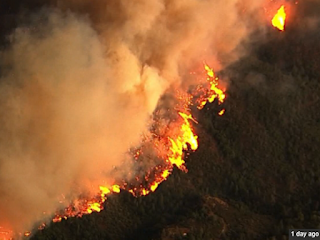 It is with great sadness that we are reporting our newest blogger and good friend George Stimson and his partner Sandy Good have lost their home to California's latest wildfire.  The Valley Fire in Lake County has been fast moving and ferocious, they are by no means alone in their loss but when it's someone you know it somehow makes it more personal.

The Valley Fire started early Saturday afternoon while George and Sandy were out of town.  It began about two miles from their home, as the crow flies.  In less than 24 hours the fire grew to 40,000 acres.  It is now at 61,000 acres and counting.  California's drought conditions coupled with last week's 100+ degree temperatures in the area no doubt contributed to the aggressiveness of the fire. Over 10,000 people have been displaced and more than 400 homes lost.  Entire small communities were wiped out.

George and Sandy do have some place to stay.  They are not in a shelter or living in their car and for that they are grateful.  They may be in a state of shock now but they will bounce back.  We wish them good things for the future.

We've been emailing back and forth for the last few days trying to keep each other informed and follow what's going on. You're safe and in the end that's what matters. Glad you were able to save the rabbits. Take care friend, and let us know if you need anything.

If Marcia Clark had been the Manson prosecutor, they'd all be free...


I came across these videos in researching something and it reminded me that, no matter what people want to think, Bugliosi was in fact a truly brilliant prosecutor.  You look at the OJ Simpson trial, and as Bugliosi comments, those prosecutors did an F- job, and they did. Everyone likes to blame the jury for the verdict, but it really was the prosecution.

Bugliosi didn't make up the HS motive, it was handed to him by a variety of police witnesses prior to Bugliosi being assigned the case. He took it and ran. Watch the first few minutes and you immediately see that while he may be talking about the Simpson case, he could just as easily be talking about Manson et al.

People may hate him for hiding the "truth", but did he willfully mislead people? Think about what he had as a prosecutor: Three young women - only one with physical evidence, Krenwinkel's fingerprint, one fingerprint on Watson, who will not even be at trial because he's fighting extradition, and a gun found on the hillside, a witness for the grand jury who later recants, and Linda Kasabian. That's it. If Marcia Clark was the prosecutor of Manson, they'd all gone on to live in free society without serving a day in prison. Bugliosi got convictions on the actual killers and Manson. Without Watson in the game, he needed Manson as the fall guy to these women. Pretty amazing when you think about it. Did he hide facts? Probably. But I'm guessing he weighed his options and as so much was falling through the cracks, he grabbed what he could in the name of justice.

One hour and ten minutes in kinda says it all when he says, something like, "That's what a prosecutor does in a criminal trial, present incriminating evidence." And, no matter what conspiracy theory you wanna present, Helter Skelter was undoubtedly incriminating evidence. Whether it was actually a motive for these crimes or not, it was incriminating evidence from multiple sources interviewed before Bugliosi was given the case. We can't even say those witness were coached by Bugliosi because so many made their statements before even meeting Bugliosi.

Would we all have been happier if he'd ignored this evidence and no one was brought to justice for these murders? Absolutely not. This leaves you with one thing and one thing only, Bugliosi did his job. End of story. Did someone get away with murder? Maybe so. Did he successfully prosecute those that he did have evidence on? Yes.

We all play Monday morning quarterback with things that we think are evidence, things that we think were discovered years and years later that may or may not have had anything to do with this case. But all this "thinking" isn't prosecutable because it's all speculation and our criminal system (thank God) doesn't run on speculation. It runs on "Beyond a reasonable doubt". There has yet to be an ounce of viable proof that could properly be presented in a court of law. Yet we expect Bugliosi to have presented evidence of another motive.

In the history of the criminal justice system, I'll bet there are thousands upon thousands of criminals that got away with murder because the evidence just wasn't there. Look at Robert Durst. There's probably 90% consensus vote in the public that he's guilty of murdering not only the old man who he was found not guilty of killing for reason of self-defense, but of his wife, and Susan Berman yet he's (to date) never been brought to justice for those murder cases. Is there a conspiracy to keep some truth from the public on Durst? No. The evidence just hasn't been there to get a successful prosecution. And, due to double jeopardy, once we blow a case, we blow it. So, the DA's office waits and they wait until they do have a case guilt beyond a reasonable doubt

When there's no evidence, the justice system and the prosecutors, including Bugliosi are blameless. Was or has there ever been evidence, beyond hearsay that Joel Rostau was involved? The Mafia? Drug overlords? Anything? Anything at all that could legally be presented in a court of law? No. So why does anyone blame Bugliosi or anyone else of "hiding" information?