What, one asks is the point of rehashing up evidence from a case that was closed a long, long time ago? Why do people, including myself still seem confused as to what really happened those two nights in August, 1969? Will anyone, other than the perpetrators, and their friends find out the truth, once, and for all? I do hope so. Sometimes I find myself feeling guilty for even being interested in such human tragedy, but on the other hand find myself pissed off that the actual killers still haven’t divulged the TRUE sequence of events. So, as it turns out, I was (Internet) visiting Cielodrive.com, which is a really good site, and came across some photos of the Cielo crime scene that reminded me of the posting I read a while back about if/when Manson & friends returned to the scene. I have never thought Manson would of been that dumb to place himself at the scene of the crime, when he didn't even go with them the first time around. Of course, Manson has never been a suave, smooth criminal. He always got caught, no matter what! Anyway....something caught my attention in the photos.

In the first crime scene photo, you are shown the living room area during the investigation. You can clearly see where the rope is hanging from the beam. 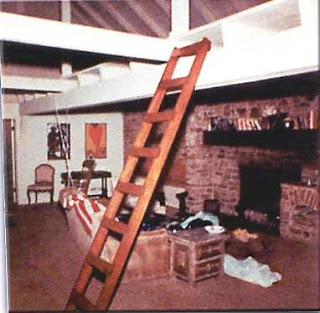 In the second photo (courtesy of Cielodrive.com), you see one of the detective's hand pointing to a blood smear on one of the living room beams: 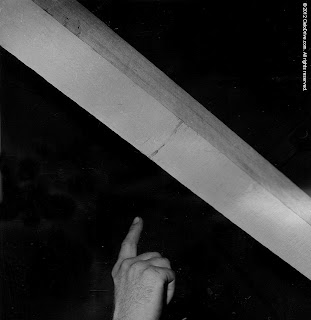 Ok, in the third you see where the actual beam is located: 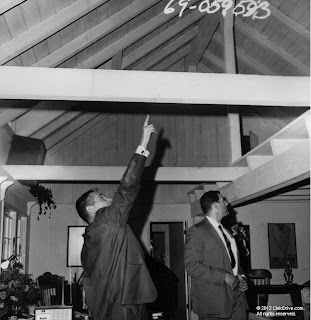 This blood evidence is clearly not making sense with what the killers stated happened. Yes, I know the killers are/were liars of the most devious kind, but I ask myself "Why would there be blood on THAT particular beam, if the rope to "hang" them was the beam closer to Jay Sebring's body?" Did they move the rope after they had begun stabbing?