Two years ago this month, Charles Manson gave an interview to NUG magazine that read in part:


"The Savior or Savior Project is an idea of Charles Manson’s for a seed gun: a gun that anyone/everyone can use to quickly and effectively plant seeds over a vast area. Currently, the project is developing functional loads and proper seed/compost mixtures to be used universally in common paintball guns. Mr. Manson has expanded the invention to include M-80 block guns converted to seed loads, seed-mortars, seed-bombs dropped by helicopter, seed artillery, etc." 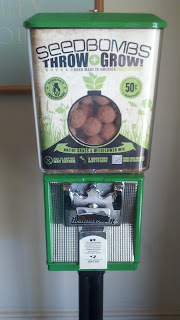 You can see that article here. At the new ATWA website, they discuss the Savior Project in more detail, and state that "The Savior is not a patented invention, but more of an idea to be developed and spread."

Patty had this in the back of her mind when she visited the offices of a friend and saw the vending machine at right in the lobby. Seriously! There was a seed bomb vending machine right there: the last thing Patty was expecting to see in an otherwise non descript little office building. The seed bombs cost 50c each and are handmade in Covina, CA by an organization called "Greenaid Seedbombs." The Greenaid Website reads in part:

"Since 2010, Greenaid Seedbombs has been committed to making guerilla gardening more accessible to the general public with a growing line of seedbomb products that allow anyone to plant something in their local neighborhood or yard."

Patty is curious to know if Greenaid knows that Charles Manson claims to have invented their product? You might also be asking yourself right about now, what the heck goes into those bombs, anyway? ATWA has their original, unpatented recipe for you, right here:

Directions: Mix the soil, clay and 1 part water thoroughly. There should be no lumps. Slowly add more water until the mixture is the consistency of the toy store molding clay that comes in a can. Add seeds. Keep kneading the dough until the seeds are well mixed in. Add more water if necessary.

Take small bits of the clay mixture and roll into ball about one inch in diameter, or desired size. The balls should hold together easily. If they’re crumbly, add more water. Dry seed balls for 24-48 hours in a shady place before sowing or storing. They store best in a cardboard box. Do not use plastic bags." 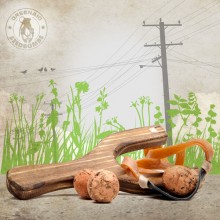 Of course, if you don't want to make them yourselves, the people at Greenaid will surely oblige. They do not have any M80s or paintball guns on their website. You can, however, get a slingshot! And they appear to be doing socially responsible things with their profits, so good for them.

And...for those of you who like the ooEEoo as much as Patty does, you will be interested to know that the vending machine was gone within an hour after Patty photographed it. No, really! Was it real, or just a dream? Did photographing it make it disappear, like a quark? Did Mr. Patty drop Orange Sunshine into her coffee this morning? A quick email to Patty's friend confirmed that her coworker's husband took it home for a weekend block party. So, sometimes a seed bomb is just a seed bomb, as they say.

Thanks to Stuart and A.C. for the heads up about the redesign and official California non-profit 501(C)(3) status of ATWAEarth.com.