Take the Back Alley to Langley - Part Two

This is a quick section. Just a little fact check on O'Neill's version of Whitson's early years and we'll be out the door.

Whenever I decide I've discovered the most interesting person in this study, a new rabbit hole opens in front of my fingertips, and down I go. Without fail, I search every time for a starting point long before the subject enters our realm. I need to see them as people.

I look for the usual stuff. Hopes. Dreams. Were they loved?

Truth be told, love isn't something I always find on these dark roads. Imagine if some connection existed between unloved children and bad outcomes. Talk about possibilities.

I'll stop there. Bootstraps arguments are pointless. We've already had them and it's not like monsters and heroes appear fully formed the first time they emerge from the shadows anyway. That stuff only happens in movies. In real life, monsters and heroes walk beside us every step of the way.

Online, I followed Tom O'Neill's research team to Reeve Whitson's relatives. Figuring out who's who isn't super hard. Crime dogs always stop when they discover someone they can call. Paper trails only need to stretch that far.

Here are the things I found while attempting to confirm O'Neill's backstory on Whitson. Thankfully, my ride through history was easy this time. None of the snow was unplowed.

Reeve's father was a circus performer in a successful family business. He had representation in the Big Apple. 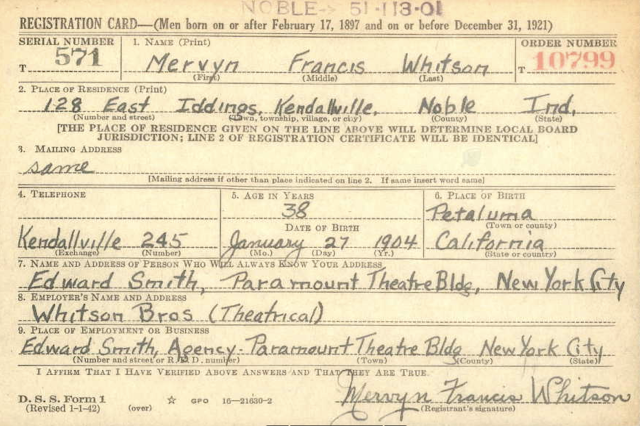 Reeve's mother took him to London while she worked. I thought she was an actress but O'Neill says she's a dancer. He's probably correct. 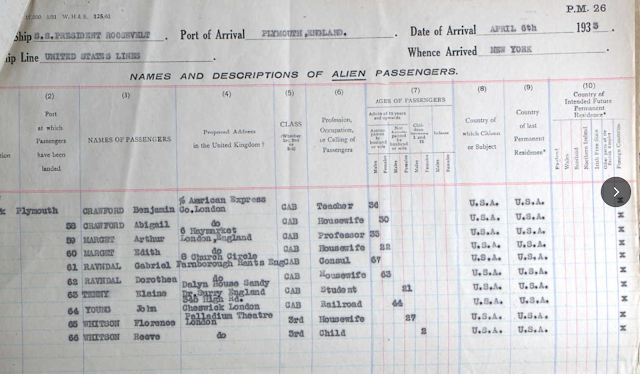 Whitson took part in school activities you might expect from the son of performers. Drama. Singing. Instruments. He also stayed fit. All in all, Reeve was a handsome overachiever. I found an honest smile in almost every photo. 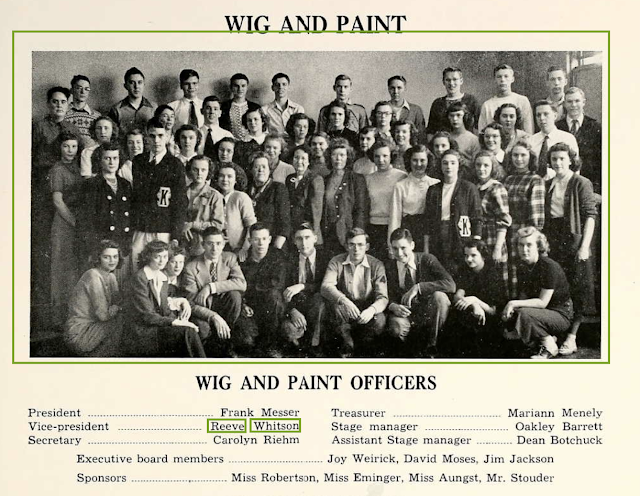 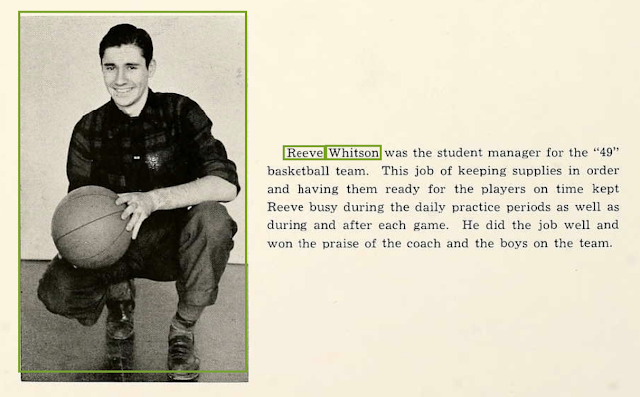 This one will make Tobias happy. Whitson ran Track!

O'Neill tells us in Chaos that Whitson went to Indiana University after high school but I couldn't find anything. Someone has locked down several Whitson photos online. That cruelty knows no bounds.

Buntline, where for art thou? An ROTC type photo would be fantastic right about now.

My research into Whitson's backstory made me feel like O'Neill didn't fudge anything. I didn't expect any funny business but found myself pleasantly surprised nevertheless. I'll be back with more screen caps from Whitson's public life in subsequent sections. For now, let's leave Whitson in the stands of an early 1950's Hoosier basketball game and jump to 1969.

At least this time, the person actually exists. See you in Part Three.

Take the Back Alley to Langley - Part One

Did photographer Shahrokh Hatami doom Sharon Tate and her friends one March morning in 1969 after a confrontation with Charles Manson at the Cielo front door? Were Rudi Altobelli's tenants cursed that evening when the Rudi told Charlie he'd be in Italy for a year after Charlie stood in front of the guesthouse and said he'd like to talk more in the future?

Was Manson even there that day? Hatami wasn't sure. Mighty Max Frost, I am reaching out with my mind. Beep boop tell me what Rudi said.

Today, we're exploring Tom O'Neill's claim that a possible CIA agent named Reeve Whitson has been left out of the Manson study history. According to O'Neill, after hearing Hatami's story, Whitson delivered his friend Hatomi (and his Ides of March tale) to Prosecutor Vincent Bugliosi, and then sat in on the unrecorded interview.

-  Here is Hatami's backstory in case you think he's some hanger-on with a fancy camera who took a two year degree at Santa Monica College after UCLA laughed at his high school GPA and asked him to jump through hoops before achieving main campus status. Hatami was no state school guy.

During the trial, Bugliosi argued that Hatami's high-handed dismissal at the Cielo  to the guesthouse sent Charlie over the edge. Bugs asked about Hatami's aggressive posture, tone, and had him describe how he jabbed an index finger toward the guesthouse when dismissing Manson.

- Here's a newspaper article from a courtroom reporter (via the almighty) if you are new to our study or desire a quick refresh on Hatami's testimony.

Others weren't so sure about the encounters. Filmmaker and author Robert Hendrickson smelled a rat and believed Bugliosi needed those March 1969 confrontations to convince the jury Charlie visited Cielo before the murders took place and had an axe to grind after the Hatami and Altobelli brush offs. Hendrickson was so passionate about about Bugliosi's duplicity that he continued his argument across two Hatami posts in our blog library.

- This video in Matt's post from 2014 shows Sharon and Hatami in better days. Hatami is the shirtless hunk. Sharon is as pretty as pretty gets. Hatami's girlfriend is hanging around because she's no fool.

That fateful day in March, Hatami takes the chivalry route when an uninvited man reaches the Cielo front door. Not shocking. Manly man exhibitions in front of attractive women have always been a thing, even if sometimes it's only pretend.

According to author Tom O'Neill, Hatami first shared his Charlie encounter story with possible CIA agent Reeve Whitson. The son of an actress and a circus acrobat, Whitson enters our story when Tom O'Neill has Whitson phone Hatami early that Saturday morning we all know so well before anyone else discovered the bodies up on Cielo.

In O'Neill's Chaos, Whitson claims to friends he was the CIA surveillance team watching the Cielo house. He was supposedly on the scene early that fateful Friday but didn't stick around. According to his friends, Whitson forever lamented his inability to prevent the killings.

We need to back up a bit because things are already not making sense. How does Reeve Whitson, a rumored CIA super spook, find his way to the Cielo crowd?

Bugliosi never mentions Whitson in his book, but Chaos provides insight. According to O'Neill, Whitson might've bonded with Sebring over race cars. And Whitson's mom was good buds with Doris Tate. Third, O'Neill writes, Paul Tate told him Whitson was a friend to himself, Sharon, and Roman.

So there's three hows. Whitson maybe became a family friend after meeting Sebring at the track. Unfortunately, answering my first question created a second. Why was Whitson surveilling his good friends?

Reeve Whitson was an archconservative on an anti-drug mission. By some accounts, an ounce of blow was found in Jay Sebring's Porsche the morning following the murders. That's more than a personal stash, Idgaf who you are. An ounce was enough to get half the houses on the block trembling while searching for the man through their bedroom blinds the night of August 8th. Was Sebring doing deals out of the Cielo parking lot?

* We know Jay sold little baggies out of his briefcase

** Let's pause for reader corrections on the amount of cocaine found in Sebring's car, and also to give others a chance to describe how much blow they snorted some random Friday night in the 80's at a Huey Lewis concert.

In addition to what is linked above, we're using newspapers articles, Helter Skelter, and Tom O'Neill's Chaos. Feel free to add links to any supporting or counterarguments in the comments below the posts.

Most of O'Neill's research we're discussing in this piece is found in Chapter Six of Chaos, titled Who Was Reeve Whitson? I'm using the Kindle version. You should explore digital searching if you don't already. Yes, chopped down trees feel great in my hands, but they are garbage when I wonder how many times Whitson is printed in the text (150).

Or Hatami (43). Btw, O'Neill doesn't care which version you buy. Both cost about the same.