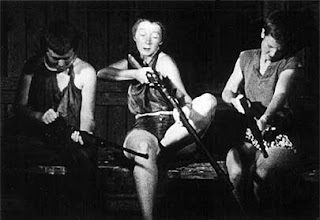 "The thought of justice as being Jesus Christ dying on the cross is nearing completion," said Catherine Share (Gypsy) 30 years ago.

"When it comes down, when the balancing, the last WAR, the battle of Armageddon everyone will be fight'in over what they think is valuable," said Steve Grogan (Clem) 30 years ago.

"Everybody's ready, everybody's got their guns together. Most people do and everybody who doesn't, should," said Brenda McCann 30 years ago.

"And they know it's gonna happen, they know," said Lynette "Squeaky" Fromme 30 years ago.

But, what no one else understood then, was that the Manson Family was talking about September 11, 2001, the real beginning of "Helter Skelter."

So that you might understand now, we have to go back, over 30 years, to when Charles Manson was serving a ten year sentence for a bad check. It was the middle 1960's and the Vietnam War was becoming the mainstay for selling newspapers and punishing heathens.